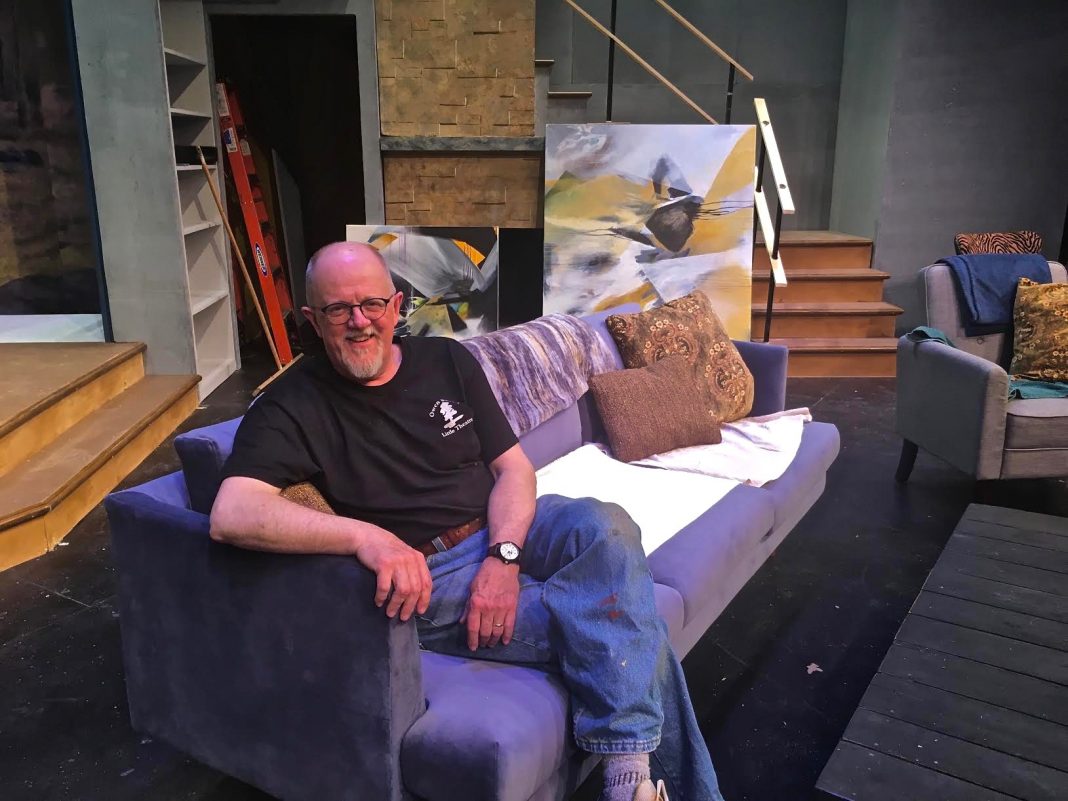 The arts are a funny subsect of society. Everybody involved in making something steeped in emotion, whether that be the written word, music, film, visual art, sculpture, or theatre, has a love/hate relationship with trust; in themselves, and sometimes even in others. It’s not that artists can’t or don’t trust – quite the opposite, it’s how they choose to demonstrate and challenge preconceived notions of trust that strikes me as interesting.

Take seasoned Owen Sound Little Theatre director Bill Murphy, for example. For months and months, he’ll toil with a script, wrap his mind around innumerable mental scenes, transition his inner thoughts into the physical realm by trusting his crew to build and construct a set, outfit his cast, and then he’ll linguistically coach and mentor the entire team.

He’s been doing such things for the last 5 months as he and his crew ready to take the stage for the second curtain call of The Long Weekend at the Historic Roxy Theatre this week.

“The two of them have done the lion’s share of the set. Brodie just did the 25th Annual Putnam County Spelling Bee set for us,” says Bill as we chat in the lobby. At first glance during a production walkthrough, I’m blown away to learn the art deco chimney is actually painted – the meticulousness of its final design is more reminiscent of an urban big-budget production, rather than a rural theatre. Kudos to its painter, Terry Burns, and her team.

But that’s the charm of the Roxy – it hits above its weight and always has. It’s the overwhelming sense of commonality instilled in the theatre community from Owen Sound that has learned to trust one another, and that environment is shrouded in such immense positive energy that it’s nearly impossible to produce anything less than stellar.

At its heart, Murphy’s production of Norm Foster’s The Long Weekend is about the complexities of relationships; performance – intellectual, sexual and otherwise; and confidence.

“It’s fun. It’s a very fitting climax to our year of comedy. It’s such a clever show in terms of its wordplay and character development, and its twists – I think people are going to be very entertained,” says Murphy.

The play was recommended to Bill by a friend who had seen the show and told him they couldn’t stop laughing. Bill read a PDF copy of the play and began the process by submitting the idea to the play-reading committee at the Roxy for approval. It was approved and auditions started back in January. Rehearsals start with a grueling pace of 3-4 nights per week where actors develop a rhythm and relationships with one another; lastly, they practice timing, oh so critical with a comedy.

“I tend to break a play into units,” says Murphy. “Based on the characters on-stage – either that or the action that’s happening. This ended up with 18 different units. We jump around depending on who’s sick or who’s busy… We go at it pretty hard. We probably put in over 100 hours of rehearsal and we don’t get in here ‘til 10 days before the show opens.”

I want to know more about the direction of a play. I’ve got a few film director credits to my name, but I can’t fathom how one could do all this legwork and then simply wash their hands of the process by letting the crew take off on stage. There’s no chance to edit. No chance to rewatch, tweak, manipulate, or alter a play. What you see is what you get – and as a fellow artist, I’m both perplexed and captivated by the level of trust that theatre must adhere to.

Maybe I just don’t trust in people enough. *My therapist rolls her eyes reading this.*

“I’m a tinkerer. You can always tighten up the timing, blocking moves and so on. So what’s the difference between theatre and film? You can do a close-up in film. You can’t do that here,” says Murphy. “Composition is crucial – where actors stand on the stage – you have to remind actors when they’re not speaking to not do anything distracting or take the focus away. You’re always working on that – where should the audience be looking; how do you structure your picture.”

I guess that’s why they call it community theatre. Not because it’s located in the community – but because it takes a community to put on a killer show. It takes an undeniable sense of community to develop that kind of trust. It’s about relationships; and so is this final play of the OSLTs 2019 comedic season.

You can catch the last performances of The Long Weekend on July 5-8th in downtown Owen Sound. Contact the Roxy Theatre Box Office for more info.