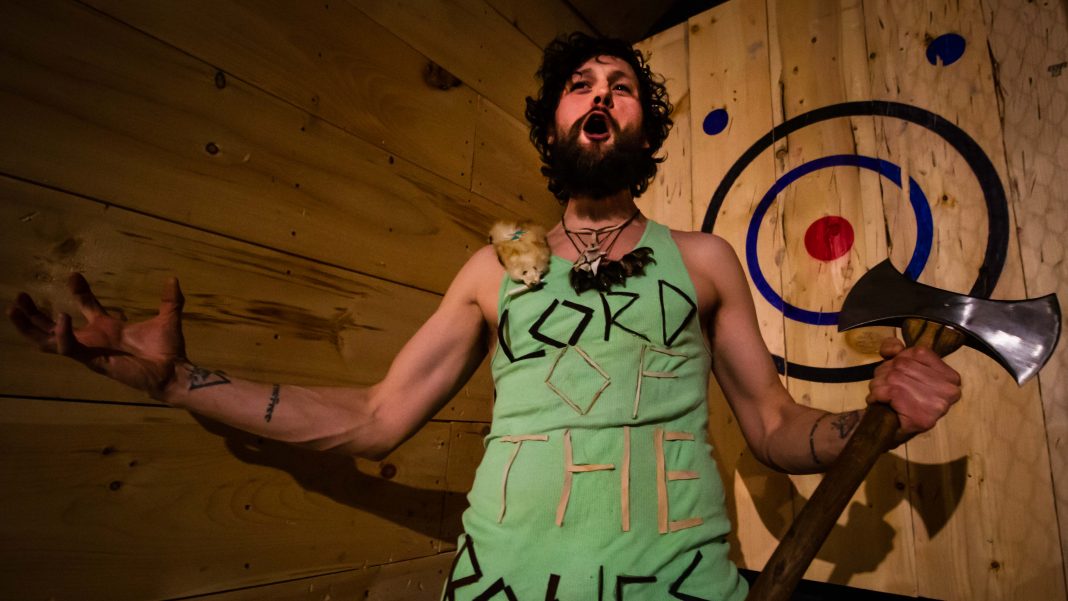 Editor’s note: It is strongly recommended that the reader play one of the following pieces of music while consuming this article: – Krigsgaldr, by Heilung – Ivar’s Revenge, by Danheim – or Tyr, by Wardruna (skip to around one minute in on this one for maximum war horns).

It was late 2018. There was a feeling in the air. An ancient wind was blowing. It shrieked and howled a savage message up and down the County of Grey. I heard those howls and knew, deep in my creaking bones, that something was afoot – something fucking awesome. I immediately started letting my beard and hair grow.

The wind carried news of something fierce, something primal about to be unleashed upon the sleepy town of Thornbury. War horns blew, weapons clashed, battle cries echoed o’er the hills – for axe throwing had come to the Blue Mountains.

Throwing axes have been in use since the prehistoric era, perhaps reaching their deadly zenith in the hands of 3rd century Franks, yet it took two forward thinking entrepreneurs – Melissa and John Herod – to bring this ancient practice to the good people of Grey County.

First, and to great success, the Herods launched the AXED Mobile Throwing Club (they will park on your street, at your wedding, or at your winery – more on that later – and let you hurl axes ‘til Ragnarök comes). Next, they turned their gaze to downtown Thornbury and thought “How can we make this scenic little town immeasurably more badass?”

The answer was the AXED Throwing Club.

Manifest in a gorgeous four lane throwing hall, complete with bar and stools, AXED is open for business and ready to help you tap into your inner Viking. Speaking of Vikings and readiness … after four months of beard and hair growing, after handcrafting several pieces of bone jewelry, after a winter spent leaning into fierce winds wearing a handmade arctic fox fur scarf, I too was ready.

The Norse Gods, no doubt respecting the coarseness of my beard and weirdness of my scarf, engineered a fateful meeting between myself and Melissa of House Herod. She was in search of kickass local businesses to form tight bonds with. I, in my role as Chief Warlord at Coffin Ridge Winery, was in search of a team building exercise that would build my team while simultaneously allowing me to fling razor sharp weapons about.

Truly, a match made in Valhalla.

And so, our fate was sealed. I would assemble my warlike team of employees for a night of axe throwing. Melissa and John would provide the perfect venue for us to unleash our inner berserkers. Yet, as he so often does, the trickster god Loki intervened.

In this particular instance of trickery, Loki recruited Skaði, the jötunn goddess of winter, to waylay our plans. Skaði blew in a mighty winter storm on the very day we were to gather, wearing our Nordic finery, to hurl axes. Humiliatingly, we were forced to reschedule.

Perhaps owing to this humiliation I resigned as Chief Winery Warlord, and took a position elsewhere. Following my resignation, we rebooked our date with axe throwing destiny, and converted the night from a team building exercise to a majestic send off in honour of my 10ish glorious years at Coffin Ridge.

We arrived in our most impeccable vestments. I in my cloak and arctic fox scarf. Janet, bedecked in bone jewels and witch cowl. Joel, stuffed into a sequined dress and golden women’s flats. Nicole bore her grandmother’s raccoon fur cap. Michael managed to squeeze his hulking Viking frame into a suit two sizes too small. Matt (after asking his wife’s permission) tore his humble plaid shirt away to reveal a shockingly wiry frame. We were truly a sight to behold.

Melissa had made the unfortunate decision of inviting her mother and father in to see her new business, in an effort to show how they’d been embraced by the upstanding local citizenry. I noticed her poor parents slinking away, shell shocked and confused, shortly after our arrival. If they should happen to read this, I’d like to point out that we were not an average booking.

After quick and effective training by Melissa and John, we divided into two teams and set about reaping glory and humiliating our foes. The rules were laid out by our hosts – the first team to 47 points would be victorious. My team lagged behind for the first half of the contest, a shocking development, given my righteous beard and flowing cloak. Yet, through great might and perseverance, team “Just the Tip” caught up to our foes until finally, fate handed me three axes and one chance.

We stood at 41 points with our opponents snapping at our heels. My first throw spiralled off into gods know where, flopping shamefully to the ground. Realizing the direness of our situation, I uttered a hasty, drunken, and thoroughly pagan prayer to Odin. I offered my firstborn (sorry Isaac) to the Lord of Asgard in exchange for glory on the field of axe throwing battle. My next throw struck true and deep, earning Just the Tip 3 points, giving us 44. My competitor, a worthy foe, then threw a perfect bull’s eye, eliciting cheers and jeers from their team.

With the weight of this world and the next on my shoulders I stepped to the line. Sweat coursed from by brow, my palms, and my pits. My fancy cloak and hipster beard were soaked with it. I grasped my weapon in both hands, feeling the gritty texture of woodgrain in my palms, knowing that glory lay but one axe throw away.

I rushed forward, my cloak billowing behind me, my axe raised in fearsome readiness above my streaming mane. I loosed my weapon … and the one-eyed god smiled.

I swear to you, with this breath until my last, that Odin himself reached down from his Asgardian throne, took hold the haft of my axe, and guided it straight and true. My wicked blade buried itself deep in the target, earning team Just the Tip 3 more points, for a winning 47.

It earned me untold glory, a place of honour in Valhalla, and the undying respect of my former staff.While I cannot promise that Odin will smile upon you as he did me, I can promise that AXED will deliver an unforgettable experience. Visit them at their truly beautiful throwing hall in Thornbury, or at one of three upcoming axe throwing nights at Coffin Ridge.

Look for me there, a grizzled veteran standing smugly on the field of battle, bearded and bedecked in fox fur, offering unasked for advice and swilling cider.