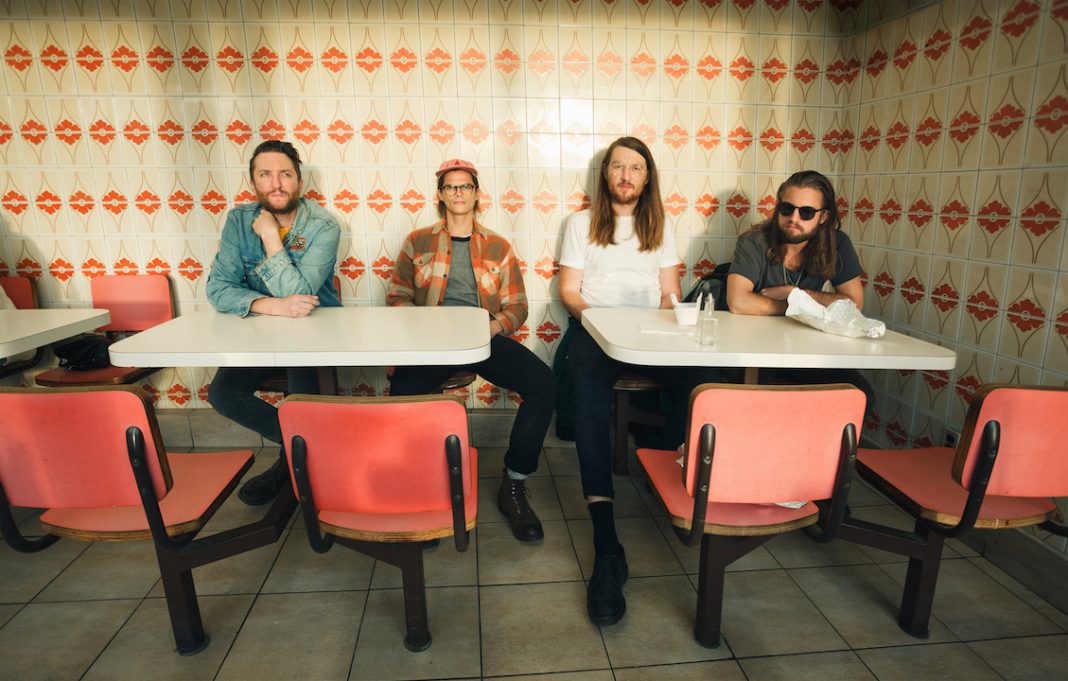 The name of The Wooden Sky’s most recent album is taken from the words of Frank Herbert’s novel Dune, paraphrasing “survival is the ability to swim in strange waters,” which could allude to the band’s ability to constantly immerse themselves in different musical waters – they’ve been called everything from indie, folk, rock, country, pop – but they’re not a band that has merely just survived – they’ve succeeded in making music their way and building a fan base that delights in the poetic, earnest songwriting of lead singer/guitarist, Gavin Gardiner.

Fans often approach Gavin after shows to discuss specific songs, which is a part of the creative occupation he feels blessed to occupy. Making music has a distinct energy he often alludes to but can’t seem to pin down. He’s called it ‘magic’ among other terms but the closest you’ll get to understanding it is by watching their Massey Hall performance, one that he maintains is the band’s high water mark.

“It’s a legendary venue for a good reason,” he says during our recent interview. “It sounds awesome, it’s very professional, people treat you well, and it’s so steeped in music history.”

But the best way to understand the energy Gardiner describes is to see them play live. You may have missed your chance to see them at Massey Hall, but if you live in the Georgian Bay area, you’re going to have a chance to catch them at Heartwood Hall on March 23.

The band’s never played in this area, so they’re excited to grace the stage at the beloved Owen Sound venue and solidify a fan base here. There’s been a buzz surrounding this show for some time now, and this is the kind of caliber band that can live up to the hype.

Gardiner admits he’s only been up this way twice before: once to buy audio gear at an auction, and once for a writer’s retreat. He likes to get out of Toronto for long periods to write, possibly a return to a more rural setting like the one he grew up in in Morden, Manitoba.

“I need to leave a lot of the time,” he says. “It requires a lot of focus….it takes a while to get the blood flowing to that part of the mind again.” The band has been touring for Swimming in Strange Waters since its release in 2017 and they feel it’s time to get going on a new album – which doesn’t have a clear sound yet.

Will it have the upbeat Arkells rock vibe of Let’s Be Ready, or the Strand of Oaks indie folk feel of Every Child a Daughter, Every Moon a Sun? Or the raucous country energy akin to the Constantines and Sadies that made Swimming in Strange Waters such a textured album?

“Ask me in six months,” Gardiner jokes. But he divulges it’s feeling like more of an acoustic album. Audience members at Heartwood may hear a few new samplers and can judge for themselves.

But when it comes to writing songs, it’s as much about Gardiner’s relationship with time as it is about finding solitude. He doesn’t always have to leave Toronto. “I can feel [that] way in the city if I have an escape somewhere.” When he says , he’s talking about shedding the technology in our palms and pockets that us distracted throughout the day and unable to let the creativity in.

Not only does this new technology distract us, but it takes away some of our struggle – which can be hugely important for personal growth. He laments about the days when the band would get lost in European cities on the way to shows, and how he misses that adventure and the romanticism of danger. Now they just use GPS to guide them to each show seamlessly. They make the show with plenty of time, but they lose something in the process, he offers.

But he jokes there are many good things that technology brings. I mean, we are having this conversation remotely. It’s a tool and it has it pros and cons.

“I’m just guilty as everyone else,” he says about letting technology distract him, so he is careful to find times when he can let his filters fall away. He takes daily walks with his wife and dog through Toronto. He likes to run. And he is often on the road. These are all times when songs come to him, and he prefers it that way as opposed to trying to chase them.

Many of the concepts we’re discussing can be found in his songs – the pleasure that comes from struggle, for example, is the idea behind Life is Pain, Pain is Beauty. And while he seems like a guy who has a lot of insight about the world, he admits that songwriting is never easy.

“I’ve written a hundred songs in my life, maybe more, but every time I sit down to write a song…I feel like I’ve never done it before.”

When he sat down to write the song The Wooden Sky from their early album When Lost at Sea, they were actually named ‘Friday Morning’s Regret’ and were quick to adopt the new name. If they label themselves after a song name again, he suggests it would be Malibu Rum. I think that Deadhorse Creek might fit too.

“Band names are the worst,” he jokes.

I think The Wooden Sky is a pretty great name, though. It’s a good match for their sound: earthy and lofty.

You can still find tickets for their highly-anticipated March 23 Owen Sound show with special guests, Casper Skulls, at Heartwood Home and at Ticketfly.

Roughing it at Back Forty Glamping