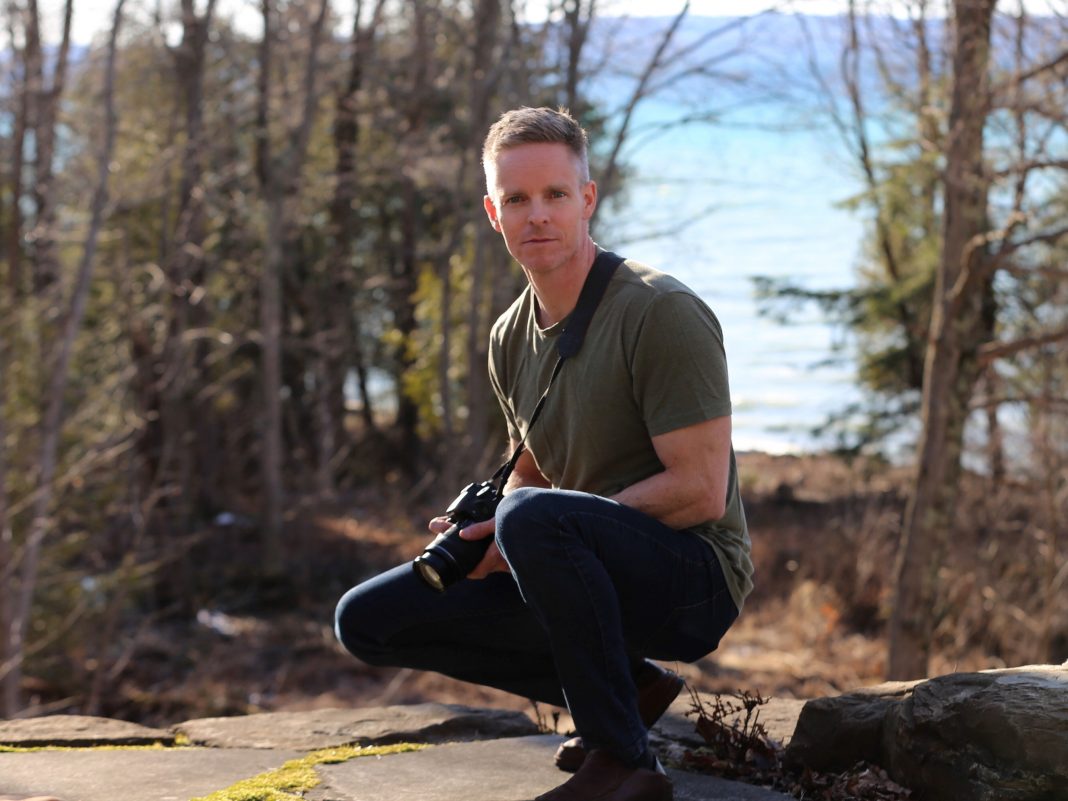 Stu Manwell drives himself to work every morning. His commute is a scenic, if rather long one. It begins on a tree lined slope overlooking Georgian Bay and takes him up hills and through fields, past a farmhouse or two. It ends in the surgical ward at Grey Bruce Health Services, Owen Sound. It is a commute that I drove in reverse for a decade, albeit to a markedly less lucrative, if no less engaging, career as a barkeep.

The main difference between Stu and I is that where I saw a reasonably pretty but tedious commute, Stu sees opportunity. To be honest that may be a tad reductive. There are many differences between Stu and I. And since I know you’re wondering, here are my Top Three Differences: Stu prefers to be known as “The Duke of Funk”, I do not; he designed and built his gorgeous home, I struggle to erect a sturdy tent; Stu enjoys backcountry snowboarding atop avalanche prone mountains whereas I choose life. For the purposes of this article, however, we’ll focus on our differing perception of the same rural landscape.

In my defense, the opportunities which Stu spots during his commute are easily missed. The blade of a fern struggling to unfurl. A wisp of grass seeming to cower before an oncoming storm. Stu is a photographer, a deeply opportunistic one. He keeps his gear handy on his commute and if he glimpses a promising image he’ll hastily pull over, grab his kit, and chase it down. Picture the respected surgeon knee deep in dewy grass: he leans close, intimately close, to some twig. Squinting down the barrel of his camera lens, he sways about arrhythmically, trying to find the right angle from which to capture the twig and the glow of dawn behind it. The hazard lights of his car blink, as does a passing farmer, bewildered by the scene unfolding beside him.

Having grown up in Fort MacMurray, and now a proud resident of the GOSA (Greater Owen Sound Area), Stu first took up his camera in an effort to connect with the natural beauty of his adopted home. Mirroring his preferred subject matter of simple natural beauty, Stu eschews editing software and employs only the camera itself in the creation of his images.

Having honed his craft over the last five years, he is now widening his focus from connecting personally to his natural surroundings to enticing others into making that connection through his images. If you’ve found yourself at the Owen Sound Hospital of late, you have likely already admired some of Stu’s work, and I am not referring to Aunt Eleanor’s shiny new hip. His images are mounted on walls throughout the building, and this is in many ways a perfect home for his shots given their soothing, peaceful nature.

Thankfully you needn’t break an ankle or rupture a spleen to enjoy Stu’s work. He is currently one of the guest artists at the Owen Sound Artist’s Co-op. Find a selection of his work, realized beautifully on printed canvas, at the Co-op for the remainder of April. It is a well curated selection, representing his preferred photographic techniques of macro, long exposure, and astrophotography.

If it hasn’t been purchased yet, I strongly suggest paying a close eye to his print titled “Five Seconds of Peace”. It is a scene familiar to anyone who has spent time on the Bruce Peninsula. Jagged stony shores frame Georgian Bay as it stretches out in its majesty to the horizon. Some dude sits perched on an outcropping contemplating the meaning of it all, or more likely chasing Instagram glory with the classic “feet dangling off rock” shot.

But look in the near foreground – in the shadows at the bottom of the frame. You’ll see a man apparently at his ease in the shade. But he is not at ease. This man is a good friend of Stu’s, and both of his ankles have just been broken. He simply can’t bring himself to tell Stu yet, so he sits in the shade waiting for the doctor to stop playing with his camera. But the thing about long exposure photography is that it takes a long time, and the thing about friends, even doctor friends, is that they will not believe you when you tell them you’ve just broken two ankles.

Long story short, Stu and his hapless friend remain close. Long article short, stop in at the Co-op to check out Stu’s work – it’s there until the end of April. If you miss the show don’t fret, you can find Stu’s work online, and there is always something gorgeous to admire at the Artist’s Co-op, many things actually.