It’s summer time again (thank god) and we’ve decided to help you out with that summer reading list you’ve been deliberating over.  Here are a few books the Rrampt crew has been reading lately, and since you’ll likely get thirsty while furiously turning pages in the sun, we’ve also listed the craft beer we think would best go with each read.

Sarah’s Pick: Misfit woman buys a motorcycle on a whim, accidentally kills a woman’s cat, befriends that woman, and the pair set off on a cross-country road trip fueled by sarcasm, estrogen, and dysfunction. A must-read for anyone who has ever wanted to say “fuck it” and just ride off into the sunset. Pair it with Northwinds’ Trailblazer. Aside from the highly appropriate name, it’s a brew that’s as smooth as you want your escape to be.

Nelson’s Pick: It’s very philosophical in an assailing kind of way, and hugely experiential. As the trip continues, the book pairs with different beers. When Che is home in Buenos Aires – pair with Royal City’s Two Rivers: familiar, homey, and mellow. Then when he’s on the road witnessing some pretty stellar economic injustices and class struggle, pair with what’s left of Kilannan’s Xanadu – an homage to excess, and a sobering reminder of how there can always be too much of a good thing.

Jesse’s Pick: This book was introduced to me on a canoe trip last summer by some good buds. I respect their choice in reads, so I took on this mammoth sized book about an escaped bank robber on the run in India in the 80s. The writing is descriptive and the characters are drawn out well. But overall, the story is fascinating and will keep you entertained. It’s a book that will be your summer companion due to its length, and it’s a good companion to have. I’d have to pair this one with an India Pale Ale for obvious reasons, but because so many breweries do an IPA, I’ll have to narrow it down to one that fits the convict theme: how about Hops and Robbers? Done.

Sarah’s Pick – It’s a raw, lyrical, honest story of his life as he struggles with family, his own muddy history, his journey into music, and addiction and recovery. Given the fact that he’s a recovering alcoholic (and I’m not really a beer drinker, anyway), I’m going to say the only thing to pair this with is some nice weed. Are we allowed to put that in the article??

Ana’s Pick: We’ll All be Burnt in Our Beds Some Night follows the story of the unlikeable character, Johnny Keough whose life can only be described as every parent’s nightmare. Amidst the substance abuse and the chaos, Johnny is charged with assaulting his girlfriend. It seems he’ll follow his father’s steps to maximum security prison but on a twist of fate, the victim doesn’t show to court and is soon found dead. Johnny is presented with an opportunity for a different life, and dragging himself out of Newfoundland, he goes on a journey across Canada. With a broken heart, body, and mind Johnny’s voyage is treacherous and sad. This book is a story about a guy who has all odds stacked against him, it isn’t about redemption or a charismatic character. It is about being alone and afraid. In terms of a craft beer pairing, Barrie’s Redline Brewhouse has a series that would be fitting for a journey across Canada. 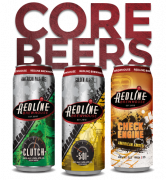 Skinny Legs And All by Tom Robbins

Megan’s Pick: While Rrampt freelancer Megan Myles admits she hasn’t been reading as much as she’d like (she only runs a busy hostel and works a full time job!), she’s always been a Tom Robbins fan and just finished Skinny Legs and All, a book that she thinks would pair nicely with the Side Launch Sour available on tap at Mudtown Station right now as it’s “unusual, surprising, refreshing, deep & complex” 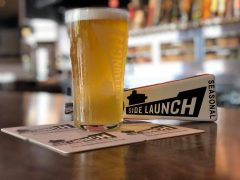 The Owen Sound Little Theatre is back!