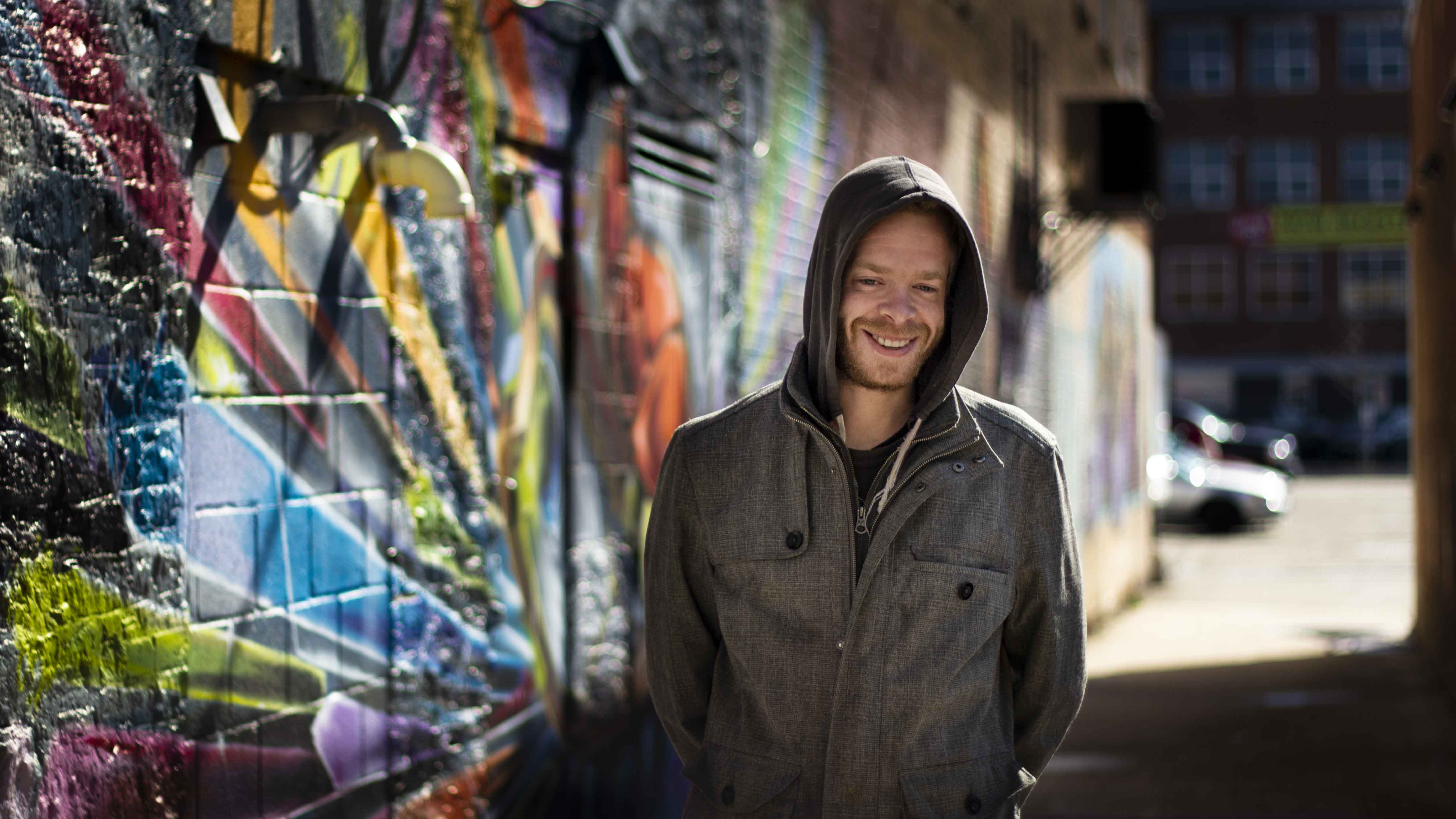 Billy Goodkat. While it’s possible you don’t know his name, you certainly know his work.

Billy is the mad Irish genius behind much of the exceptional spraypainted imagery you’ve seen on storefronts and alleyways all over Owen Sound. He’s also a community focused individual with a great passion for cultivating artistic talent in others. We met up in a quiet corner of Jazzmyn’s recently to talk art, passion, and Guinness. Upon entering I’d purchased a pint of the dark stuff from a kind and meticulous server who poured draught as though she was born to do it.

Art is Billy’s passion, and I guess Guinness is mine.

A Belfast man originally, Billy made his way to Owen Sound in 2011 in the pursuit of love. I learned later that the talented Guinness pourer out front is his wife.

Billy honed his artistic style on the streets of Belfast, in an area designated for legal graffiti (butt out coppers), as well as at Southampton University, where he attained a degree in Fine Art and Illustration.

One does not attain a degree in Fine Art solely by wielding a can of spray-paint, and Billy does not limit himself to this medium, but he does prefer it. He loves the grand scale, where a two-storey building becomes his canvas, and he enjoys the challenge of conveying a message using only imagery.

Much of Billy’s prominent work in Owen Sound has been for downtown business owners. Next time you’re stuck in traffic after crossing the 10th street bridge, check out the mural at Oregano Bistro (formerly Villa Nana’s). Let your traffic woes be soothed by the idyllic scene – an open inviting window, lush sprawling grape vines, bakers at work by the hearth.

Dr. Cobbler’s on 2nd Ave East is another arresting piece, and it represents his first effort to require scaffolding. Says Billy: “I used to have a fear of heights, then I went up there and I was fine.” Main street is a better place for Billy having conquered his fear as the work on the 2nd storey is very lovely. Vibrant swaying peacock feathers overlay two distinct black and white patterns – give it a good look next time you’re downtown, you’ll appreciate it.

Beautifying store fronts is not Billy’s only game however. He’s been the mastermind behind a few high profile installations involving local students as well. You’ve no doubt seen, in recent years, the incredible transformation of “Artist’s Alley” between the Bleeding Carrot and the Milk Maid. This partnership between Billy, Community Foundation Grey Bruce, and the Artist’s Co-op saw him mentoring local students and encouraging their artistic growth. Not shy about his passion for inspiring others, especially youth, Billy says: “People don’t realize how much ability they have, if you show them a few techniques, they waken to the fact that they can do it. Someone might say they can only draw stick figures, I guarantee that given an hour you can show them they can draw a great portrait.”

Billy is certain that within each of us lies a latent artistic talent, needing only to be kindled and nurtured before it blossoms into something extraordinary. How certain is he? Well he’s been running a series of successful Art Nights specifically designed to provide the kindling spark needed to fire untapped artistic potential. These fun, informal evenings are both an ideal entry point for neophytes and a great next step for those with some experience under their belt. Her Wellness in downtown Owen Sound is hosting two of Billy’s Art Nights this May – on the 9th and 24th starting at 7pm.

Find tickets here or at Her Wellness on 2nd Ave. East. Still need convincing? Besides Billy’s infectious charm and breadth of knowledge the ticket includes food and drinks, AND you leave with a finished masterpiece of your own creation.

Oh. And as for Guinness? Billy patiently informed me that by 1886 it was the world’s largest brewery. He laughed at me when asked if it is drank widely in Ireland and generally tolerated me slurping it noisily while he passionately described his love of “graff”.