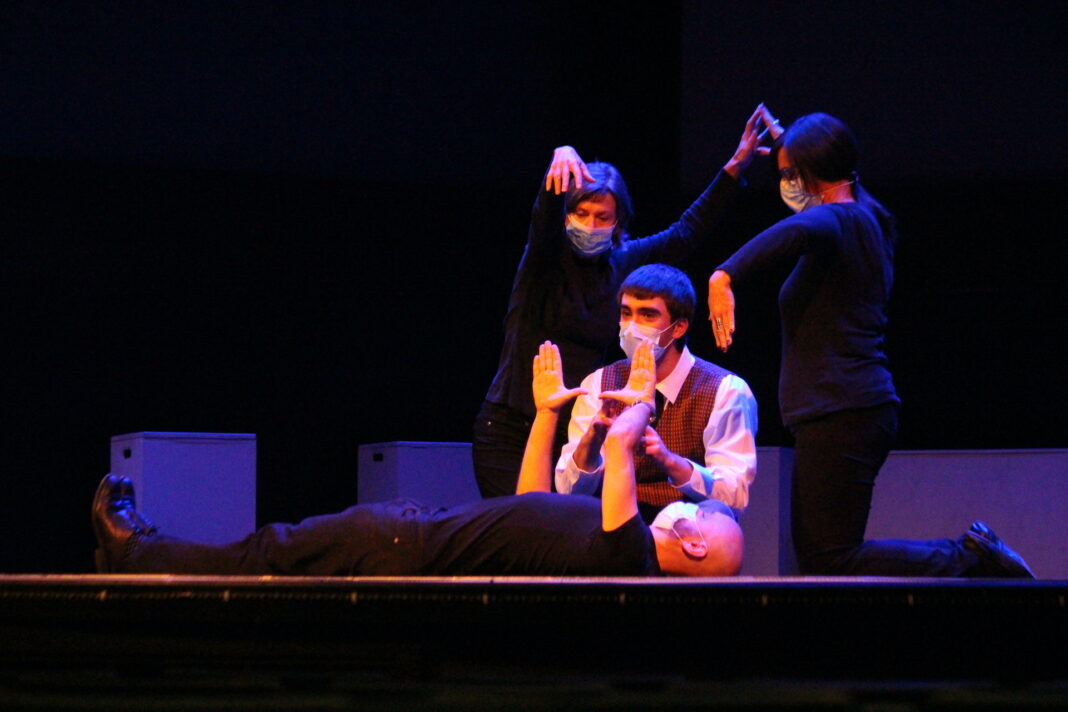 It’s a chilly autumn evening when I step into the warm glow of the Roxy Theatre lobby. The space is rife with anticipation as the cast and crew of The Curious Incident of the Dog in the Night-Time shuffle boxes, check marks, and position costumes in the final moments before rehearsal begins.

With doors opening to the public for the first time since the pandemic hit, crossing the theatre’s threshold feels almost surreal. It’s not the COVID protocol – masks, contact tracing, and proof of vaccination are the norm these days – but rather the fact that I’m about to catch a glimpse of the Owen Sound Little Theatre production that’s been an unprecedented two years in the making.

In March 2020, Curious Incident was mere weeks away from hitting the stage after months of intense preparation. Then suddenly the world turned upside down and put the kibosh on live performance.

For a while, under the guidance of director Pat O’Connor, the cast took to Zoom to continue rehearsing, hopeful that the pause would be short-lived. Even when it became obvious that the show couldn’t go on any time soon, they remained connected and optimistic. Amidst wave after wave, cast and crew waited through uncertain timelines, shifting guidelines, and even a few casting changes. Still, there was never a question that Curious Incident should be the production to mark the re-opening of the Roxy and kick off OSLT’s new season.

Now (finally!), this long-awaited play is ready to take the stage and show the community just how powerful little theatre can be.

Adapted by Simon Stephens from Mark Haddon’s novel of the same title, The Curious Incident of the Dog in the Night-Time follows the narrative of Christopher Boone, a clever teenager on the autism spectrum who sets out to investigate an unfortunate neighbourhood event, but along the way unravels far deeper mysteries.

The play is a testament to resilience – a theme we can all relate to these days. “[The audience] will be drawn to the story… it’s the old story of somebody overcoming enormous difficulties in order to thrive,” says O’Connor, who has put every effort into keeping up the production’s momentum.

O’Connor sees the hunger for live entertainment that is present not just in our community, but also among the cast and crew. “We thrive as a group by being together and by being creative together… We love to do [theatre], so if there isn’t [a show], then that element is missing from our lives,” he says.

Although the long delay in bringing Curious Incident to the stage had its challenges, it also came with an unexpected boon. “Because of the layoff, I’ve had time to re-assess certain parts of the play, and made some changes – sometimes much to the chagrin of the cast, because they thought it was in place, but I like to think they’re improvements… I’ve had some time to get perspective on it and do some tinkering with it.”

I settle into my seat as magic begins to unfold on stage. It might only be a rehearsal, and not quite as polished as it would be on opening night, and the actors are wearing masks for this rehearsal, but it’s clear that this production will attract serious attention. From start to finish, Curious Incident delivers an engaging story with dynamic poignancy.

The actors, many of whom are OSLT veterans, showcase their skills throughout the fast-paced scene and character changes, all the while keeping honest emotion at the forefront. And while the set appears sparse at first glance, it comes alive through lights, visual projections, sound, and the actors themselves. This is a play that compels the audience to take on new perspectives as they connect with characters and witness the world through the eyes of a young man with autism.

The authenticity of Christopher Boone, played by OSLT newcomer Nolan Ballantyne, is significant. Ballantyne, who himself is on the autism spectrum, brings the protagonist to life with sensitivity and wonder. As someone who both grew up with family members with autism and is now the mum of a child on the spectrum, I appreciate that the role doesn’t rely on the sensational stereotypes that are too often seen in characters with autism.

Instead, Ballantyne views Christopher’s journey out of his comfort zone as a source of inspiration for others. “No matter what circumstance gets thrown at you, you’ll get through it,” he says.

Likewise, Samantha Colwell-Castles and Steve Byers stand out as Christopher’s mum and dad, offering vulnerable insight into strengths, limits, and the impasses of parenthood. “The challenges of autism from a parent’s perspective are going to come across, and maybe people won’t feel so bad when they don’t always cope as well as they think they should be coping,” Colwell-Castles shares. “I think people can really relate to it.”

From the captivating staging to the utterly human characters, The Curious Incident of the Dog in the Night-Time is a must-see production that will ultimately leave you with a sense of optimism. Celebrate the re-opening of the Roxy and OSLT’s return by treating yourself to a night out to see this fantastic play!

The show runs from November 17th to 20th and 24th to 27th and tickets can be purchased online at roxytheatre.ca