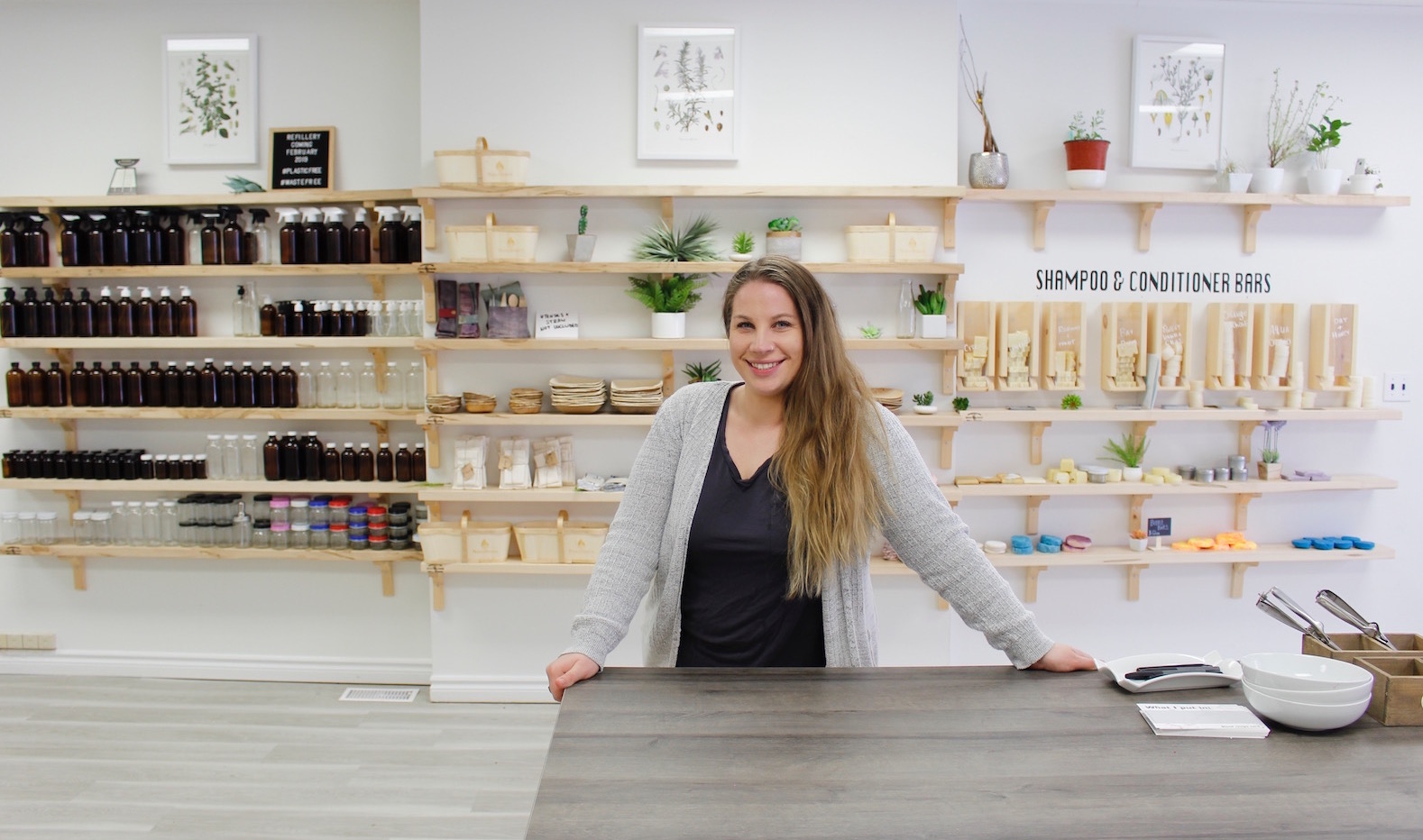 When you hear the word ‘refill’, what comes to mind?

The idea of ‘refilling’ belongs to the new circular economy, one that big companies like Loop and WRAP are betting on for the future. And so are local businesses like NakdBasics in Owen Sound.

The goal: zero waste. The process: closed loops whereby we refill the products we use eliminating the throwaway containers.

Note: this article isn’t about the amount of waste that gets disposed of on a daily basis. There aren’t going to be any numbers, or statistics, or even visuals of garbage-laden beaches. No, what this article is about is a new way of thinking – a solution to waste that’s both convenient and cheap.

The World Economic Forum defines a circular economy as “an industrial system that is restorative or regenerative by intention and design. It replaces the end-of-life concept with restoration, shifts towards the use of renewable energy, eliminates the use of toxic chemicals, which impair reuse and return to the biosphere, and aims for the elimination of waste through the superior design of materials, products, systems and business models.”

One of the companies leading the charge on this shifting business model is Loop, which has giants like Tide, Crest, and Håagen Dazs, on board. Here’s the idea: you buy your product in a stainless steel container, leave it out to be picked up by Loop; they clean, refill it, and send it back to you for consumption.

Sound easy? Sound circular? Sound cheap? It’s all three, and it may just revolutionize the way we consume.

And while New Yorkers and Parisians will get a first crack at this new consumption model, where does that leave smaller communities? Well, this trend is happening on a local scale, arguably the place that it should be happening.

In the near future, every community could have its own refillery station. In Owen Sound, that place is going to be NakdBasics.

Charlee Roy has been on a mission to reduce the amount of toxins going into Owen Sounders’ bodies now for the past five years, while also offering zero-waste options to her customers. And business is booming. For an idea that started in her basement in 2013, it’s become such a successful business that it’s allowed her to leave her job teaching in the Health-Sciences department at Georgian College.

Her initial store on 3rd Ave E in Owen Sound was quickly outgrown, leading her to a new spot on 2nd Ave E beside Foto Source. And she’s developed a small dedicated team of young professionals – Courtney McCallum, who will be helping launch zero-waste subscription boxes, and Amy Amyot, who makes her own line of bath bombs for sale in the store.

But it was really giving birth to her twins that made her realize how many toxins and chemicals we are constantly putting on our skin.

“Having kids has made me realize what I’m putting on skin is gross. I won’t put carcinogenic fragrances or alcohols on [them] . Even…our clothes are sprayed with chemicals before they’re shipped to our door,” she says from her Apothecary in the back room, a calming, scented place she invites people into to read and de-stress.

The idea of a ‘refillery’  came about just last year in conversation with her team. It’s a very new concept (so new that it’s not technically a word yet), but one that the NakdBasics crew has really gotten behind. They’ve turned Courtney’s refloxology room into the dispensary that will open by the end the February. You can bring your own refillable containers or use theirs, and the program works on a weighing system.

But to be fair, it’s not a completely new concept. For example, Bulk Barn has been allowing customers to bring their own containers to refill food items for some time now. Each week I bring my glass jar and fill it with snacks. It’s easy, cheap, and environmental – the holy trinity of the circular economy.

This is not the case at big supermarkets, though, which is where the plastic revolution really needs to take place, according to Charlee.

She says the last industry to change will be the food industry, where plastic is king due in part to it’s lower shipping costs.  “It’s almost impossible to go to the grocery store and get at least one item that’s not in plastic,” Roy says, and I have to agree. I spent a month eliminating plastic from my life and the trip to the grocery store was always the most difficult. It took a lot more calculation – I dreaded it.

But it ultimately comes down to the consumers. If we demand it, businesses will provide it. It’s pretty simple.  “As consumer’s we can start making better decisions or start making our own products,” says Charlee. That’s something she’s done that ultimately led to her successful business in the first place. She started by making her own skin lotions, and continues making her products in-store in the NakdBasics workshop.

Both Courtney and Amy make products for sale in the store, as well, and NakdBasics has been picked up by the Bluewater School Board for electives.

Her store is also popular for birthday parties where youngsters can spend the afternoon making bath bombs to take home. She’s inspiring a young generation to adopt the mentality that they can make things themselves. They will likely be more mindful of the harmful ingredients in products and push for locally made goods or at least less toxic.

In the end, the barrier to positive environmental change is always convenience and cost. The circular economy solves both of these. New Yorkers and Parisians will soon have a convenient, cheap way to consume Haagen Dasz and Tide detergent, and Owen Sounders will have a cheap, convenient way to consume everything from body lotions to beard oils.

Now that I think of it, my beard is definitely in need of some toxin-free love these days. And if I ever decide to shave it off, then Charlee and her team will happily sell me a reusable razor.

Gillette can spark as much controversy as they want about what makes a real man, but in my opinion, a real man is one who cares about the planet.