Home Culture Allen Smutylo has the heart of a nomad 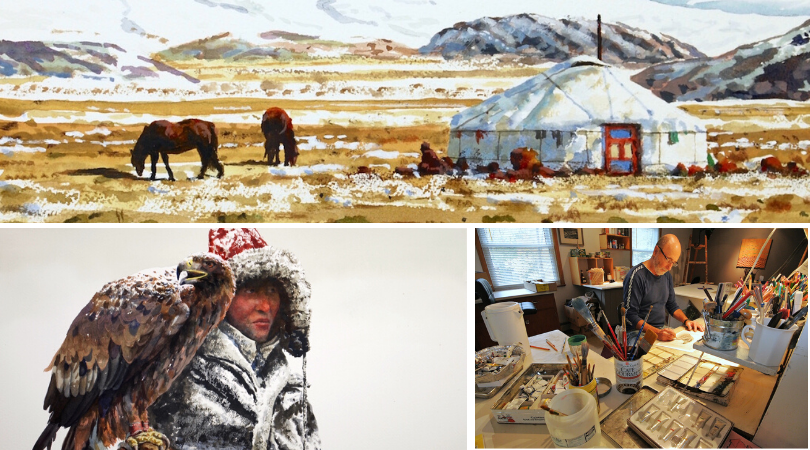 I’m standing face to face with a Mongolian nomad; perched on his arm is a massive Golden Eagle, her eyes fixed on something in the distance. The man’s face is determined and unforgiving – it tells of a place I know little of. The depiction is so real, I’ve been lost in it for the last few minutes, the length of time it’s taken painter Allen Smutylo to get a couple beers from his fridge.

The fact that I’m so moved by this piece proves that Smutylo’s aim for his new collection has been realized.  “What I’m trying to do is give a flavour….a tactile sense of the culture,” he says. The culture he’s speaking of is that of Mongolian nomadic tribes in the land made famous by Genghis Khan. As we converse about his recent time with the Mongolians, he seems to return to that place frequently in his mind.

It’s clear that he keeps a part of it close to his heart, as I imagine he does with each remote place he journeys to. For him, it’s about the wow-factor. And the work that comes out of it, both in writing and in art, is so engaging and immediate, he has been nominated for a Governor Generals Literary Award in Non-fiction and won the Best Adventure/Travel Book Award at the Banff Mountain Book Festival.  He has written about nomads in the Himalayas and about kayaking through icebergs in Greenland, one of the setting of his 2013 book The Memory of Water. For his most recent adventure on the steppes of Mongolia, he says he’s “trying to suggest a scent or a mood, something depicting that culture I thought was so beautiful.”

On the walls of his Big Bay home hang depictions of characters he’s met and landscapes he’s seen; the pieces will all be part of his Art Show at his home and studio this weekend (February 29 and March 1). The world-renowned painter will be selling fifty–years’ worth of artwork from 1 – 4pm each day. And, you’ll likely find copies of his most recent book, The Mongolian Chronicles: Eagles, Demons, and Empires, for sale as well. The sale takes place at 504095 Grey Road #1 in Big Bay, just 200 meters west of the Big Bay General Store.

Visiting the harsh steppes of Mongolia is not on most people’s bucket lists, so I’m curious to know what drives him to visit places that are so inhospitable to Westerners like us.

“Some might call it disturbed,” he jokes. “I like the newness of it. I like to be startled. I can use that internally and build from it.” He doesn’t do much pre-trip reading or research, but trusts his own wow-factor and let’s the creative process start there.

“I was living in a tar paper shack, with no car, a pump to get water, and an outhouse…but i was as happy then as i am now.”

On Mongolia, specifically, he was fascinated by a culture that eschews modern technology for the most part and lives more closely tied to the land. “I tried to portray that culture honestly, but underlying it there’s a positivity for me in seeing that…people interacting sustainably on a planet.”

And what he found was a harsh way of life, detailed quite clearly in his new book, which I haven’t been able to put down these last few days. The work is layered with detailed descriptions of the people and their way of life – nomads on horseback, donned with furs and carrying eagles. He likens it to the scenes from Game of Thrones, but clarifies he has no agenda in his portrayal. “I’m not trying to romanticize it,” he admits.  “It’s a punishing life…but there’s something in their world…that makes sense to me.”

The Eagle, both in its figurative and literal form, is at the forefront of his new collection, one that features ornate background elements, framing, and use of graphic symmetry to showcase scripture, petroglyphs, and cultural fragments. It’s an approach that he didn’t have the confidence to do when he was starting out, he says.

“Even though these are portraitures, I don’t consider them portraits…this is the people of a culture and a time – an existence.  [One] that is not easily opened.”

It’s a departure from a more classic style of portraiture that he built his name on in Tobermory in the early days. The move to Bruce Peninsula came right after his graduation from the Ontario College of Arts in the late sixties – a professor offered to rent his building in the small fishing community as an art gallery, and so Circle Arts was born shortly thereafter. The gallery is still in operation today (and selling Smutylo’s art, of course).

“I was living in a tar paper shack, with no car, a pump to get water, and an outhouse. I hitchhiked into town, but…I was as happy then as I am now,” he says. “For me it worked.”

His following started to grow quickly. People were buying his stuff, which reinforced his decision to move so far from home. It could have been viewed as an odd move by some, but he was part of a generation that was going against the grain in many ways.

“It was a different time then,” he says. “There was a lot of credit given in the late 60s and 70s to people doing that. Not that there isn’t today, but it was different then. To go your own way, not get a job, not work for the man – that had credibility in my age group.“

If you were lucky enough to get a ticket to the Roxy Theatre’s sold-out 9-night run of The Portrait in the Spring of 2015, then you learned all about the Hollywood-style plot that unfolded during his time in The Tub.

“When I was living it, I knew it was a story I wanted to tell,” he says. “It’s a perfect story.”  He even managed to get a film director up there, but alas, no Hollywood filmmaker has yet to take on the project. There’s still a chance it might happen, but there was still a wildly successful local theatre production to tell the tale. “I loved the play. I loved the whole thing. The cast we had was great….all of Tobermory came down.”

That Allen Smutylo can tell a story with both words and images is rare, and he posits they both have their own function, but when juxtaposed, can really move people.

“I like the combination of the two. It’s pretty powerful,” he says. “It’s two ways of telling a story” and there’s a nice tension in the book between the two different media.

It’s clear that Smutylo thinks deeply about the creative process.  We discuss at length the power of art and writing and how each can carry meaning. He likes non-fiction for the fact that it deviates from patterns of archetypal plotlines. He gravitates towards it just as he does being startled by unexpected places. There’s something about the mystery of real places, real people that is far more enticing than fiction for him.

He’s gifted to be able to choose which form to communicate his experiences. He starts in the visual world – “that’s where I’ve made my living,” he says. But if there’s something that’s better communicated with words, he uses those instead. At the end of each adventure, he finds he has enough images and words to fill a book, which results in a textured unfolding of a culture that is visceral and easy to get lost in.

With Mongolia, he knew there was much to draw from visually, both to fill the canvas and the page when he returned home. “It doesn’t work unless this thing is going to communicate to someone else,” he says on the process of creation, a process he is happiest in.

“It’s that inner joy to communicate,” he says. “I need to show people – here’s what I saw, or here’s the idea I had.”

And we’re all richer for the places he’s seen and the ideas he’s had. The most recent have led to his new book The Mongolian Chronicles: A Story of Eagles, Demons, and Empires. It’s his fifty years of brilliant work, though, that have formed a legacy, which will be on display at his home and studio for two days this weekend. It’s one art sale you shouldn’t miss. He travels the world to create lasting images of remote cultures. All you have to do is drive to Big Bay to see them.

The Art Sale takes place this Saturday and Sunday from 1 – 4pm each day. The studio is located at 504095 Grey Road #1 in Big Bay, just 200 meters west of the Big Bay General Store.

Art and photos by Allen Smutylo