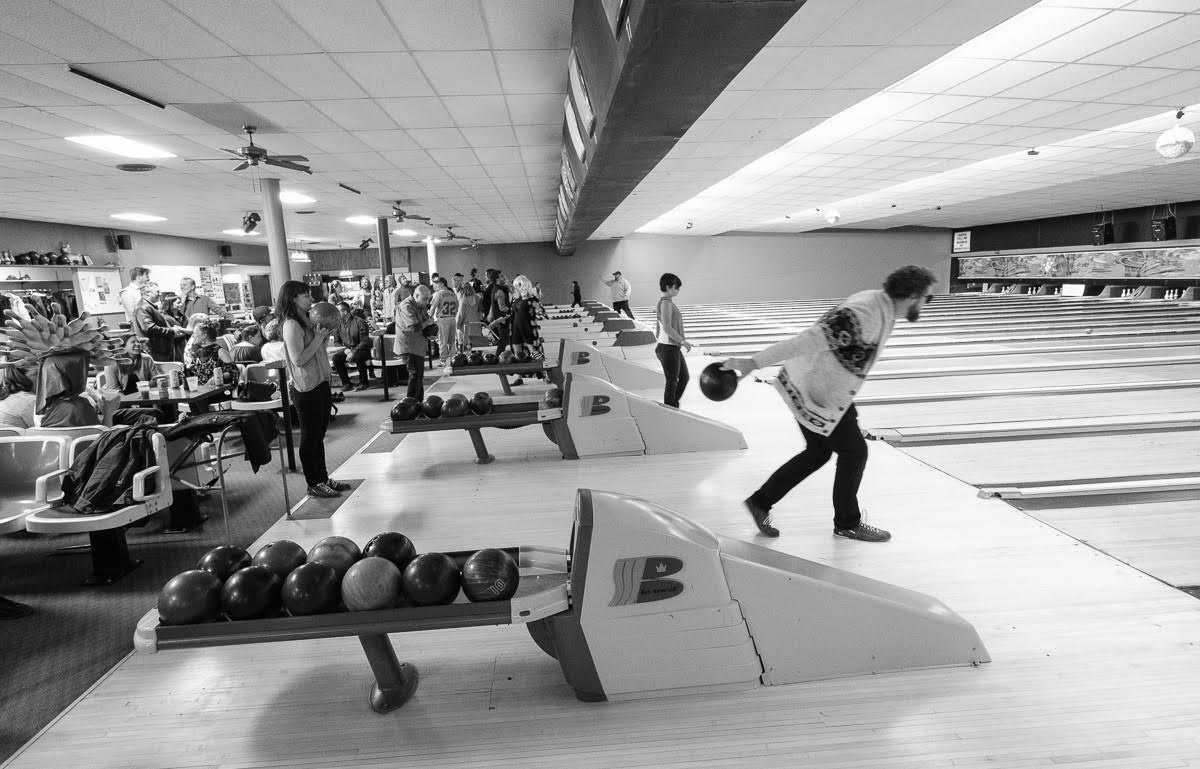 Why do L.A., New York, and Louisville get to have all the fun in celebrating the greatest movie of all time? Why can’t Owen Sound have it’s own Lebowskifest?

Rrampt brought Lebowskifest back to the city of Owen Sound Friday night, which meant sixty Urban Achievers loaded a bus outside of the Heartwood Hall to go roll some rocks – not really an eyebrow raising event with that detail alone, but you add in the fact that everyone was dressed as wacky movie characters from The Big Lebowski, and you’ve got yourself a spectacle. And being that it was on 4/20, there must have been a few bystanders who’d just peaked on an edible gummy bear and didn’t know what the hell was going on downtown.

So, since you’re probably into the whole brevity thing, here’s a quick run down of the night with some pics to let you know just what kind of shenanigans went on on Friday.

In terms of costumes, we had a few Dudes (including myself), a Walter, a Maude, Donny’s ashes in a Folger’s can, Moses and Sandy Kofax (you’re God damn right I’m living in the past!), a bowling pin, some nihilists, a girl with a missing toe, Jackie Treehorn, Saddam Hussein, and many others.

The trivia winners this year were the trio of Pete, Andrew, and Chris who took home Lebowski sketches by artist Paul Smutylo. They even achieved a perfect score, even though they definitely did not bowl a perfect game earlier in the night.

Best costume award went to Bunny Lebowski whose green bikini made quite the splash, although no one went looking for a cash machine! I was told by one Achiever that there’d be a mutiny if he didn’t win. Thankfully, my costume committee felt the same way and handed him a $50 GC from The Bowling Alley.

Runners up for costumes went to Steve and Todd who rocked Moses and Sandy Kofax and were clearly living in the past, but damn proud of the tradition they represented.

Big thanks to Black Bellows Brewing Co. for sponsoring the event, Pick Up Game for playing and learning the soundtrack songs, and also the Bus Stop Cafe for providing the In n Out burgers (those are some tasty burgers, Walter).

While I can’t offer you a taste of Black Bellow’s beer or Bus Stop’s tasty burgers, I can give you a listen to Pick Up Game doing a rendition of my favourite tune from the movie, Man In Me:

And thanks to John Fearnal of Good Noise for providing these fantastic shots of the night!

Well, that just about wraps it up. But then again, I happen to know there’s a little Lebowski on the way.  I guess this whole darn comedy keeps perpetuating itself down through the ages…look at me: I’m rambling again. Until next year, folks.