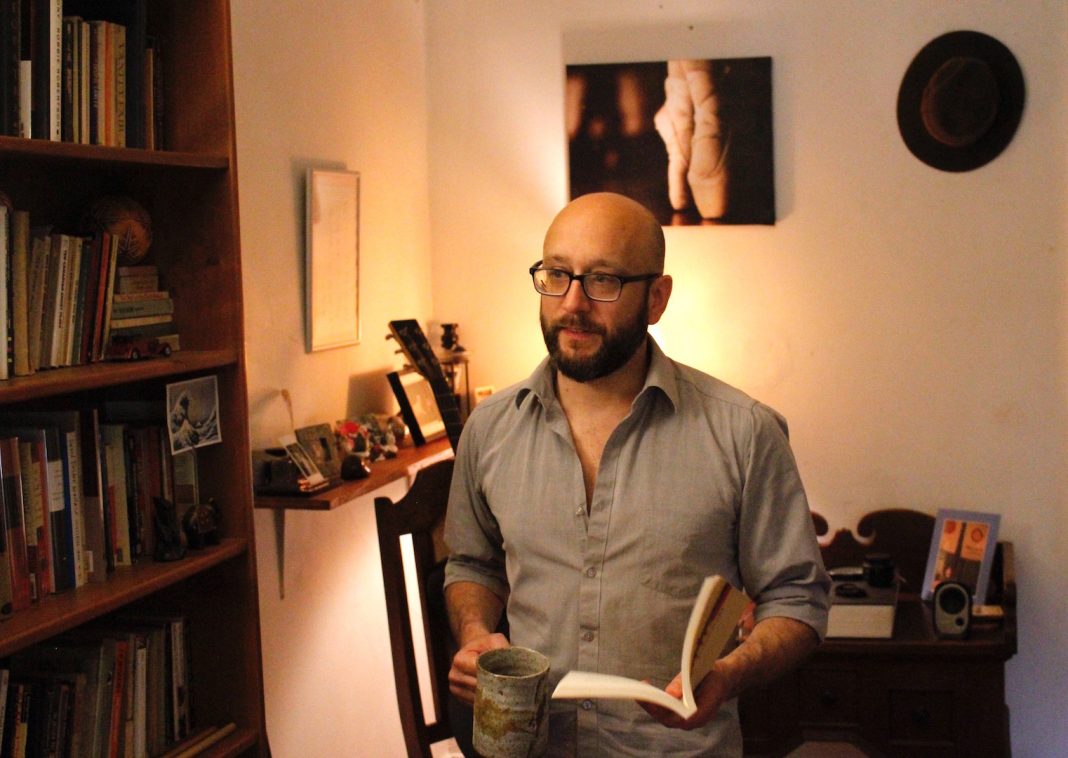 I’ve known Christopher McGruer as a musician, actor, and filmmaker, but as I step into his apartment, I know right away he must be a writer too. I’ve come to recognize the signs.  Besides the intimidating collection of books that include Nabokov and the Journals of Sylvia Plath, there is a typewriter within arm’s reach of the table. “That still works,” he says before he offers me a Heineken. “It just needs a new ribbon.”

It makes sense that he’s got drafts of novels hidden away in drawers somewhere – his song writing is archetypal in nature and his screenplays are rich with literary techniques. When I think about it, he’s got the stamp of a writer all over him.

And not only is his book collection intimidating, but so is his resume. He’s got more artistic endeavour’s under his belt than his typewriter’s got keys.

On this occasion, I’ve been invited over to view his most recent short film Dance For James Dean, a title I’ve heard before, and quickly realize it comes from a song of the same name from his old band, Underground66. The song is influenced by bands like Tool and Rush, which “is what happens when your drummer is a Neil Peart fan,” McGruer jokes. But the figurative elements surrounding iconoclast, James Dean, play a pivotal role in McGruer’s new work.

It’s not so much about the actor, but about what Dean represents. And it’s not even about the dancing, although the main character, played by Jennifer Mackinnon is a professional dancer in the film. No, it’s more about living life with your own authenticity and not being bound by judgement from others and the rules of society. It’s something McGruer can portray on screen because he lives by that ethos himself. He brings a genuine passion to each project he takes on, whether it’s drumming in the band Woodworker, taking a role in community theatre, or writing and directing a film.

He’s spent a lot of time as the front man in projects, and is happy to be stepping back out of the spotlight a little. He’s now a drummer instead of a singer, and he’s a screenwriter/director instead of an actor. He seems content in making this move because it allows him to create projects from inception that he’s wholly passionate about. That’s the key, he says. “Choose a project that you…really feel needs to be made. You have to have that passion. That’s the big one.”

He directed the one act play, According to Valentine, at The Roxy Theatre and then felt passionately enough to write a letter to playwright, Allan Knee, in New York asking permission to turn it into a short film. Knee said yes, and so began McGruer’s foray into filmmaking. Other projects include a full-length screenplay based on the life of Carol Christie, who belonged to the polygamous Mormon cult in Chatsworth.

But while he’s spending more time as a director and screenwriter, it was his time in theatre that’s shaped his approach to filmmaking.  “The whole team…worked countless hours to put on productions, and the model for how that works…I took a lot of that for how I do films,” he says.

“Film is a team sport,” he clarifies. “It’s so opposite to what a writer is doing and I don’t know which one is harder.”

Originally, Dance For James Dean was meant to be a music video for the song it takes its name from as a tribute to former bandmate, Shay Morris, who passed away in 2017. Morris was the one that helped conceive of the idea. But when McGruer saw the footage, especially the performance by Jennifer, he realized he’d actually shot a short film and not a narrative music video.

The film takes the archetypal elements of the song and forms a wider narrative – one that follows a young woman as she battles with her identity after a devastating injury. The role is played by the talented Jennifer Mackinnon, who met McGruer on set of Macbeth, and the father role in the short is played by Ben Davidson, who says little, but speaks volumes.

The movie is shot in Owen Sound at locations like the Bus Stop Café, the Owen Sound Dance Academy, and one of the More Estates, and offers beautiful contrasts between the main character’s struggles and her moments of flourish. The sequencing of shots and cryptic dialogue allows, actually demands, for multiple viewings.

If you’re on the film festival circuit this coming season, you just may see it. McGruer’s in the process of submitting now. But he’s not gauging its success on acceptance into festivals. He’s been in the arts long enough to know that objective metrics are not what dictates triumph. “Me being able to work with people at the top of their game and engage with them to create something is the success,” he says.

He’s lucky that this area offers so many talented people for him to engage with. It makes local filmmaking possible. Not only did he find a seriously talented actor in Mackinnon, but he’ll be the first to point out that “there’s a really interesting artistic community here…that goes for writers, for filmmakers, for musicians,” he says. His job as a filmmaker is keeping all these talented people engaged for a long period of time while the film is in production, but it’s a task he’s up for and one he’s good at.

Find out just how good he is on August 15 when he’ll provide an early viewing of the film with an artist talk at the Owen Sound Library. It’s an event he’ll once again have to take the spotlight for, something he thought he’d given up, but I have a feeling he’s just fine playing the ‘front man’ on this one. After all, it is a huge accomplishment to complete a film.

And it’ll offer a chance to ask him about the feature length Dance For James Dean that’s scheduled to begin in 2020, or about one of his countless other artistic projects.

There is no shortage of questions for a person with this many talents and this much passion for the arts.