I find I get stuck listening to the same genres too often.

I gravitate towards folk, alt-country and indie (whatever indie even means). So when a band comes along and breaks me out of that habit, I get excited.

WYVZ is one of those bands. Simply put, I need to listen to more electronic music. I mean, I groove to M83 lots, and some Major Lazer. But I’m now adding WYVZ to the mix. Their new album, Triangle, is ready to drop soon, and we got our hands on an advanced copy, and a heads up on the first single dropping today.

What’s cool about WYVZ is that it’s a collaboration between artists across Ontario and Quebec. The project is orchestrated by Georgia MacEwen Hall, who is  a Canadian producer drawing comparisons to Flume and Aphex Twin.

MacEwen has assembled a talented group for this debut, including Owen Sound musician Devon Travis, one half of local band Dead Winter, and creator of Lamebird Records. His contribution is a standout on the album. But don’t take my word for it; if you’re listening to the video I posted above featuring his lyrics over MacEwen’s music, you’ll recognize the talent that’s been married here.

Travis’ meaning, found is a ponderance on searching for truth in one’s life. When he suggests “If it’s love you’re afraid of losing it’s not worth keeping” it provokes reflection. He later offers up powerful gems like “You’ve been pulling on plants to help them grow” to suggest, possibly that we need to cultivate more patience. You’ll have to be patient to get your hands on this album, too, as it doesn’t officially drop until April 27. Unless you’re sitting passenger seat in my car before then, ’cause most days it keeps me company on the road. This is driving music for sure. 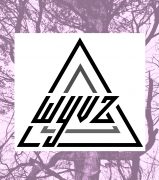 While MacEwen has written and produced all the instrumentals, it’s her “myriad of strangers” as she refers to them who bring their own creative influences to each song. For example, Noah23 brings horns in to augment his track found, and Peter Jarecki kills it on his experimental track ∆, crooning “They sound so stupid now/ But I guess that’s life” Later, MCA comes out spittin’ rhymes on found, meaning and saves the track from a difficult tempo. It really shows us that WYVZ is all about experimenting and it’s exciting to see where things go on Triangle.

The album kicks off with some pure electronic on the first few tracks, and when Travis’ vocals enter, the pop balances things out. The album plays on the words meaning and found, using variations throughout. Travis sings shoe-gazingly (ya, that’s a word) “If your life is meaning nothing, don’t teach us that” and “When it comes to being lost, you’re good at finding”

The result is a unique and creative sound that mixes heavy bass with pop, electronic, and hip hop; overall, it’s a really strong debut for WYVZ and sure to gain them a solid following. They’ve married the right people for a successful and perhaps long relationship. 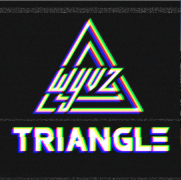 You can find WYVZ at the following places: