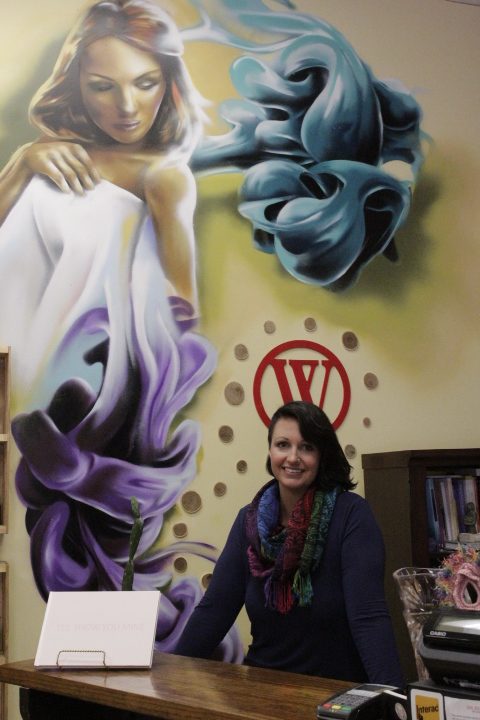 “If I’m going to be the vagina lady in this town, I want to rock it,” Sarah Fowler says as we sit in the back of Her Wellness, a downtown health and sexuality business she’s owned and operated since 2015. I’m drinking water from one of her Wonder Woman glasses as she tells me about her philosophy on health, sexuality, entrepreneurship, community, and the giant wooden vulva in her front window. It is the cause of many curious patrons, and the odd angry one. “For every 9 people who love the vulva, there’s 1 who comes in and complains,” she says.

But that 1 out of 10 just offers Fowler an opportunity to discuss her belief that sexuality is healthy, and it’s important to build a strong connection to one’s body. “We need to normalize this because when nobody talks about this then nobody learns,” she says.

And that’s the focus of our conversation: her philosophy on sexuality, which is very intriguing. I’m not a woman, and therefore cannot relate directly to some of the examples she gives me, but I believe that her message is an important one. She wants women to know that their health and sexuality are strongly connected. And I feel this is true for all genders. It’s not necessarily about fun and games, she says; it’s about education and being safe to explore one’s body.

“90% of my job is education…I really need women to know that they have a safe place they can come, they can ask questions, they can get help, they can confide in me, and if I don’t know the answer I will find [it] out,” she says. And many already do ask her questions, she says. “Woman come in and share more with me than they do with their own mothers.”

When I think about sex education, I think about two people: my high school gym teacher, and Sue the Sex Lady. Well, Sarah Fowler is neither of these, thank God. I don’t know which was more awkward in my youth – watching Sue slide a condom over her seventy-five year old fingers, or hearing my middle-aged gym teacher saying the words nongonococcal urethritis while reluctantly pointing to pictures of male and female genitals.

Sarah’s a young, hip, open-minded woman whose message is very approachable: it’s healthy to learn about how your body works. And she’s more concerned about younger women who seem to be much more timid when they come into her store. “It’s the 20 year olds who are super squeamish and shy; they’re worried about their external as opposed to their internal,” she says.

‘Do they feel like they’re not allowed to talk about it?  ‘ I ask, trying to get to the root of the problem without asking questions that will move me out of my comfort zone. This interview was educational for me, and more of a listening opportunity. I was careful where I put my two-cents in. And the whole issue of discomfort is something that Fowler knows exists. In fact, she is having a frosted sticker placed over the front door as we speak in order to give women more privacy while they shop.

She wants people to feel comfortable coming in and buying her products. There are a certain demographic that already do, she says. “Anyone who is in the mid to late thirties blow right by me and know exactly what they want.”  But it’s the ones who may just peer in the window, curious, that she wants to come into her store and chat with her. She wants to tell them: “You own it.” It’s a great message for anyone to hear. ‘Own your body; own your sexuality; own your life.’

“If they don’t know how [their body] works, how can they expect their partner to know?” she says. Good point. This is where I don’t comment because I will run the risk of discussing what I know and don’t know about my previous girlfriends’ bodies, and I’m not ready to go there yet. But luckily, Sarah is willing to go there..and beyond.

Overall, Fowler is bringing health and sexuality to Second Ave. and people are loving it. She gets excited when she hears people tell her they used to travel to Toronto but now they can shop with her instead. And she’s been hosting some really cool events outside of sexuality-based that are much needed in the area like Ladies’ Nights and Art Nights.

Her Wellness isn’t just a store – it has fantastic studio space to rent out. It’s tucked in behind the store and is open to yoga instructors, and anyone wanting to run a workshop.  The exposed brick and hardwood floors offer a really calming atmosphere.

I’m realizing, as I sit here drinking water from my Wonder Woman glass, talking about women’s sexuality, that I could have asked one of my female freelancers to write this article. But I realize that kind of thinking is what Sarah is against – she wants us all to be more open – including men. And there is much to learn – I’m realizing how little I know, even about Sarah herself. I didn’t know she was born in Owen Sound, and that Harry Lumley is her great uncle; that she spent 11 years in the military as a medic before going away to school to become a doula, which I learned is a professional birth coach. But she’s excited to be living back in Owen Sound and running a business for something she’s passionate about.

“I have lived six years [in Owen Sound] and I feel more community here than anywhere in my entire life. And I was like 20 years in Cambridge, and I was 8 years in Pettawawa, and that was military, you don’t get more family than that.”

She explains that she can go anywhere around town, and they know what kind of coffee she drinks. It’s little things like that that make this area home for her. I know exactly what she means when she says “the community collaboration [here] is huge.” She belongs to the group of businesses on 2nd Avenue in Owen Sound, which is quickly becoming a hot-spot for not only food, music, and shopping but partnerships as well. “My favourite thing is to collaborate with other businesses,” she says. “I feel like I’ve connected even more as an entrepreneur.”

And she’ll be the first to point out that shopping downtown supports not only businesses like hers but also her family. It helps pay for things in the community like her son’s hockey. It’s money that stays in the area and helps it grow.

“We’re growing this community where people are looking for more…We need even more.”  I agree with her and tell her we need more people like her downtown running cool, unique enterprises. “If there isn’t a niche, create it,” she says. True words of an entrepreneur.

We’re just about to wrap up our discussion when Rick from Bayshore Broadcasting walks into the back and asks Sarah to voice another lingerie ad for a Kincardine business. It turns out she did such a great job on the last radio spot, that they want her to continue.

I don’t think she’s in any danger of that I assure her. She’s doing quite well downtown these days. In fact, she’s just hired two new people and she’s in the midst of bringing more products to the shop. And frankly, based on the amount of workshops, classes, and events she’s got coming up, I don’t think she’s got the time. But she’ll always have time to talk to her customers about their health, and of course that conversation’s going to involve their sexuality.

So go in and share with her; talk about your health, your sexuality, and maybe walk out with a sex swing.

You can keep up to date with Her Wellness at the facebook page and by popping in to say hi (of course).

Photos by Jesse Wilkinson and Her Wellness