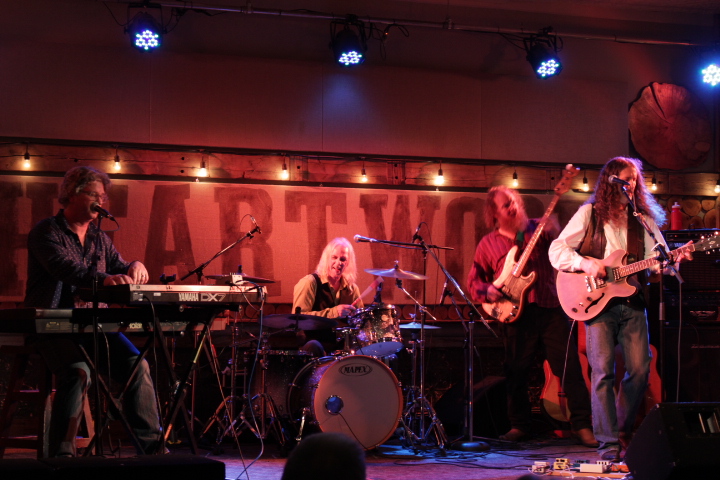 “So much of this is about the storytelling” Al Parrish says as he explains to me the history of his band, and the new music they’re preparing to unveil at the sold-out Heartwood show.

Parrish is the ‘P’ in RPR; the two R’s are Steve and Rob Ritchie, and all three are from the band Tanglefoot. And then there’s the addition of Beaker Granger, percussionist, songwriter and sometimes lead vocalist who seems to fit right into the dynamic like he’s been playing with those three for the last thirty years too. The band credits Beaker with the formation of RPR after they met at a Dylan tribute night where Granger was playing with the house band and Steve delivered a killer version of One More Cup of Coffee. 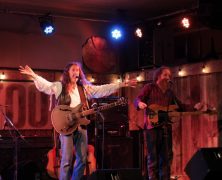 There are a few things I took away from last night’s show: these guys are definitely storytellers like Al posited, these guys are also really funny, and lastly, these guys are not just “Tanglefoot Light.” Sure they realize some people are coming to the shows to hear a few tunes from that iconic, award winning band, and sure they always play a few, but the night consisted largely of RPR tunes from Trans Atlantic and the upcoming album.

They used to play 150 shows a year, so to do only a handful, Steve says, adds a little more gravity. “The less you play, the more important each show becomes,” he says. “Now doing just one show on home turf is a lot of pressure.” They wanted to make sure the audience went away telling their friends they missed one hell of a show – so, I’m here to tell you, if you weren’t there last night, you missed one hell of a show.

They kicked the night off with a new one called Great Big Love, a funky song with a strong bass line and an important message: there’s too much fear right now and not enough love. A timely tune. Another new one called Shopkeeper was unveiled later in the set. It was written by Rob and Beaker in the rolling hills of Yorkshire Dales in England and details the relationship between a home-body shopkeeper and a traveler with “eyes always on the next bend” and the “vagabond love” that develops between them. I found out last night that Rob is also a novelist, and his attention to detail in his songs is indicative of the craft. 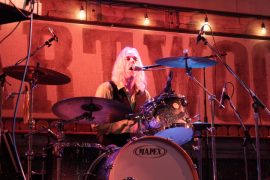 When they launched into When the Spirit Moves, the crowd was warmed up and ready for what was easily both a crowd and a band favourite. This upbeat rocker has a clear message, and one that ties into their description of themselves. They say their music is ‘light and shade’ and this one supports the ‘light’ element. It asks its listeners to “dance right through this storm” and claims “when the spirit calls, there is this dancing light”. Not only does it offer an uplifting message to look beyond the darkness, it also allows the band to really let loose on stage in what they refer to as the ‘rampantly energetic’ element to their music.

The theme of the storm reappears later in their fifth tune, Temporary Song, about Hurricane Katrina, for which Rob gives a great detailed introduction to. This band does not just tell stories in their songs, they tell stories about the stories in their songs, which for attentive fans is a great payoff. Parrish says that “The people who come to our shows tend to be good listeners…they’re interested in the stories.” So when the bar crowd was getting a little too noisy in the back of the room, Rob gave them a seasoned ‘Hey!’ into the microphone and reminded them why the majority of fans were there: to hear the stories, both within the songs and before them. And then he continued to explain the story of Temporary Song, which ends with him in a Tim Hortons bathroom, as he finished writing the song hours before he was to perform it. 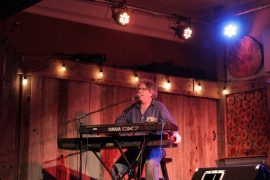 This is where Rob is at his finest as a songwriter with clear command of imagery in lines like “There’s a man in a stolen car/ he’s picking up the dead/ there’s a child out on the overpass/ she’s crying to be fed” and strong currency of language in the chorus “hold back water/hold back tears/hold back chaos/hold back fear”. The band keeps the pace of the tune as it builds and falls – Al rocks a sweet bass line and Steve riffs behind him as Beaker emphasizes the build that leads to the final chorus as climax.

They blend the serious subject matter of their songs with lighthearted stage banter, joking that Al is really the counsellor of the band, Rob is the third of two sons, and that Al wrote a whole song as a dare that he couldn’t fit ‘calcium chloride’ into the lyrics. Crop duster is an ode to small town life, and one of the lighter songs in their repertoire. As is another of Al’s songs, Mister I Am, which came to him at the request of his wife, who told him while he was sleeping that he should write a country song. He woke up and wrote one about the gender roles in courtship with a fun twist at the end using clever wordplay.

This was my first RPR show, and I marvelled at the talent and versatility on stage. Steve and Al exchanged their instruments like golfers exchange golf clubs, and so it shouldn’t have come as a surprise to see Beaker step out from the drum set, pick up a guitar and take to the mic. Steve jumped behind the drums in his place and supported Beaker’s powerful I’ll Be Home, a song he dedicates to the local musicians we’ve lost in the past year, musicians like Jake Chegahno. 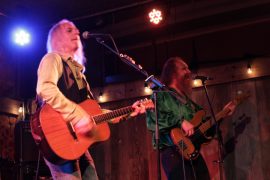 The second half of the night brought more well-crafted tales set to music, and more witty introductions that demonstrated how much these guys love being on stage. It’s part of the reason they formed RPR – Parrish said they were getting requests to do small shows after Tanglefoot retired in 2009 and they noticed how much they missed entertaining people. They each contribute to the songwriting and also to the entertainment. Rob’s introduction to One Fine Day got the crowd laughing – I’ve never heard of the term ‘wood-shock’ but I encourage you to look it up.

Near to the end, Steve declared that he is the ‘body-count’ writer of the group. He seems to always kill people in his songs, but when he played A Long Conversation, he explained the true story of the poet and painter, who became soul-mates and the heartbreak that resulted in death. There was only one death, though, that actually happens in the song, he said, and by the time it was over, everyone in the crowd was in the palm of his hand. He revealed himself as a master storyteller here. 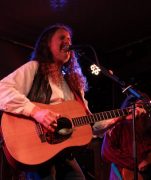 They returned to the metaphor of the storm with Fall Down as the Rain and Parrish sings “If I get to heaven/ I will not stay/ I’ll turn myself around again/ And fall down as the rain” in a hand-clapping a cappella ditty.

When the band got called back out to a standing ovation, Parrish analogized it to someone working a minimum-wage job and being told that they did such great work, that now they’ve got to work a little more. The crowd laughed and settled in to hear them do just that. But we all knew Parrish was joking because it’s clear how much fun these guys were having. It’s definitely work, but work they seem to love. They closed out with Hard Road and McCurdy’s Boy. 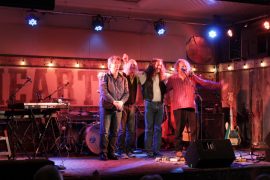 And that’s where the story of RPR at the Heartwood Hall ends. Everyone packed up and went home, CD in hand, with stories of their own to tell their friends over Saturday morning coffee.

And since every good story has a message, what I took away from this one was that when you are passionate about what you do, people are going to respond. RPR has a passion for telling stories – pay attention and you’ll get some great ones in their songs. But to get the stories about the songs; to get the jokes, the energy, the wit, you have to go see them live. So the moral of the story, I guess, is to go see more live music. Go see RPR the next chance you get.