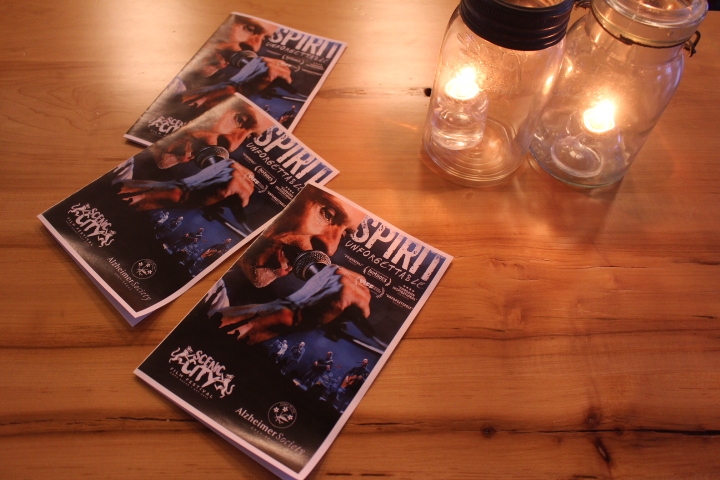 I’ve been to two Scenic City Film Festival (SCFF) events and both times I’ve walked away thinking ‘This is important.’ What they are doing is bringing stories to our community, stories that make us laugh, fume, and cry. Stories that make us connect.

Film is such a powerful medium, and the one that SCFF brought this past weekend (Thursday counts as the weekend right?) was just that.  It revealed the reality of Alzheimer’s. It gave the disease a face. John Mann’s face, but also the face of his wife, daughter and bandmates. It humanized the disease and helped to understand it. Hence, the importance. Until something is humanized for us (humans), it tends to be unreal.

And people came out for this event, which isn’t surprising to us here at Rrampt. We know that people love music in this area, and they love film. And SCFF brought that together in another successful event.

“The film was received very well. OS is a wildly musical city, so having the opportunity present itself to not only engage the topic of Alzheimer’s Disease, but also integrate an iconic Canadian soundtrack into the mix was really something special” says Nelson Phillips of SCFF.

The soundtrack now includes Larry Jenson’s ode to his father, which helped to humanize Alzheimer’s as well. He enlisted the help of the gifted Keira MacArthur to lead into the film and Sandra Hong clarified some of the misconceptions of Alzheimer’s to close out the event. And there was plenty of cheese in between. I don’t mean on screen. I mean cheese that you can eat – a lot of it. Donated generously by Milk Maid. It was a gathering place for people to meet and chat. I had some great conversations about the film while stuffing my face full of camembert. But isn’t that why we were all gathered together?  To connect; to talk.

I was inspired by the partnership between the SCFF and the Alzheimer Society of Grey-Bruce. Rrampt was excited to be a part of this event since part of our goal is to donate to the Canadian Mental Health Association when we can (our merchandise sale profits go to the CMHA). These partnerships are valuable.

“The Alzheimer Society of Grey-Bruce was phenomenal to work with because they really allowed this screening to go beyond the types of fundraisers they’ve been used to hosting in the past. To us, that demonstrates real trust, and that’s the type of stuff that goes a long way in a small town” says Phillips.

I’ve confessed I didn’t go see this film because I was a huge Spirit of the West fan; I went because stories like this are important and because it was a great celebration of community and culture. 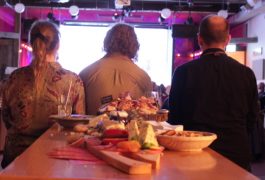 The story, just as I anticipated, was an emotional one. John Mann had an energy to him, especially on stage, so it was painful to watch him realize his dynamism was fading. The Alzheimer’s slowly stole his energy, leaving him ultimately standing still at his shows with lowered head to read lyrics on an iPad.

The community really came out for this event both in attendance and in sponsorship. The Milk Maid, Goliger’s Travel Plus, The Little Foundation all stepped up to help and, in an unexpected turn of events, an anonymous donor came forward and ensured a healthy contribution to the Alzheimer’s chapter.

Rrampt says: keep facilitating these events that allow the community to come out and get cultural; talk about important issues; and eat great cheese. It’s important (the culture and the issues, not as much the cheese, but damn was it good).