It has been one year now since the first Rrampt piece was posted, and a lot has changed.  We’ve gone through some ups and downs, strikes and gutters, a new website, a Facebook page and some new contributors.  It’s been a great year, and looking forward to many more.

Around this time last year, I remember struggling with what to write for the inaugural post, but after returning from a weekend along Georgian Bay, I realized I had to rave about all that Grey, Bruce, Simcoe has to offer. Well, one year later, it’s only fitting that I take a weekend getaway across these three gorgeous regions again and write about it.

This post is going to be a little different than the one a year ago, though.  It’s disguised as something else, something much, much more important than me, or my weekend getaway.  Sure, I discovered such wonders as the Kimberly Trail, Epping Lookout Point, and the sunset from the Hidden Beaches, but it was the driving between these places that had just as big an impact on my constitution.

So, I packed my sleeping bag, guitar and mountain bike and hit the open road with no plan and no destination. It was exactly what a guy who needs to clear his head must do….go West young man (well, technically, I went East, but are we gonna split hairs here?). I won’t go into details about all the places I went and people I met – no, those experiences will make their way into a short story at some point. I did get some great biking, hiking, swimming and driving done though. Because it’s relevant (eerily, actually), I will say that my first stop was Eugenia Falls and my last stop before returning home was Walter’s Falls – both waterfalls (thanks Captain Obvious).

So, with a long drive comes two things: thinking and listening to music. While I won’t go into all the strands that went through ol’ duder’s head on this trip, I will steer this post towards the real reason I’m writing it; I’ll unmask the true identity of this ramble: a review of the new My Morning Jacket album, The Waterfall. 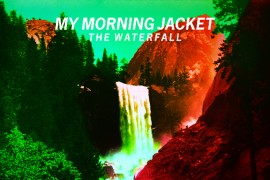 I finally got a chance to sit and listen to this album a few times front to back with full attention….I mean, I was paying attention to the road and everything, but my ears were all about MMJ.

There are two long haired, bearded philosophical guys that have had a big influence on me in my life (No, I’m not talking about JC here). I’m talking about the Dude and Jim James. The Dude has had many intellectual papers written about his philosophy and the philosophies of his fellow characters, but I’m not sure if there have been any university papers written about Jim James of My Morning Jacket (there should be). He definitely waxes some metaphysical stuff on this new album. The title itself is meant to serve as a symbol for life – something that needs to be overcome, something always moving, something beautiful, but dangerous: the waterfall.   You can’t stop your life from moving, you just can’t, so it rolls along and you are left to navigate the contours of rock and cliffs that lay ahead.

James’ penchant for this type of philosophical brooding is not new, but it has definitely been more noticeable since his solo album, Regions of Light and Sound of God, a reference to Lynd Ward’s 1929 novel God’s Man about a Faustian bargain with death. On this new album, Waterfall, the oft cape wearing frontman is asking questions such as: do memories stick around after we die? Does a god exist? Are humans innately good or bad?

This is heavy stuff, but you have to listen closely to hear these, as you can groove to the music and forget about the soulful journey the singer is on.  That’s what’s so great about this band.

He doesn’t have many answers for us, but that’s why this is such a great driving album. It takes your mind to really cool places to wander and think. His voice hovers and floats high above the steady sun-drenched guitar grooves that makes the music so exhilarating. You can get lost in his voice while driving and forget where you are.

To make it clear, I really like this album. And I like it more every time I listen to it. I don’t think it will have the staying power of At Dawn,  Z, or It Still Moves but I’m going to enjoy listening to this album all summer and beyond.

What’s most exciting is that I think these songs will lend themselves to a fantastic live experience. When I listen to a new MMJ album, I try to picture myself in a large crowd of sweaty trance-like music fans waving their hands, fixated on the stage as the night descends on a warm cool evening and James is moving up and down the stage pouring his soul out behind a driving band jamming in relentless harmony (too much?). 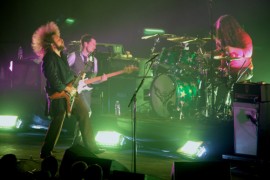 They are playing on June 7 at the Field Trip Festival, and there is no other place I’d rather be that night to hear a set list full of new songs that tell of recovery, introspection, break-ups and re-birth.

This album is anti-love letter to James’ ex girlfriend, so it does kind of serve as a breakup album, but from the point of view of the one breaking up. It is difficult to take solace in this album if you have just had your ass dumped, but even if you have, there is still lots of insight to take away from it because it’s also about James healing physically after a tragic accident, and anyone who’s had their heart broken, will tell you the pain feels physical as much as emotional.

The album is full of symbolism and extended metaphors– water, spring, mending bones, and invisible borders. But interspersed between these symbolic tunes are some direct, to the point songs aimed at his past lover. He is not shy to tell her she needs to ‘get the point/their love is gone’ or tell her he ‘can’t go on faking it tonight’.

The first song, Believe (Nobody Knows) builds up the anticipation for the rest of the album as the chorus repeats the title multiple times in rising octaves. But when he suggests believing and then follows each time with “nobody knows” he is, essentially, asking us to take on Pascal’s Wager, which is a whole philosophical question on it’s own. James has never been clear about his spiritual beliefs, and it seems he is always struggling with who our creator is, but I think he wants to believe in some kind of benevolent maker.

The album finishes on a song called ‘Only Memories Remain’, which explores the notion that abstract things like memories and love will exist far beyond our physical bodies. This raises the question of reality and whether things only exist in our minds or if they take on energy themselves and are the real essence of our existence.

This is some heavy stuff to ponder, and in between song one and song ten are melodies about seasons changing and water flowing– both of which are serving as symbols for what the lead singer Jim James has been going through leading up to recording this album: a fall off a stage, rehabilitation, a breakup.

Compound Fracture gets the album off to a steady pace with a pounding kick drum and sweet, synthesizer chords in a sound that is an echo of the last album, Circuital.  Like a River takes on a Fleet Foxes sound that conjures up a pastoral image of water running, but this is a picture of a river in the autumn, when the leaves have fallen and days are getting shorter. The mood is somber and it is a surprise for an MMJ album – it seems to be a remnant sound of James’ solo album that has crept onto the album.  This seems to symbolize a darker time in James’ recent past, possibly right after his accident.

In Its Infancy (The Waterfall) starts with the same snare drum sound as fan favourite, One Big Holiday, but goes in completely different direction, stopping and starting and calling out the power of the mind to overcome the most impossible obstacles – stopping water from flowing.  There is nothing of the old reverb-soaked sound here that MMJ used to love, instead the evolution from Circuital and parts of Evil Urges are clear. The only song that could have appeared on At Dawn, Z, or It Still Moves would be Thin Line.

Big Decisions would be the ultimate radio song on the album if there was one, but this is something that has eluded the band their entire career. I don’t know why the radio doesn’t like them, but I’m glad, selfishly, since I can still get tickets easily and cheaply to see them every time they come to Toronto.  Spring (Among the Living) is most likely about James overcoming his accident, but it is applicable to any tragic event one must get over, including a breakup, and rejoicing in that feeling of taking part in life, instead of watching it from a hospital bed with a broken leg or your living room with a broken heart.

Tropics (Erase Traces) is going to be one kick-ass tune to listen to live, especially up close to the stage – it has the kind of energy that anyone who’s a live fan will appreciate. Hairs are raising just thinking about the show this June.

So, happy one year anniversary to Rrampt!

The road trip was appropriate (actually necessary) but this album is the real birthday gift to the music lovers here at Rrampt.

I may have seen a few waterfalls on my journey, but there’s still one Waterfall left to see – June 7 in Toronto.  Maybe there’ll even be a small waterfall trickling down my face if they play one of my fav tunes, The Bear; a song that I have not never heard live.  But hey, it’s our birthday and we’ll cry if we want to.