To my mind there’s little debate to be had: Xavier Dolan is not only Canada’s most exciting filmmaker, but he’s among the most vital young filmmakers in the world.  Period.

To be fair, my first encounter with Dolan’s work – the sprawling Laurence Anyways – had me spewing rants rather than raves, with its undeniable flashes of brilliance maddeningly suffocated by what an otherwise unfocused and overwrought mess.  Still, I couldn’t deny those glimmers of brilliance – with one particularly intoxicating sequence refusing to leave my subconscious for weeks afterward – and thus ultimately returned to see what else the young filmmaker had to offer.  And sure enough, with each of his remaining films – I Killed My Mother, Heartbeats, Tom At The Farm – it was clear that I was watching the development of an utterly unique and visionary cinematic voice.

Now, with Mommy – his fifth feature – Dolan has delivered his most fully realized vision yet.  Revisiting the familial themes of his debut, I Killed My Mother, here Dolan presents the relationship between a troubled and volatile teenager, his hanging-on-by-a-thread single mother, and a mysterious neighbour possessing the ability to infuse their lives with a little sanity, while absorbing some much needed spontaneity from theirs.  While the set-up may appear somewhat generic, it comes nowhere near hinting at the exuberance of Dolan’s cinematic vision, which feels liable to rupture and burst through the frame at any given moment (which in one exhilarating moment of movie-magic, it quite literally does).  It’s a film overflowing with the vibrancy and passion of life itself, with all its humour and its heartbreak wonderfully intact. 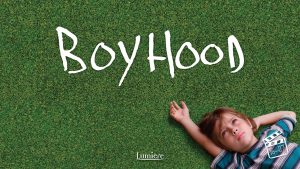 By now, if you haven’t seen it, you’ve likely heard the premise (and if by some miracle you haven’t heard the premise, please stop reading this and watch this movie now).  Boyhood chronicles 12 years in the life of a boy and his family from the early 2000s to present.. the hook being that the film was actually shot over a 12 year period and utilized the same actors as they aged along with their characters.  This alone warrants a level of curiosity, but if the film itself had nothing further to offer beyond its ambitious scope and construction, it would amount to little more than a gimmick.  Yet with Richard Linklater (Dazed and Confused, Waking Life, The Before Trilogy) at the helm, the cumulative experience of Boyhood is one unlike anything that’s come before it.

While the story itself is both relatively simple and free of the sensational elements that typically string viewers along, what we are given is the evolving tapestry of America during the Bush and Obama years — the politics, the culture, the social climate — used as the fabric upon which the transformative years of the boy, Mason, unfold before our eyes.  Yet, on a macro level, Boyhood is ultimately a film that explores our relationship with time.  How it changes us; our attitudes, our values, our relationships.  How quickly it passes.  How we respond to its passing.  How, on our transformative journey towards adulthood, it shapes us into the people we eventually become.

But, perhaps most disarmingly, by allowing us to take this journey with the same group of actors, their characters aging and transforming before our eyes, as we near the film’s conclusion and experience a rite of passage celebration along with this family, and as they themselves reflect upon the past 12 years, we realize that we have taken this journey along with them, have experienced their highs and lows, understand them as human beings, and are filled with tremendous empathy for all they’ve experienced along the way.

If, as Roger Ebert argued, at their best, movies function as machines capable of generating empathy in their audience, there may have been no greater example in 2014 of what movies can offer us than Boyhood.

It’s rare, but every once in a while, the Academy Awards ignores the Oscar bait and finds it in themselves to award their highest honour to something truly deserving.  Something original, daring, and subversive.  Something with the potency to get an audience high off what only the cinematic experience can offer.   But truthfully, I’m still in a state of disbelief that they had the guts to award something as audacious as Birdman.  That alone is something worth celebrating.

I know the film has had its share of dissenting voices, insisting how pretentious it is.  That it relies upon a visual gimmick that pays diminishing returns.  That it’s too stylized and self-aware for its own good.  That it never lets its guard down long enough for its audience to lose itself within the movie.  That’s all fine – but I still call bullshit on all of it.

For my money, there wasn’t a single film in 2014 that elated me higher than Birdman, and often for the very same reasons it has turned others off.  Yes, the Director wants to impress us with his talent, his showmanship, with the risks he is willing to take.  And it’s precisely this willingness to throw away the rule book, to pull no punches, to put on a wild show and impress us with something spectacular, that makes Birdman a high wire act that doesn’t stop paying off.

It seems a fair assessment to say that Paul Thomas Anderson has spent a considerable amount of the last decade thinking deeply about the American Dream.  What it was meant to represent.  Where it all went wrong.  How we got to where we are today.

With each of his last three features – There Will Be Blood, The Master, and now with Inherent Vice – he has taken his characteristically personal stories of fathers and sons and set them atop increasingly challenging examinations of his nation’s dreams and nightmares.  Its fears and desires.  Its obsessions.  And along with this subtextual progression, he has also begun to steer his cinematic aesthetics away from the colourfully energized jolts of Scorsese and Altman of his early career, towards a far more challenging, more allegorically inclined voice that seems more aligned with perhaps the epitome of the American auteur: Stanley Kubrick.  Depending on your personal taste, this is either a very good or a very bad thing, but regardless of where you land, Anderson certainly isn’t repeating himself, and he seems driven to push his art into new realms of cinematic expression altogether.

For me personally, he’ll be hard pressed to ever top Boogie Nights (as will anyone else, to be fair), but that’s likely the very reason why, of his recent work, Inherent Vice currently stands as my favourite.

It could be the film’s off-the-wall zaniness that has Anderson at his most unhinged and comedically inspired since Boogie Nights, giving us a stoner-comedy destined to find its place in the cult cannon rightfully alongside The Big Lebowski.  It could also be that he has chosen a story – based on Thomas Pynchon’s novel – that allowed him to explore and dissect the Sunshine Noir era of the 70s that gave us some of the best American movies… well, ever (the major reference points here:  Chinatown, The Long Goodbye, and Night Moves) — films which repurposed the classic 40s film noir archetypes for a modern world that was far more sinister and corrupt the deeper they dug.  Or, it could be that he’s chosen such a fascinating and tumultuous era of American History – the story taking place in 1970 at the fictional beach town of Gordita Beach, California, in the dying days of the 60s counter culture – the summer of love only a few years past yet already a distant memory, the uneasy and paranoid echoes of the Manson murders still reverberating in the atmosphere, and the depths of the Nixon era of corruption and betrayal just a few years away.  And it most certainly was the spirited work of the best ensemble cast of the year: Joaquin Phoenix, Josh Brolin, Reese Witherspoon, Benicio Del Toro, Owen Wilson, Katherine Waterston (the breakout performance of the year), and Martin Short (!!!!!) to name but a handful.

Do yourself a favour and don’t try to follow the plot or you’ll miss the point altogether.  Just hitch along for a wild, drug fuelled romp through the last flickers of that mythic pipe dream known as the 1960s.

1.  Under The Skin (dir. Jonathan Glazer)

In many ways, ranking the four or five previous movies on this list felt a bit of a redundant exercise, as they were all of such a high calibre that a five-way-tie could’ve easily sufficed. But when it came to choosing the best film of the year, there was no question in my mind.  As I’ve already made my feelings for this film clear in a previous entry (The Pure Cinema of Under the Skin), I won’t belabour the point. Simply put, no other film this year made me feel as much, as deeply, and with such resonance as Under The Skin.With his third film, Jonathan Glazer has delivered a flat out masterpiece of existentialist science fiction that I have no doubt will cement Under The Skin as one of the defining cinematic achievements of the 21st century.

And for anyone planning on watching the film, I strongly urge you to watch it in the dark and to watch it loud!

Editor’s note:  Andrew Johnston is a film and culture writer for Rrampt.  You can check out his column appearing regularly on Rrampt.