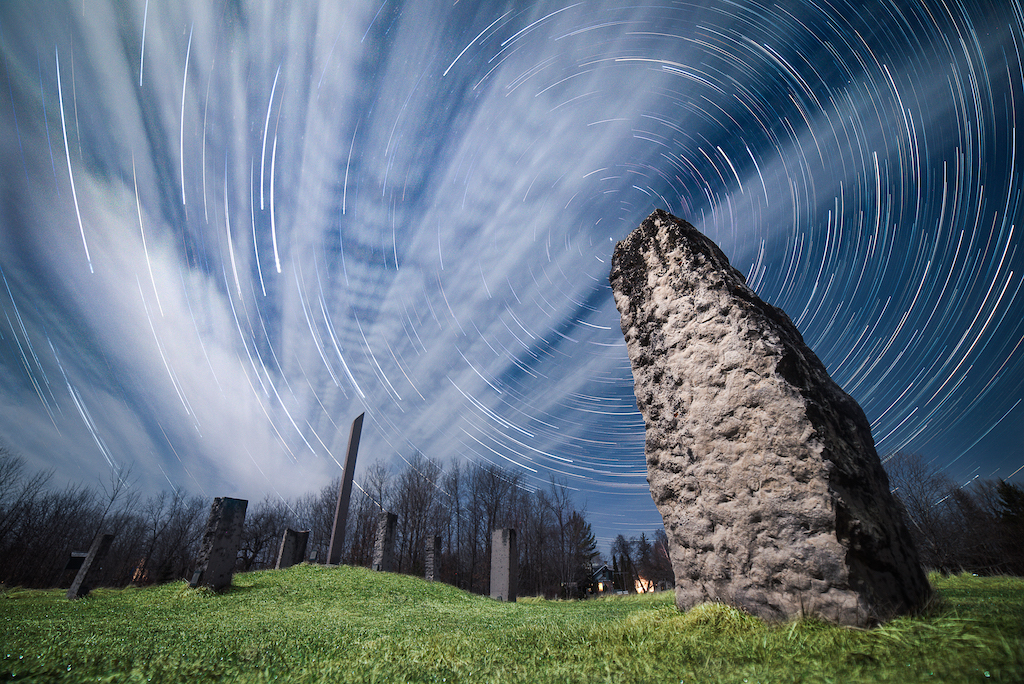 Remember Y2K? The catastrophe that never was? Banks were to collapse, planes to fall from the sky, the power grid to fail and humanity to plunge back into the dark ages. All this because computer software represented years using two rather than four digits. Across the globe, governments, corporations, and citizens foresaw an imminent future in which technology would fail and the systems which relied on it would crumble. Panicked preparations were made. Bathtubs were filled with water, savings accounts liquidated, weapons stockpiled, and candles hoarded.

As the Millenium drew near, while many looked to the future preparing for chaos and disruption, two friends in Big Bay, Ontario, looked to the past to undertake a monumental project founded on order and permanence.

The Loneys, Bill and Dawn, and the Irvines, Steve and Joan, were well established residents of Big Bay by the late nineties. The Loneys are the visionary proprietors and master gardeners of Keppel Croft Gardens, the internationally recognized garden found at the heart of Big Bay. In the case of the Irvines, it is a challenge to name a creative endeavor which the family does not successfully pursue. The families are part of a tight knit, collaborative, artistic community, where, according to Dawn, “We are in each other’s business, but don’t live in each other’s pockets.”

In discussing how to commemorate the year 2000, Bill and Steve knew they wanted to do something on a grand scale that would last for many years at Keppel Croft. Steve thought that a large henge would be a fitting project. He had visited Stonehenge in 1984 and his experience at the prehistoric monument stuck in his mind to the point that he recalls the time he visited, “4:30 or so”, the weather, “rainy” and who he met there “nobody, I got it all to myself.” He pictured a henge at Keppel Croft with a central pointer stone surrounded by carefully-laid megaliths, which would catch the shadow from the pointer stone at equinox and solstice. This suited Steve’s ambitious nature and his keen interest in astronomy. Bill on the other hand, while no less ambitious, does not match Steve’s love of the cosmos. With his experience in landscape architecture, he is more rooted in the earth. A henge – an earthen ring surrounding massive stones precisely aligned to mark celestial occurrences – was the perfect choice.

The idea took shape in 1998 and Steve set to work plotting precise locations for each of the stones. Enthusiasm for the project was high, in the Big Bay community and beyond, such that a “Keppel Henge Society” was formed of around 165 interested members. Each contributed $25 for membership and these funds were sufficient to purchase the henge stones. In October of 1999, those stones arrived, fresh from a local quarry. “In all the years I’ve known Steve I’ve never seen him as happy as the day the stones arrived”, recalls Bill. It’s easy to see why – after months of discussions, planning and painstaking design, the henge was about to achieve physical form, coalescing from conversations and computer designs into tangible permanence.

The stones were set, adjusted, and ready to be unveiled. For New Year’s Eve of 1999, a special dedication ceremony was held to vitalize the stones. Roughly 100 celebrants and Keppel Henge Society members were in attendance. The path to the henge, lovely even at night and in winter, was lit with candles while a bonfire roared beside the henge. Songs were sung and poems read. Sheila Rogers called in from CBC radio. There was merriment and admiration for the henge. The stones were well vitalized indeed, and not even one airplane fell out of the sky.

Over the years, various related projects have sprouted up near the henge, all relating to space, time or both. Steve and Bill will get together, generally over a cuppa tea, and one of them will say “You know what would be neat to do?” and they’ll be off on another ambitious project. As was the case with the analemmatic sundial to the east of the henge. The Loneys, while touring France, photographed a lovely sundial in Avignon. Upon returning, Bill showed Steve the photo and asked “Could we build something like this for the garden?” The answer was yes, and build it they did. In an analemmatic sundial, the gnomon, which casts the time-telling shadow, is not fixed, but rather must be positioned according to the date. And in this analemmatic sundial, the gnomon is you. When you visit (and you should), be sure to try it out.

There are many more fascinating features to be explored at Keppel Croft. Some, like the scale model of the solar system (spoiler: it’s big), and the analemma pattern, are found around the henge and clearly focus on the wonders of the cosmos.

The Loneys are assisted in their care-taking efforts not just by the Irvines, but by a group of local volunteers and friends (AKA the Green Thumbers), without whom Keppel Croft would not be the magical destination that it absolutely is. Visitors are welcome Wednesday through Sunday, and holiday Mondays May to October. Picnics are encouraged and $5 is the suggested entry donation – an absolute bargain (for reference, Stonehenge is currently charging £24.00)

Are henges relevant in modern times? Steve Irvine pauses briefly before patiently declaring, “For thousands of years people have made stone circles. With life, and how fast it is in modern times, how ephemeral … having something timeless where people can find their own meaning is so important. There’s something deep inside each of us which wants to connect to the Universe.”

This is the true magic of the Keppel Henge. It allows us to consider the earth we stand above, the star which slowly spins our shadows ‘round, the endless flow of time.

We are truly at the mercy of the earth’s forces, beside which our lives are but fleeting breaths. Standing beside the stones, we know that we were here, even if for just a moment.