Home Music The Hip to the rescue: Saskadelphia is our unofficial May 2-4 playlist...

When I woke up this morning, the Friday of a May 2-4 long weekend, there was a message on my phone from my brother. He had woken in the middle of the night to tend to his 10 month old and let me know that The Tragically Hip had just dropped a 6 song EP at midnight. He said he couldn’t wait until morning and was going downstairs to the basement to give it a listen before heading back to bed.

I read the text when I woke up at 6am and didn’t hesitate to make the EP the first thing I put on this morning (after I made coffee of course – I’m not an animal). The name of the album struck me as odd, but I guess it comes from the working title for Road Apples, the band’s third album from 1991, and guys wanted to stay true to that. After all, these are songs that could fit onto Road Apples quite easily, except for one.

I actually forgot this was the long weekend coming up, but there’s nothing like an undiscovered collection of Hip tunes to remind me this is when Summer begins in Ontario. Since this is going to be another unconventional summer, where no one knows what the hell to expect, it really helps to have something familiar to hold onto this May 2-4. And there isn’t much that’s as familiar to Canadians as Gord and Co.

The first tune, Ouch, is classic Hip through and through. It instantly sounds familiar. The nostalgia meter turned up to 11 as soon as I heard Gord’s voice backed by an instrumentation that only the Baker/Sinclair/Fay/Langlois combo could create in the 90s. Hearing Gord sing “Please give me more” in his iconic quivering tone followed by lengthy growls and a few Downie-esque yelps is exactly the kind of thing that raises hairs on my arm on the Friday before a long weekend. It’s deep in my bones. I could almost smell the campfire smoke, and taste the damp morning air lingering in my tent after waking up on a May 2-4 campout.

My favourite jam is Not Necessary, for it’s powerful guitar groove and chorus that resonates big time. “All these things I carry/ Well they’re just not necessary” is a line that will stick with me for a long time. Gord has a way of cutting through to the important stuff, and that advice is pretty important these days.

It’s nice to hear the crowd on Montreal – Live, and what’s even nicer is the slick little guitar intro that prepares you for a measured delivery akin to Long Time Running. It’s not clear what Gord means by his intro (do we ever really understand his cryptic lines? I’m still trying to figure out what the hell he means by ‘walking down the street shaking a banana at people trying to convince them it’s making a sound’) but when he says Montreal is a song ‘about the identification process’ he might be referring to the identification of a dead body as the tune is about a family preparing their daughter for a funeral. “Don’t you worry/ Her mother’s gonna make her look good” he sings in a macabre 38 Years Old-style commentary on the Ecole Polytechnique Massacre in 1989. What a beautiful song for such a horrible tragedy. It’s a testament to what the Hip are capable of impacting culturally, and why they’re so treasured. They tell us our stories, our Canadian triumphs and tragedies, and make us sing along so we never forget.

It’s hard to believe that Crack My Spine Like a Whip didn’t make it onto Road Apples as it would have fit perfectly, (possibly right between Cordelia and The Luxury?).  Gord’s lyrical rant mid-song is my favourite part. If the Hip exist on a spectrum between rock and country, Just As Well is a little more on the Country side of things, right next to the iconic Boots and Hearts.

On the final tune, Reformed Baptist Blues, Gord and the boys are clearly having a hell of a good time, and while it wouldn’t have fit on Road Apples at all, it does have a kind of Twist My Arm vibe – both are deeply rooted in the blues, albeit Baptist Blues much more openly.

The last few albums from Gord were solo efforts that signalled his move into reflective maturation with lyrical precision on getting a moment right or telling his life in a way TS Eliot poetically said: ‘Have known the evenings, mornings, afternoons,/I have measured out my life with coffee spoons.” But this newest offering is a throwback to a young band at their best and full of piss n vinegar. There is little reflection here, instead, an energetic commitment to meet a new decade head on. They tumbled into the 90s with more momentum than any other Canadian band and spent time there producing five albums that became the soundtrack to many of our lives. Even though my favourite album is still Fully, Completely, I’m open to the argument that Road Apples is the greatest Hip offering. I’ll play them all again this weekend just to be sure. They sound better with a fire crackling in the background anyways.

So, as I was three coffees deep into my morning, and close to five listens in, I got another text from my brother who told me he finally got a chance to listen to the album “at a volume worthy of Gord’s vocals” (I guess you can only play it so loud in the basement at 1am with a 10 month old asleep upstairs), and he admitted it made him a little emotional. I think we can all get behind those sentiments. At least I’m suggesting we do this weekend. Make sure you play this album loud, and get ready to get a little emotional. Let Gord coax it out of you – it’s okay to let some emotion out on our second pandemic 2-4 here in Ontario. And put down all those things you’ve been carrying, at least for a weekend. They’re just not necessary.

And thanks for this uncovered EP from a band who’s created so many long weekend soundtracks over the years. Saskadelphia will be the soundtrack for May 2-4 2021. 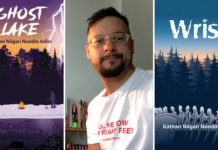