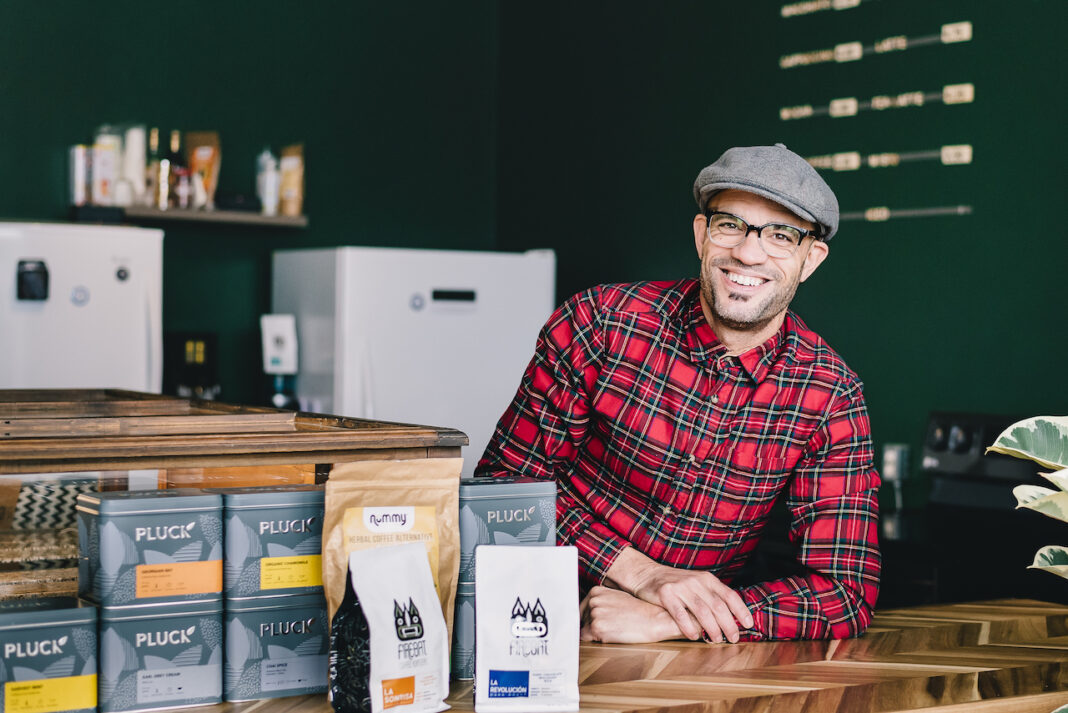 It’s a Saturday morning in late November, and Owen Sound’s just been walloped with a good three feet of snow, earning the city its title as snowiest spot in Ontario. The common sentiment around town is: ‘At least it’s not Buffalo’. Gotta love that glass-half-full spirit of Owen Sounders.

Many have been forced to stay home, but not everyone’s closed on this snowy Saturday morning. Justin McMillin, owner of the new Kitchen/Pastry/Coffee spot The Goods has made it in. How do I know? Well, let’s just say there are a few things I’ll venture out into the snow for: coffee is one of them. Especially Good coffee. My friend Russ said he audibly groaned when he took his first sip. I might have done the same.

You might be asking how one induces such a java-fied experience? Well, Justin McMillin isn’t exactly a lightweight when it comes to beans. He’s been around an espresso machine for most of his life and he’s bringing his expertise to Owen Sound’s River District (158 9th Street East to be exact).

Tucked into an atmospheric storefront with big front windows and slick, simple signage, this day marks his official soft open – just coffee. Next week, he’ll bring the rest of The Goods: the pastries. Officially titled as Kitchen/Pastries/Coffee, his niece Cyndel, a chef, will be delivering weekly lunch specials starting soon. The fact that this place is many things is a testament the owner’s multi-faceted persona. Justin is an OCAD alumni, photographer, artist, barista, father, and now a local entrepreneur.

As we sip americanos and chat about terroire, the sun spills into the freshly painted shop. I take this as a learning opportunity and ask him what terroire means; he explains it as “the environment coffee is grown in…everything down to the soil,” and likens it to wine.

McMillin became interested in the culture of coffee after he quit his corporate gig and went to work for a Toronto café. He admits it wasn’t the smartest move financially, but he wanted to learn more. “I realized there’s more to this product than it just being this black bean,” he says. “A lot of people have the understanding that coffee should all taste the same. Ironically, commercial coffee is kind of stuck because they have to over-roast their beans to maintain the same flavour profile, but there’s not two coffees in the world that taste the same if you roast them properly.”

He doesn’t like settling for mediocrity and puts a lot of pressure on himself to give it his all. This commitment to craft led to him taking on the head barista role at a the well-known Bar Buca in Toronto where he gained fine-dining experience. He also ran the beverage program and learned from some key figures in the culinary game. “I developed a real appreciation for how Italian coffee is made,” he says. Like cortados, which is the drink of choice for a few patrons this morning. One woman indicates how glad she is to see it on the menu and leaves happy. Being a standard, Americano drinker, I have always wondered what the heck a cortado was and finally take the opportunity to learn, which leads McMillin to then describe his all-time favourite:

“Me personally, a pour-over with a really good coffee that’s properly roasted…things like an Ethiopian Harrar,” which is what he drinks at home, a place that was purchased recently and rather serendipitously, in fact.

When he and his wife, Tiffany, made the decision to leave the GTA for the shores of Georgian Bay, he had Owen Sound on his mind. They were visiting the Grotto one weekend and decided to make a visit to the town McMillan used to play baseball against as a kid. He said to Tiffany: “Let’s just see what’s going on in Owen Sound, because I know it’s beautiful around there…since I’ve been a kid, I’ve had this idea [of Owen Sound] as this place on the water…in a valley.”

They stopped in on a Sunday, and though everything was closed and there were several shuttered storefronts at the time, McMillin saw potential everywhere. “I also appreciated seeing art galleries everywhere, so it’s clear there’s creative content to this town” he says, and it should be noted that both Justin and his wife Tiffany are excellent photographers (yeah, these two have a lot of talents – check out Tiffany McMillin Photography).

They made a quick decision to relocate and while they were eating breakfast at Bishop’s Landing one morning, they looked across the water and admired a beautiful burgundy house that would actually become their next home. The former councillor Gary Levine’s property looks out to the water over Kelso Beach and was definitely a selling point for moving to the area. “I love the fact that I can wake up at 5am and go for a swim right across from my house,” McMillin says. “I can go fishing.”

As we take our last sips, McMillin offers some of the aphorisms that guide his life, things he’s passed onto his son: “Settling for something less than what you are is no way to do life,” he says wisely, and “I’d rather you fail miserably trying to be the best you can, than be successful at something you hate.”

It’s pretty clear that Justin is taking his own advice by working hard at something he loves.

He loves coffee, but he also wants to be more than a just coffee shop; what he really wants is to be part of the community in Owen Sound and feels as though he and his partner have been welcomed.

Stop in for a coffee and a pastry between 8 – 5 Monday to Saturday, and keep an eye out for Chef Cyndel’s weekly lunch specials starting soon.

You can follow The Goods @thegoodskitchenpastrycoffee on Insta and email Justin about catering at info@thegoodscafe.com