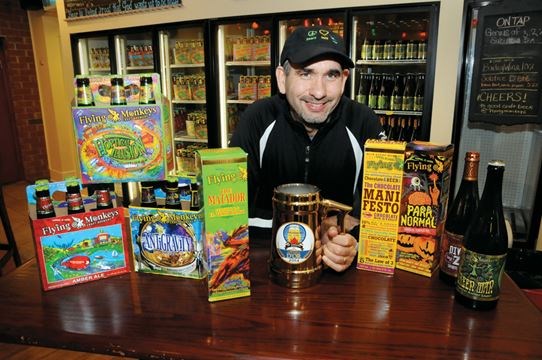 With the slogan “normal is weird,” Flying Monkeys Brewery promises the extraordinary, and do they ever deliver!

From the vibrant labels to the unusual nature of the brews within, everything about Flying Monkeys is unique. Even the Barrie taproom is a psychedelic wonderland, covered in old license plates and concert posters from a bygone era.

I’m writing about some of their more unconventional beers, ones I’d encourage you to try. And while you’re at it, try the others they have to offer!

Because beer is good, and craft beer is even better. 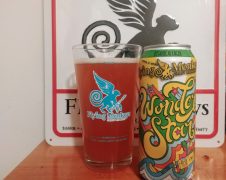 Nose
Fruit, citrus, and a hint of herb

Taste
The immediate sensation was sweet, a little bit sour. As you get into it, the citrus notes from the hops are more evident without being overwhelmingly bitter or hoppy; it’s more reminiscent of grapefruit. The last thing you’ll notice is the juniper, giving it a little bit of a gin-tinged finish.

Body
This is a light-drinking beer, with a crisp mouth feel.

Where to Enjoy
This beer is appropriate for a hot summer’s day on the deck when the sun is at its highest. 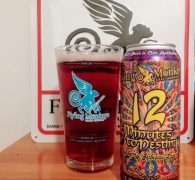 Appearance
A translucent, deep red beer with a frothy head.

Nose
The raspberries dominate the smell of the beer.

Taste
This beer is more subdued than the Wonder Star, but no less complex. While the raspberries are the first and most evident flavour, the underlying lager qualities are still quite prominent. The hibiscus makes itself known at the back of the palate, with a hint of tartness.

Body
This is another light-drinking beer. It’s airy with more of a suggestion of fizziness.

Where to Enjoy
By a window after a hike in late fall, when the maple trees match the colour of this beer. 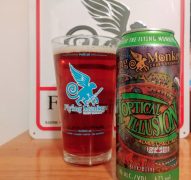 Nose
The smell is hop-forward with just a hint of malt.

Taste
First impressions are often deceiving, such is the case with the Hoptical Illusion. In contrast to the hop-driven smell of the beer, the flavour is quite malty. The hops appear at the periphery of the flavour profile, becoming more prominent later. The finish on this beer is bready with a touch of sweetness.

Feel
This is a heavier, smooth-drinking brew.

Where to Enjoy
Ideally, by a fireplace on a winter’s night. Failing that, a traditional English style pub with a well-worn oak bar will do. 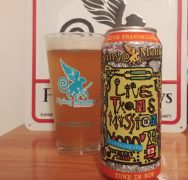 Nose
Citrusy, hoppy, with a touch of coconut.

Taste
Hops introduce themselves quite early on. Digging deeper, one can detect the grapefruit and orange peel, nicely complimenting the citrus flavour from the hops. The very last, and most surprising thing to notice is the strong taste of coconut, only revealing itself at the end.

Body
This is a light, creamy ale.

Where to Enjoy
On a beach. This is a long weekend beer! Perfect for sipping after a swim while there’s still lake water dripping off your hair into the sand.

Geoffrey James of Third Development and his “4 Minute Escape” music