Rrampt.
Home Rrampt Articles The Art of the Backyard Rink 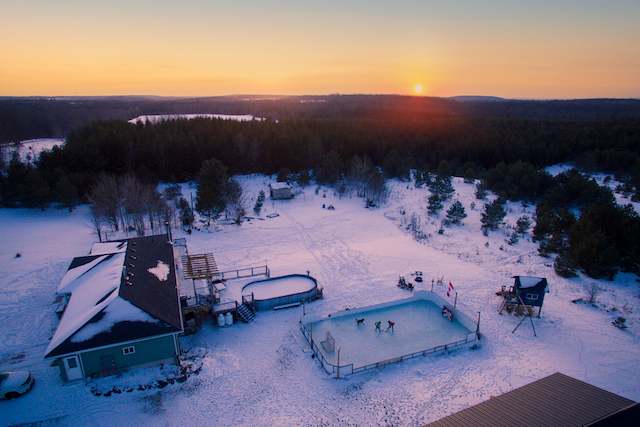 If you grew up in this place we call Canada, there’s a good chance the coming of winter meant one thing to you: hockey.

For all the stereotypes that go along with the Great White North and hockey, the data suggests the vast majority of us didn’t get too far down the path to the NHL, but the collective ideology of what hockey means to Canadians is certainly around. We didn’t all play, of course. It’s not mandatory here, but even if you’re not a fan of the sport, the culture, or the idea of winter that brings pucks along with it, hockey is a part of the fabric of our society.

The kicker is, and in the present day more than ever, hockey can be pretty expensive. Further, it’s time-consuming and very demanding for the families that tackle it head-on for their kids. It means purchasing a seemingly endless array of expensive equipment, early mornings, and weekend tournaments that suggest hotel stays, eating at restaurants, gas costs, etc.

It can be a massive undertaking to perfect the craft over time, and I’m going to go out on a limb and say that picture doesn’t accurately represent what hockey should mean. The collective perception this nation holds so tight over hockey is a simpler one that’s not so critically dependant on economics; hockey’s misty-eyed, wistful symbolism in Canada doesn’t involve arenas, impressing scouts, or playing in front of thousands of crazed fans; it involves a frozen pond, a couple of boots used as goal posts, and some skates. That’s it.

It’s in that spirit of realization we implore you – whether or not you’re a hockey fan – to consider the culture of backyard rink-building in this region and beyond. As an epicentre of culture, nostalgia, and memory-making, the art of the backyard rink should be celebrated at all costs. It’s here, after all, the sport got its start and began its ascent to holding such powerful meaning to so many.

Shelley Jackson and her family really get that. They’ve placed their hockey efforts into the creation of a special place on their property where they can gather as a family and be active together, snipe the odd top corn, and be on the ice. But hey, anything worth doing is worth doing right. The Jackson clan began their impressive rink building careers seven years ago when their eldest son was 4-years-old. What started as a small 12 x 20 ice cube surrounded by 2×4’s is now a 32 x 48 masterpiece of Canadian backyard engineering.

“The learning curve is steep,” she laughs. “Everybody underestimates slope… We started with 2×4’s and now we have a custom metal frame and puck board. It’s 2 feet tall on the sides and 4 feet tall on the ends – strategically built that way for shovelling the snow off and to act as a windbreak.”

An accomplished photographer, Shelley’s photos of her kids playing puck in the backyard are epic and suggest they’re a lot more serious about hockey than they really are. Which is refreshing and inspiring as a parent that’s undertaking a rink (well, it’s at Gigi and Grandpa’s place) for the first time this winter.

“Winters used to suck,” says Shelley. “When we had kids it became fun… The kids love to play hockey but we’re not hardcore. My husband is not a hockey fan – he’s a welder and the guy who would do anything for his kids.” There’s no going to the NHL, no AAA. It’s 100% about fun and getting outside together… My thing is documenting the days. Kids grow up so fast and these times will be gone before you know it.”

The rink has garnered a ton of attention on social media and helped to spread the good word on the joy a backyard arena can bring to a family – but it hasn’t stopped there. Far from it. Sharing photos of their property in the Grey County heartland south of Holland Centre has attracted the cameras of the CBC’s The Nature of Things with David Suzuki where they’ll be featured in an upcoming episode this February.

It also prompted the Rink Watch Project at Wilfrid Laurier University whose aim is to study the effects of climate change on outdoor rinks nationally. As part of the study for the last five years, they’ve unearthed some eye-opening statistics that suggest overall skateable days are declining consistently to about 73/84 skateable days in 2020 due to an increase in mid-winter rain.

Perhaps most notably, Wayne Gretzky’s Hockey School reached out and asked to use a few of Shelley’s shots. She agreed, in exchange for her boys being able to attend camp. “They were there to have fun, but the coaches are absolutely incredible,” she says of the experience. “Overall it’s been an awesome way to meet people, even though it’s in our backyard.” Meeting Walter Gretzky a couple of times before his passing is a prime example. He’s “the backyard hockey dad,” says Jackson.

So what’s next for the rink? The family thinks it’s a trend that COVID brought out in families all over Canada and one they’ll continue. They think they’ve probably reached critical mass on their own rink at this point, but add there’s a lot of room for custom decals on the boards, and “maybe we’ll add four more feet… “the kids can help shovel now,” laughs Shelley.