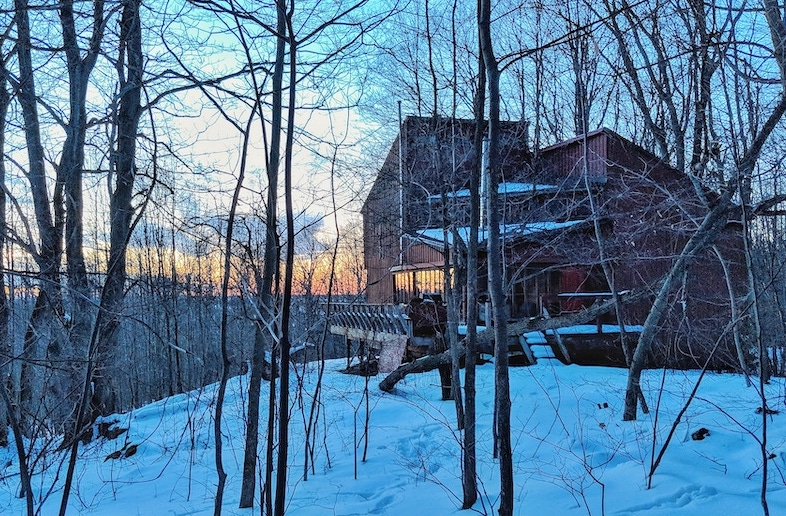 When I first heard about the UTOC cabin, I was an undergrad at the University of Toronto. A country-raised kid with a penchant for outdoor adventure sports, I was searching for a means of escape from the downtown campus’ incessant urbanity and brutalist concrete architecture.

A handful of the school’s clubs promised some opportunities to get students out of the city and connected with the natural world, but one organization in particular possessed the crown jewel that could truly make this happen: an underfunded outfit of outdoorsy students called the University of Toronto Outing Club owned and operated a mythical cabin somewhere in the here-there-be-dragons hinterland of central Grey County. I signed up to be a member of the club at my first opportunity.

If you’ve ever visited Metcalfe Rock – the tall, long, strikingly impressive stretch of Niagara Escarpment near the miniscule hamlet of Redwing (southwest of Collingwood) – chances are you’ve also come across the UTOC cabin. It stands on its lonesome directly situated on the main Bruce Trail, the only structure anywhere near the base of the cliff.

Tucked in amongst the mature maples and tumbled moss-covered boulders, it’s an unusual looking building – wooden clad, a couple of stories tall, with odd geometries, windows where you wouldn’t expect them, and a peculiar build quality. Handsome in a way, but to be honest, it looks like a glorified tree fort or clubhouse – and that’s exactly what it is.

The small parcel of land was purchased in the 1960s in what was then a very remote location chosen to minimize contact with the artifices of city life and maximize accessibility to nature and outdoor sports. Downhill skiing and rock climbing were top of mind for the club’s pioneering members, and so where could be better than a few kilometres from southern Ontario’s best slopes at Blue Mountain, and a literal stone’s throw from some of the best bullet hard vertical limestone this province has to offer?

When I was a student member, we would organize weekend trips in all seasons for all types of activities. Rock climbing was my main interest, and in fact my very first outdoor lead climb was on a particularly slick (and stiffly graded) 5.7 not 50m from the cabin’s fence line. But the adventure opportunities were endless. Excursions into Metcalfe’s deep, dark, winding, and still frigid midsummer caves felt like a forbidden, Tom Sawyer-ish thrill.

We embarked on day hikes to explore the expansive lookouts and fern gully crevices of the Bruce Trail system. Perhaps the best trips of all were midwinter, learning to cross country ski in the perfect powder snow of Kolapore Uplands wilderness – 60+km of well-maintained trails in a surrounding 300 acre wilderness paradise. A 20+ person ‘Survivor’ style weekend, complete with challenges, puzzles, and cutthroat voting tribes became a popular and ongoing Club tradition.

I fondly remember an annual ‘gourmet night,’ where members trotted out their finest recipes that could be made on a student budget using blunt knives and old aluminum pots and pans in a crowded and dim kitchen with four underpowered propane stove burners. I can’t recall a single dish, though I doubt any would have been awarded a Michelin star. I’m sure enough beer was consumed that we could easily congratulate ourselves, regardless.

Not much has changed at the cabin in the 50 years since construction. It remains unelectrified and off the grid, and still unplumbed. The kitchen is sparse, with well-loved plywood countertops and open cupboards. Water comes from jugs filled at an ever-flowing ice cold and perennially potable spring, audible through an open window on an otherwise silent night. A cast iron woodstove has a complex matrix of clotheslines strung above it, waiting ready to dry sodden mitts and snow-pants after a long winter’s day out. A recent addition of solar powered indoor LED lights to augment the propane sconces has edged the ambience, somewhat reluctantly, into the 21st century.

It’s a testament to the enduring pull of the club and the romance of its history that the cabin still stands. It isn’t easy to organize overworked, endlessly busy, and flat-broke undergraduate twenty-somethings to maintain a clubhouse more than a hundred kilometres from homebase. Nonetheless, for half a century, UTOC has managed it.

And though the years haven’t refined the space, it remains upright, warm, dry, and inviting. The club and cabin have never been funded by the university proper; it all operates on meager member fees, alumni generosity, the occasional weekend rental, and relentless dedication to tradition.

If you’d like to experience this unique piece of Ontario outdoor sports history, check out www.utoc.ca to learn about some of the ways to become involved. Or, rent the space to share with friends and spend a few nights in this rustic relic yourself. Maybe create your own Survivor style weekend complete with games, puzzles and challenges…and gourmet style meals of course. I’m sure your dishes will be much, much better than our shoe-string budget student attempts.

Photos provided by the UTOC