Rrampt.
Home Lifestyle Summerfolk could never happen without the volunteers 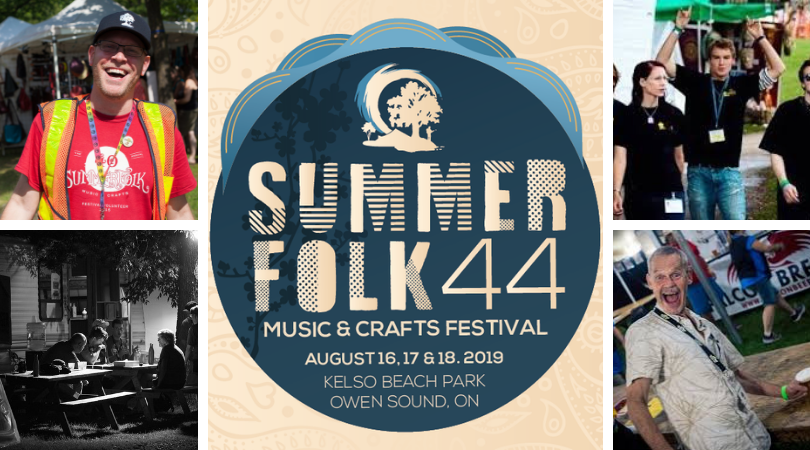 Summerfolk is entering its 44th year. Over the decades, it’s attracted legendary musicians from across Canada and talent from around the world. But no matter how good the lineup is, Summerfolk could never happen without a team of volunteers. From setting it up to keeping it running, there’s a lot of work that goes into putting on a good show.

I sat down with returning and longtime volunteers Robert Menzies, Jon VanDyk, and Aaron Top to talk about their experiences with Summerfolk, and get a little insight as to what goes on behind the curtain at Owen Sound’s own music and arts festival.

How long have you been volunteering with Summerfolk?

R: For me, it’s been probably around fifteen years or more, and I’ve done a few different jobs there. So it’s been four or five just at the sharing circle.

J: Yeah, around fifteen years for me, too. This year will be the sixteenth.

A: I’ve done two summers in a row. I’ve gone to Summerfolk when I was younger. Not as a volunteer, though… But it’s nothing new to me.

R: And we must like it because we keep going back.

What volunteer team are you a part of?

J: I have been on construction since 2003, and exclusively staging since 2006.

A: I’m on instrument shuttle, so I get to lug everybody’s band equipment around! Which is pretty fun. I get to meet all the bands and watch all the bands backstage.

R: A whole number of years ago, I started off on the performer’s shuttle bus, which would mostly run people back and forth from the hotel. A couple times I’d take a special trip down to Toronto and pick up somebody either at the airport or the train station. Then I got into the retail tent, which was also cool because I just kinda stood there… [Laughs] and then, the last four or five years I’ve been at the sharing circle. And recently we’ve incorporated the wall of poetry.

J: Well, I had a few friends who were doing it… I kind of got roped in and made a whole bunch of new friends who are now some of my closest. I just kept doing it. One of my friends says it’s better than Christmas! So why wouldn’t you keep going back?

R: For me it was when we moved to Wiarton… one of the people who helped us move in was heavily involved with Summerfolk, and they got us involved as volunteers. A lot of people get involved through word of mouth or various connections. But anyone can phone the Summerfolk office.

A: You could even just show up and volunteer! My buddy last year showed up and they just gave him a shift.

What do you find most rewarding about being a Summerfolk volunteer?

A: Camping on the volunteer campground.

J: That’s the most rewarding?

A: Well, you get to meet people. That’s the most rewarding.

J: When you’re backstage and there’s a band that comes in and you’re really wondering how you’re going to get from one complicated setup to the next complicated setup and you manage to pull it off in a really short amount of time… you feel pretty good. Sometimes those changeovers are super tight.

A: I like meeting all the bands too, obviously. I do Friday nights when most of the bands show up. I like taking selfies with them!

J: Yeah, you can get very personal with the bands sometimes.

R: Other than getting in for basically free, which is a personal highlight… [laughs] At the sharing circle, you’re a bit of a sitting target, in the best of ways. There’s a lot of interaction, and you pick up the vibes of people strolling by. It’s very positive.

What are some of your most memorable experiences?

R: When I was doing the shuttle bus, I had to go to the airport and pick up a couple of musicians. There was a female backup singer with a baby in her arms. And my first thought on that was “This is going to be a painful drive back if that baby cries and kicks up a fuss.” But the baby slept the whole way up!

The other person I picked up on that trip had an upright bass – which are big to begin with, even bigger in the case. And I was wondering how we’d get it into the van. I started to say “I have some bungee cords…” and before I could even finish the thought, he just said “NO.”

It just barely fit into the back of the van. The neck stretched all the way up into the driver’s area. Me and the woman with the baby were quite comfortable up in the front. The bassist was all squished in the back with this huge bass taking up most of the rest of the van. But the bass came first… Maybe the baby, but definitely the bass.

J: Yeah, most musicians would strap themselves to the roof before their instruments.

A: Last year I was able to bring up a solar telescope and a telescope. That was fun, being able to show people some of the stars.

R: Another thing I want to get in… is that the past few creative directors… James Keelaghan and some of the others. They have no real egos, and they make time for you. They’ve been really easy to work with. It’s like anything. It starts from the top down. If there’s something good at the top, it does trickle down and it helps keep everything smooth.

What would you say to somebody who’s considering attending or volunteering?

A: Do it. It’s an experience to be had for sure.

J: Yeah, they’ll take you under their wing. Whatever crew you end up on, you’ll be with a good bunch of people.

R: I’d say two things. First off, make the call to volunteer ahead of time. Secondly, volunteering may not be for everybody, because it does conflict with some of the music. If you just want to relax and enjoy the music, volunteering might interrupt some of that.

A: See, my crew’s not like that. Usually I can get another member of my crew to cover me if there’s a band I want to see. But that depends on what crew you’re on. My crew’s bigger than yours, so it’s easier to get somebody to cover me.

J: My crew’s usually pretty good for that, too. A couple of times I’ve said “Oh I really wanted to see so-and-so at the other stage.” But for the most part a lot of my favourite acts are at the beer tent where I do the staging, so I just stick around there anyway. You gotta show up with some energy, too. Usually by Monday I’m just sapped, and I have to wait ‘til Tuesday to help tear down.

A: I’m always full of energy! [Laughs] two summers ago I stayed up all night picking up garbage. It was 5 or 6 in the morning and nobody was awake. But then Serena Ryder’s gear showed up. She didn’t show up, but her gear did. And nobody was awake and ready to go, so I helped set that up

R: It is very much a community, or rather a family. You have to go in prepared to work with people, accommodate each other, and be a little flexible! It’s different from a job. You do it with a certain amount of love.

A: Yeah, there are a couple of things I wouldn’t mind… Not changing, but improving.

R: At the end of each Summerfolk, each crew chief can ask for suggestions. What went right, what went wrong. I remember suggesting moving the acoustic sharing circle a little farther away from some of the louder stages, as well as a little bit of amplification. Things might not happen immediately, but they have gotten us a nice amp and a microphone.

What are you most looking forward to at this year’s Summerfolk?

A: Partying with everybody!

J: I haven’t seen too much of the lineup. I need to go look it up.

R: What am I looking forward to most? The surprise. Every year, there’s always one or two acts I’ve never heard of that blow me away. I don’t care so much about the big names

J: Depending who they are…

A: Yeah, that’s a big part of it, is experiencing something new, the unexpected.

J: Yeah, you know if they’re on the bill, they’re going to be good.

Thank you for your time

A: Thank you! Interviews are fun.

If you’d like to volunteer this year, you can fill out an application at summerfolk.org.