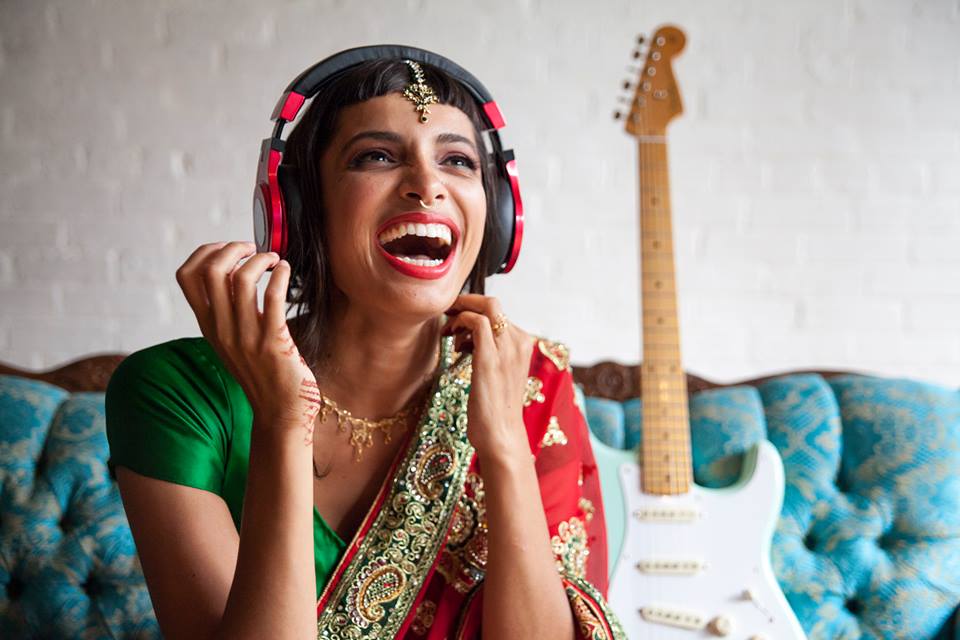 Perhaps you were lucky enough to catch One Billion Rising, an International Women’s Day event a few years back. Alysha Brilla rocked the Heartwood stage, with her full band, brass section and all, and kept our bodies moving and grooving all night. So, the Summerfolk team definitely knew what they were doing when they added her to the 2019 lineup.

Alysha Brilla is a Canadian jazz/alternative musician and songwriter, based in Kitchener-Waterloo. With her dad as a Indo-Tanzanian musician, and growing up in a biracial family, it’s no wonder her music is layered with intricate Indian and Afro rhythms & influences, and planted with deep socio-political messages. Not only a musician and songwriter, but she’s also a music producer. She’s the woman behind Sunny Jam Records, and self-produced many of her albums, including “Rooted” (2017), “Womyn” (2014) and “In My Head” (2013), all landing Juno nominations. On top of music, she also runs arts education workshops in schools, and she’s a strong advocate for youth, young women & other underrepresented voices.

In our recent chat, Alysha talks about music and life – how Bjork influenced the direction of the new album she’s working on, her recent tour with high school friend Sammy Duke (also at Summerfolk 2019), what issues are most important to her right now, and her personal yoga journey… among other things.

R: I saw you the last time you were in Owen Sound, at One Billion Rising, the International Women’s Day event at Heartwood in 2016… What’s changed in your life since then?

AB: A lot has changed – I have travelled more for music… I’ve played in Asia… Australia, and those were really formative because they opened up my eyes in a lot of ways…  Sometimes your music can feel super resonant somewhere completely different in the world… So, that’s a new thing that I’ve discovered.

R: You run your own music label. What’s that like and what does the split look like between performing, songwriting, producing and doing workshops. Is there any of those things that you’re trying to do more of right now?

AB: It is definitely a dynamic split between a lot of things. Performing is surprising a sliver of the pie… Honestly, it’s like a 50/50 split between producing and performing these days, and then admin is in there, 20 to 30 percent of it… I definitely wanted to do more production… I’m on my own most of the time and it’s much more introverted of a process, so it gives me a chance to be in that creative space.

R: You’ve been touring with Sammy Duke. What were the highlights of that tour?

AB: I’ve known Sam since I was 15 and we went to high school together, so we’ve known each other forever… playing music together. He, as a side band, plays bass and cajon for me, so a one-man rhythm section… He’s a great person, a great ally. He’s a male musician, but he’s so open and understanding about things that women in the industry go through – women and non-binary… I can talk to him about all sorts of socio and political issues… And that’s important to me… because that’s a large sense of what I talk, think and sing about.

R: Speaking about socio-political stuff, tell me about some of your advocacy work and if there’s an issue right now that’s most important to you.

AB: I have spent a lot of time working with youth over the past few years… My overall goal is that I want to see young people, especially young girls and young gender-variant people and young racialized people, very visible. It’s typically feminized people who are told to be quieter or softer, and I love seeing them step up and take platforms. When I’m touring or working in schools or with youth, it’s a huge focus of mine: a) leading by example and trying to inspire them to see a dynamic person, and b) giving them opportunities. On my next album, there’s a bunch of youth who I’ve met over the past 2 years, and I want to bring them together to be a side choir. And they are a bunch of femme people mostly, and they’re so awesome, so giving them chances to speak their truth.

R: …Amidst the busy-ness of touring, producing and festivals, what keeps you grounded?

AB: … Now it’s definitely [that] I need to go to the water. Even if I’m travelling… I’m like, “Where’s the creek? Where’s the river? Where’s the pond?” And I will go there and just sit and be thankful, and it’s really grounding for me. And also cooking is so grounding. I didn’t cook until I was 25 or 26… I had a really unconventional childhood and we did not have family dinners in my house… so in my late 20s is when I’ve learned to cook. At first I had kitchen phobia, but now it’s the most grounding thing… I definitely love cooking vegetarian Indian food… dahl or aloo matar …things like that. When I went to India, I had a couple cooking lessons with this woman and it definitely changed the way I looked at food.

R: You have been putting out an album a year for the past 5 years… That’s a lot of creative output, so what do you find really fuels you?

AB: Totally. I don’t know what was wrong with me, but I did it. It was a lot of work… I released my last album “Rooted” in 2018, and I don’t plan on releasing another record until 2020… I have songs coming into my head all the time still and I’m choosing to sit on them so I can do it a bit differently… My album “Human” is my personal favourite from a writing perspective and the memories I have during that process and that’s the one that didn’t get a Juno nomination, but I think my next record is going to be more similar to that album, and the way I wrote it and produced it.

R:  How will [this new album] be different?

AB: [For] “Human” I did a lot more programming, so this one will have more programming because I’ve been finessing my chops in that regard… [And] I’m planning on working with a composer in India… Basically, I started listening to Bjork. I never listened to Bjork in my life really until last year… and there’s so much Indian influence in her music… and I thought, “How did I never notice this?” I started watching Bjork interviews and saw that she was recording in London, England, but she sent her music to India and had strings recorded there… Similarly, for this next record, I’m going to do the production here in Canada, but I’m working with this composer in India… Part of me wants the challenge of not being there and seeing if we can communicate things over digital, so we’ll see what happens.

R: What else are you listening to right now?

AB: I’m listening to Digging Roots… they’re an awesome First Nations band in Canada… an amazing crossover of blues, reggae, folk. I played with them when I was in Australia … And I’ve been listening a lot to Fleet Foxes… they’re really influenced by the 70s and Nordic fairy tale lyricism. When I hear that music, I hear a lot of spiritual undertones. I’m always looking for that in whatever I listen to.

R: You have your yoga teacher training. What inspiring you to do that?

AB: … Yoga absolutely changed my life. I only have one tattoo on my body and it’s my thank you to yoga. When I was 19, I was living in Toronto and I was super depressed and I happened upon a yoga studio that this super blonde Swiss woman owned. I didn’t even know at the time that yoga was an Indian thing… and she toured me in the studio and gave me a free pass for a class. I was super broke at the time… and I went to that class and stumbled around the whole hour and felt like such an uncoordinated person, but then during savasana, I felt the most peace I had felt in a long, long time. That’s when I started doing yoga regularly and it helped me get through so much… When I was living in LA and surrounded by really nasty predatory men, yoga was my sanctuary. It helped maintain my physical and mental health through it all. It still remains to be that.

R: Do you have a daily practice right now?

AB: I do. Sam just toured with me and he knows I will just go do my thing for a while, and I’ll go find a quiet place and be on the floor, just moving through my body, and that’s the kind of beautiful, slow thing that people are used to with yoga. And then, Sam will be like, “Alysha, why are you doing handstands and cartwheels in random places?” and that’s me trying to get into body again. It certainly is around me all the time.

R: What can Summerfolk goers anticipate in August, from you?

AB: … A fun, soulful show. I think my shows aren’t like spectator concerts. I really love involving the audience. My favourite thing is having people sing together. That’s something that always happens at my show. They can expect something interactive, very present. I love reflecting what’s happening in the room at the time, and where we are at the time.