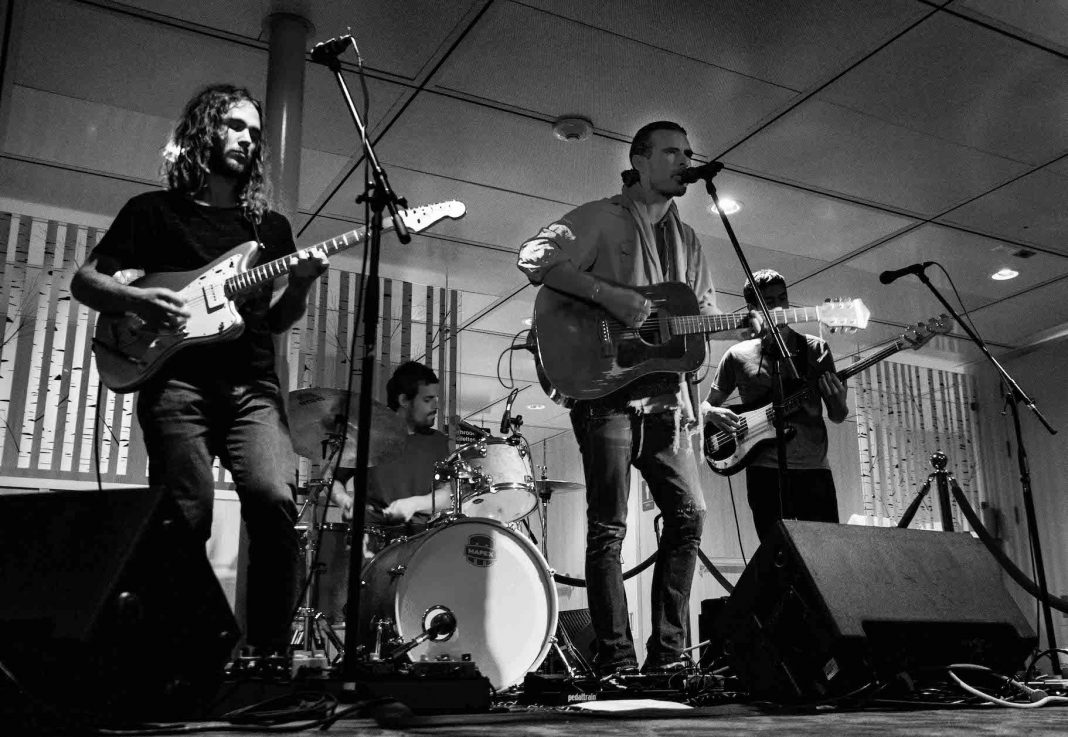 The crossing from Tobermory to Manitoulin Island and back is one that I’ve taken a few times, but none of those trips have compared to the evening I spent aboard the Chi-Cheemaun last weekend for the Dinner Cruise and Concert, featuring Calgary band, Reuben and the Dark.  Admittedly, this was my first time attending one of these cruises.  Folks, let me tell you – I’ve been missing out, and if you’ve never been on one either, so are you.

The evening began as every journey from Tobermory does: sailing out past rocky shores whose rugged charm never ceases to amaze.  Only this time, we got to enjoy it through the wide windows of the dining room while feasting.  The feeling was decadent, made even better by the fact that most of the ingredients for the meals were either locally- or Canadian-sourced.  Savouring coffee and dessert with my friend while the sun dipped below gentle waves, casting pink wisps through the sky, this moment alone was perfection.  And really, the evening had barely begun.

A brief pause at South Baymouth gave a chance to take in the panoramic beauty of Manitoulin at dusk.  Even in shadow, this island radiates magic.  Out on the deck, we watched the first star appear over the forested horizon.  Of course, I made a wish, the same one I always make; when you catch the first star over Manitoulin on a stellar night like that, it has an even better chance of coming true.

As tempting as it was to stay out and stargaze, the pull of music was stronger.  It was Reuben and the Dark that had initially drawn me to this event, after all.  I’d never heard them live, and the experience was greater than I could have imagined.  There we were, a room full of people rocking gently across Georgian Bay as night fell.  The music sauntered in mellow with You and I and Wildlife, and the crowd was captivated.

With two successful albums under their belt, Reuben and the Dark is known for their soulful lyrics and finely layered instrumentals.  The magic of the evening worked with the songs to build a sense of intimacy as we sat shoulder to shoulder, hypnotic harmonies stirring the air.  One of the perks of small concert venues is the connection bands can have with audiences, something that these guys took full advantage of.

Band lead, Reuben Bullock, joked about the challenge of staying upright to play while the ship swayed, but the band grew sea legs like champs and rocked out one of the best live shows I’ve been to in a while.  At one point, Reuben abandoned the stage to walk amongst the crowd, pausing to sing lines one on one to people along the way.  Full audience participation was required to raise the roof to Realize, and their encore brought us in close to envelop the stage.  But perhaps one of the most unifying moments of the evening was their cover of Bobcaygeon, a quintessentially Canadian song by the quintessentially Canadian Tragically Hip.  No doubt, everybody in the room felt the music in their bones as Reuben and the Dark paid tribute to the iconic group.  Although strangers from near and far, we were all connected.

It’s difficult to capture the full weight of that evening in words.  While the cruise itself – from dinner and scenery, to great music – was gorgeous and edging on blissfully indulgent, it retained the small-town feel that is such an important piece of this area.  It’s definitely a little adventure you should have at least once, and luckily these cruises are happening throughout the summer.  The next one sets sail on July 24th and features the musical awesomeness of Birds of Bellwoods.  Grab your tickets and experience your own bit of magic!