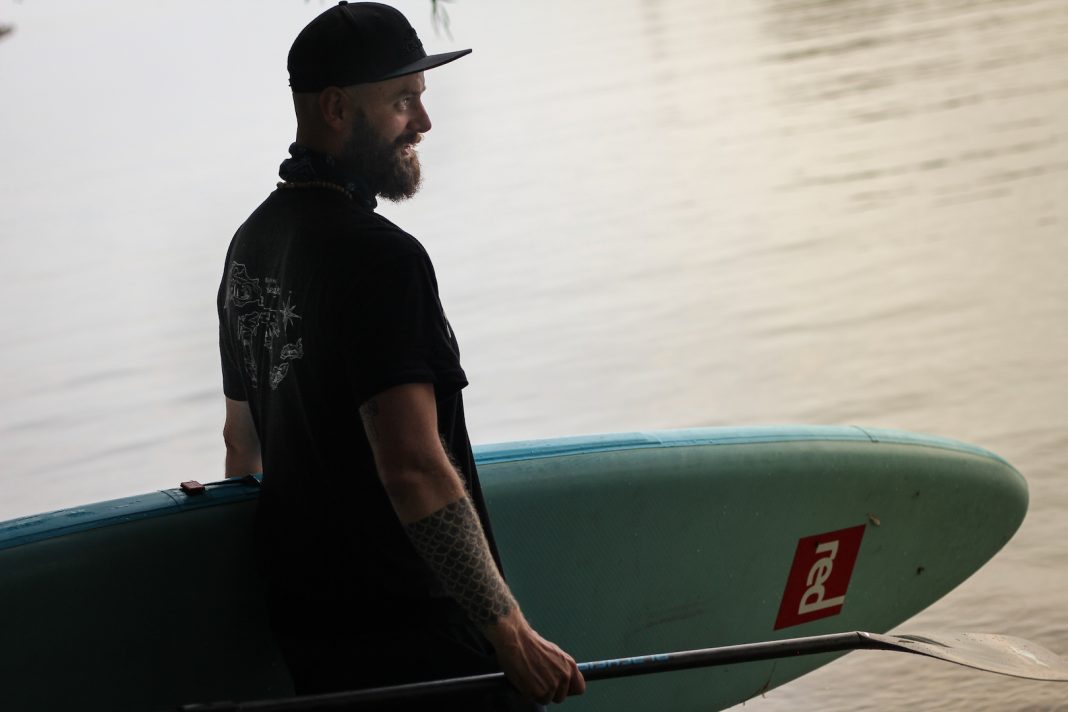 How many days a week would you say you feel stoked? Two days? Four? Maybe even five? Well, how would you like to feel perma-stoked? Just take a page from Derik Hyatt’s book – find something you love and put that first above everything else (well, almost everything).

Derik’s passion is surfing and he’s been able to live a life full of stoke because he’s made it his focus. He’s moved across the country and back in search of the ultimate waves. He’s even named his podcast PermaStoked, a nod to his barbarian lifestyle but also an allusion to perma-frost, something surfers in Canada know all too well. When the autumn storms roll in, the boards come out.

Derik, like so many I know, succumbed to the romanticism of the West at an early age. Those Rocky Mountains sure are pretty! And Tofino’s super unique. But unlike most I know, he decided to move back to Onterrible (as the Western folks say). And for no other reason than to surf more.

His move from Leamington to Vancouver in 2008 was meant to ensure a steady stream of Tofino waves from which to amplify his passion. But he found the time and money it took to actually get to the Island from Vancouver was a major obstacle. “Being in Vancouver and hopping over to the island isn’t cheap and isn’t easy,” he says.

But he had been willing to put up with it because riding waves is his jam. But then he started hearing whispers of this ‘Great Lake Surfing Scene’. Tasty Autumn Huron waves popping up in his newsfeed care of Great Lake stewards of stoke like Larry Cavaro, James Carrick, and Tarah Coates of SurfSup Eco Shop .

So he did what many have not done before him. He moved from Vancouver to Owen Sound. Yes, you read that right. He left the Tofino surf scene for the Great Lakes. He arrived in July with just a couple boards and an open mind.

He has been asked a number of times, though: ‘Why would you move here?’ his reply is always “Why wouldn’t you move here?” There is definitely an attitude among Owen Sounders that there are better places to live, but as Hyatt explains, the Scenic City is central to all the great surf spots. And it’s right on the water itself.

“I really had my eyes set on Grey Bruce,” he says. “And then I get here and I’m like wow – this feels like the undiscovered land in a way. I’m out there paddle boarding and no one’s out there,” which is something that he loves but is also puzzled about. And he’s right to be puzzled – why aren’t there more people out on the harbour and rivers. His new home in Owen Sound is right by the water so he gets out for a daily SUP paddle. He loves the easy access to the bay. Out in Vancouver, it was a day of travel to get to Tofino.  “When I go out my front door [in Owen Sound], I can head left and I’m going into the harbour or I can turn right and I’m going down the Sydenham. It’s amazing. Who needs a gym membership.”

On the day we meet up to talk surfing, a storm is coming in and Hyatt is getting ready to finally hit the fabled Kincardine pier. We meet earlier than planned so that he can get a solid session in. I had my own plans but cancelled them in favour of a little Sauble session myself after catching Derik’s contagious stoke.

Hyatt is not only amped for the Kincardine waves but the whole scene that extends up the peninsula and along the Georgian Bay shores from Meaford to Collingwood.  The word ‘scene’ is always synonymous with ‘people’ and it’s no different here. He’s hoping to meet some good Ontario folks that he can surf with and host on his podcast.

Cavero and Coates have already been interviewed by Hyatt, but he’s looking to interview more who rock the fresh water rollers. Overall, his guests have mostly been from the Tofino scene since that’s where he’s been living for the last 12 years.  He only just arrived in Owen Sound in July and now belongs to a crew of over 2000 Great Lake Surfers (myself included) – at least that’s how many subscribe to the Facebook group started by James Carrick. Hyatt is so new, he doesn’t even have any furniture in his downtown apartment yet. More importantly, he doesn’t have all his boards yet. And even more importantly, his partner has not yet joined him. Nor his dog.

Sure, he misses Tofino – let’s be real, when most people think of surfing in Canada, they immediately think of Vancouver Island. That’s what I thought when I was growing up and that’s where I went in my twenties to learn. That’s where Hyatt went in 2008 to take his love to the next level after testing the Lake Erie waves in his youth. He left his hometown of Leamington to be closer to the saltwater action.

During the time he was away, the sub-culture of the stoke was slowly bubbling under the surface in Bruce Grey Simcoe, and it wasn’t long until he started following the Great Lakes scene with serious interest.

“Seeing Surf the Greats and all these things taking off here, got me thinking ‘wow, there might be an opportunity to come back eventually and be part of that,’” he says. “I thought I’d probably get more waves if I came home.”

And so in July of 2020, he did. He saw what was happening here and knew it was time to come back. He brought his brand Freshwater Surf Goods with him and his PermaStoked podcast. He’s likely to find a few people to interview in Kincardine. It’s become the mecca of surfing in this area. You’ll find most serious surfers there on any day with a strong Northwest wind. Its central beach and long pier offer an easy access point for every level. The waves in the Great Lakes are much messier than the ocean because they’re wind driven, which is why the Fall is often prime season: the water is warm and the winds are strong so waves form more easily.

Hyatt admits that people often laugh when they hear about surfing the Great Lakes, but they don’t really know what kind of conditions can occur each Fall and Winter for those willing to brave the icy Canadian climate. It isn’t for the faint of heart or those who can’t handle the cold. First of all, it requires some gear – a 5/4 wetsuit, boots, mitts, and a hot cup of Timmies in a thermos waiting for you in your vehicle.

And no one in this circuit, including Hyatt, is laughing about the sport’s potential here. “The Huron Coast could become the next California,” he says without a hint of irony. Think about it – the Bruce Peninsula, Sauble, Southampton, Port Elgin, Kincardine, Goderich, Bayfield… all surf spots. Then there’s Georgian Bay – Meaford, Thornbury and Collingwood. And Hyatt’s goal is to bring the whole scene together with Freshwater Surf Goods. He gives me a shirt after our visit and it’s slick design has made it one of my go-to tees. It’s in the rotation for good now.

Not only do I dig the design, I’m a fan of his whole branding and vision. Put simply,  he’s determined to unify the Canadian surf scene. He wants to do what every government in power has been trying to do since 1867: unite the East and West. Not an easy task, but possibly in the name of stoke, the surfers can bring the country together.

“I’d like to be a part of growing the industry in Canada to the point where we have a map of all the surf spots in Canada, all the surf shops…you’ve got the West Coast, the Great Lakes division, the East Coast,” he imagines.

His vision started a little smaller though: “I just remember wanting to rock a shirt with Lake Erie surfing,” he says. “I wanted to create something with some real artists behind it and some Great Lakes clothing that people can wear with pride….that’s the vision.”

Surfing and art – now I can get on board with that. We’re a fan of both here at Rrampt.

My favourite of his designs is the Endless Winter line. It’s a way to reconcile our love for surfing here in Ontario with our acceptance of long winters. We may not be California or Tofino, but we’re just as stoked to catch waves as anyone else anywhere else. – we just have to be more patient for the conditions, more adventurous in seeking our spots, and more resilient to put up with the cold. We’re Great Lakes people who go out when the storms come in and aren’t afraid to pee in our wet suits to keep us warm (every GL surfer knows exactly what I mean).

Because in the end, we’re a bunch of kooks who are permastoked for catching waves. I think Derik Hyatt and his Freshwater Surf Goods will fit right in here.