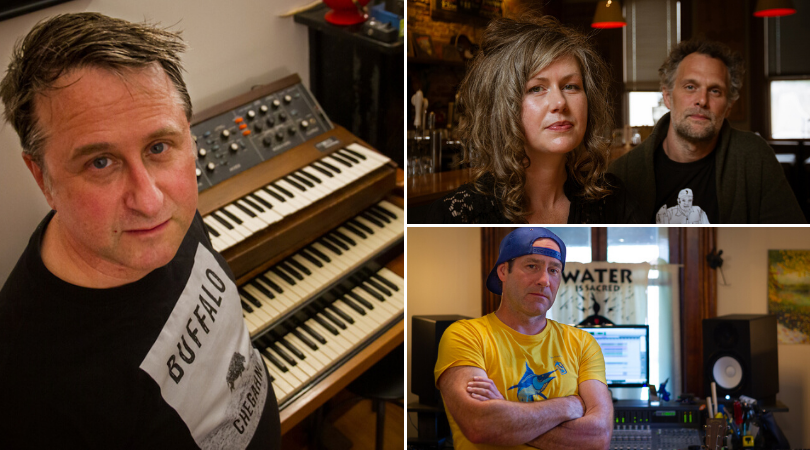 Live music is deeply rooted in Owen Sound. It’s easy to imagine the town of Sydenham, back in her rowdy heyday, ringing with saloon music. Sailors and locals alike would belt out the bawdy hits of the day from their tavern of choice, until the revelry and racket inevitably spilled into the street. The Roxy Theatre, formerly the Griffin Opera House, still sounds amazing at 106 years young. Summerfolk, about to celebrate its 45th year, is a top shelf festival landing sought after talent from Canada and abroad. Without a doubt, live music has a solid history in Owen Sound. When considering her musical future however, many local musicians are turning to the recording studio.

Dave Chevalier has been recording music since his boyhood. His teeth were cut on a handheld cassette player in a room under the stairs of his childhood home. Says Dave – “When I was a teenager, getting a 4 track reel to reel was almost unattainable. Now kids can get access to recording gear that we never dreamt of. Now with digital, people are recording albums on phones. It’s amazing.”

While the gear may have changed, the game remains essentially unchanged. Artist composes dope tracks, records said dope tracks, crosses fingers, then sets an album loose on an increasingly saturated musical world. Intending to better the odds for artists from Grey and Bruce, Dave founded his label/studio Wiretone Records in 2018. “The real impetus for Wiretone is to take nascent artists from the area and get their music out there. To develop artists. A lot of the artists here seem to be caught here and they need to move across the country, maybe across the world.”

“Owen sound is thriving!
Lots of different kinds of music”

To his credit, Dave’s money has been put firmly where his mouth is. Wiretone boasts a purpose built, well equipped studio, a highly proficient design team and a growing roster of local talent. Two of his acts, thrash metallers Killing Clarence, and experimental Anishinaabe rocker Jake Chegahno (rest in power) have just released their first albums through Wiretone (Living Nightmare, and Buffalo, respectively). Says Dave of his departed friend Chegahno – “I want to get his music into the greater world, especially to the Aboriginal community across Canada … he was a really important songwriter and there’s something about his songs that really moves people.”

In addition to his desire to promulgate Chegahno’s musical legacy, Dave wishes to see Owen Sound develop into a serious destination for recording artists. He has lofty goals, and serious drive, but is also a realist. “To attract outside bands to come and record you really need residential studios. Places where the bands can come and stay and then be very close to where they’re recording. I don’t know that we have that yet.”

Thankfully some other local studios are already rising to the challenge.

Four years into serious studio work, Morgan Barrie, of Ninth Street Studios, has released three of his own albums, as well as collaborating with and recording the likes of Christina Martin, Matt Epp, and Isaac Murdoch. Asked what drew him to the recording side of music creation Morgan responds that he “really like[s] the production side. Starting with an idea and just building upon it. Building it into something beautiful that I really love.”

For Barrie, this approach extends beyond the editing bay. He intends to expand from his current home studio by designing and crafting a purpose built studio. “The plan is to take this” he gestures to his gear hoard, “and build a beautiful sounding room, no more than a 15 or 20 minute drive from Owen Sound. In this area there’s definitely studios, but there’s not a studio that everyone says ‘oh that room sounds amazing, they’ve got this gear, and this vibe’. That doesn’t exist right now. I’d like to change that.”

Asked why he’s chosen to stay close to the Sound he responds – “Owen Sound chose me. I’ve tried to live in other places in the world. Toronto, Squamish, Canmore. Nowhere felt like home. If you’re gonna be creative and comfortable it’s nice to do it at home.”

Not only does Barrie subsribe to this mantra, but so does Adam Ferri, who records many of the area’s best in his Big Bay Sound studio, including the Summerfolk Youth Discovery acts. The Mackenzie Music Studio in Owen Sound not only offers recording services, but also private vocal lessons care of Trevor and Tara Mackenzie.

This “no place like home” approach to recording is mirrored as well in the as-yet-unnamed home studio of Lisa Lobsinger and Paul Pfisterer. Relative newcomers to the area, Lisa (Broken Social Scene, Reverie Sound Revue, Laser) and Paul (The Beauties, Laser) bring with them a significant depth of experience, and they’re fully committed to the notion of the “residential studio”.

Says Paul – “We’re seeking to create the opportunity for people to come up and get away. I’ve always found the most enjoyable recording sessions are when you block everything else out and there’s no distractions.” Lisa – “We want it to feel super comfortable, and really homey too. The layers come off as soon as you make it [here], having that relaxation opens your brain up to creativity.”

Career musicians recently relocated from Toronto, Lisa and Paul have a great read on the musical potential of their adopted home. Lisa – “Owen Sound is thriving! Lots of different kinds of music. It’s really nice to see the amount of support that [locals] are giving to art in general.”

They cite the number of quality venues as a strong draw for touring musicians to visit the area. Paul – “There’s Heartwood, Desboro, Flesherton, Collingwood, Thornbury. There’s venues everywhere.” Lisa – “There’s a way for people to tour on this circuit.” And if that touring act should happen to stop in at Lisa and Paul’s studio for a mid tour recording session, while creative juices are in full supply, so much the better for everyone involved.

With an abundance of great sounding venues, talented acts and a supportive fanbase, the health of live music in this area is assured. Now Wiretone, Ninth Street, Lisa and Paul, Big Bay Sound and the Mackenzie Music Studio are eagerly carving out a reputation for the Owen Sound area as a recording destination.

Nashville of the North? Only time will tell.