Home Rrampt Articles If you build it, they will play: a visit to Jeff Woods’... 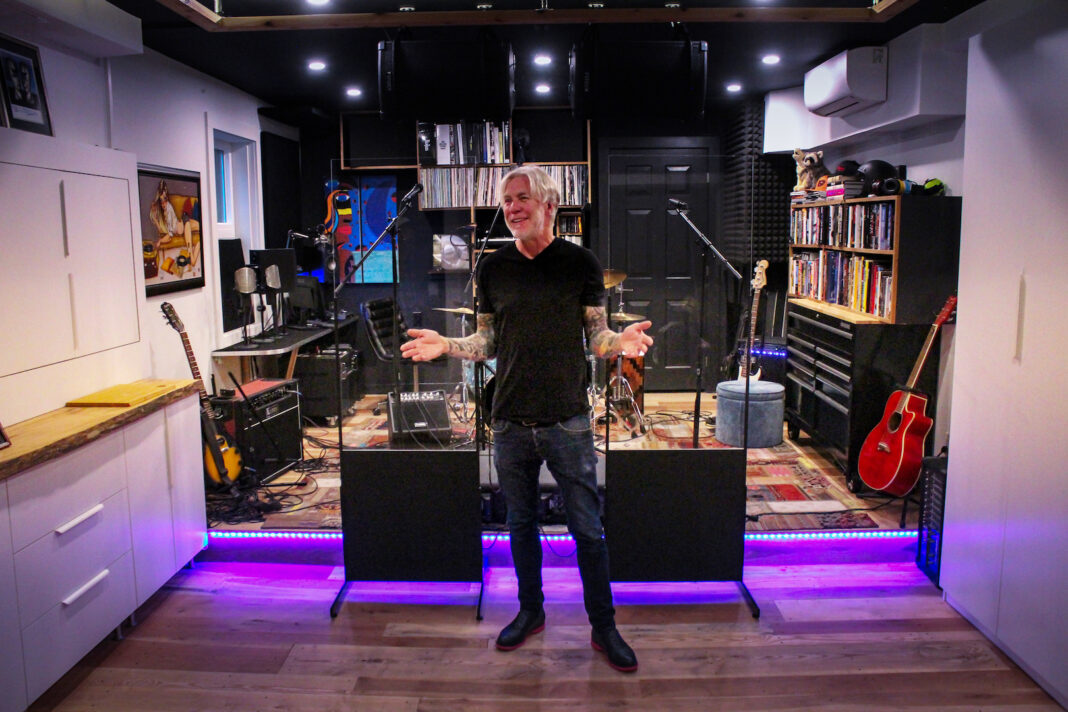 How do you interview a legendary interviewer? How do you talk music with a guy who’s met with everyone from The Rolling Stones to Eddie Vedder? A guy who’s produced and curated one of the coolest radio segments on the air for the past 17 years, written a killer book about his experiences, and been hosting a weekly podcast for years?

Well, you show up ready to listen, which is pretty easy actually – I’ve been tuning into his podcast for years and know he’s go some pretty cool stories up his sleeve. I do have a question or two for him, but I didn’t write them down. That seemed too prescribed, too inauthentic. I want a candid conversation with this iconic rock interviewer, a guy who’s made a name for himself in the industry, and a guy who’s got one of the smoothest voices in the biz.

But it’s not to say I didn’t prepare. I just don’t want to walk in with clipboard in hand looking like a poindexter. No, I came to chat. And to check out the cool digs he’s been working on over the past 12 months.

When I walk up to the Wild Woods Blued Performance Studio, I hear some serious drumming coming from the studio, and assume it’s Jeff Woods mid-session. I’m wrong. It turns out to be his stepdaughter rocking out to The Meters (a killer New Orleans funk band) while Jeff provides a beat once in a while to keep her rhythm on time.  He would later tell me that he bought the kit just as much for his step-daughter as for the studio.

His partner Anna answers the door and leads me into the new space off the side of the house; right away I know there’s been some serious thought and time put into this place. It feels comfortable and rustic with repurposed barn-board flooring planed to perfection, and vintage equipment from before I was born.

“I bought an old 1974 amplifier refurbished and I got an 80’s turntable,” he says as he shows me around. “I just wanted to have this room kind of vintage…I mean fuck, there’s an iPod there but that’s almost vintage now,” he says and laughs. When he was outfitting the space originally, he was asked if he wanted wireless-everything but opted against it. “I’m not that guy,” he says in his relaxed trademark voice.  “It’s easy,” referring to the old school approach. “It’s what I’m used to.”

He’s preparing for Mountain Head to play for a crowd of fifty, which is the allowed limit for a gathering at the time, and he shows me how the garage door opens to let the crowd spill out onto the driveway. I ask if he’s pulled the classic move of inviting his neighbours to avoid a potential noise complaint and he laughs and says yeah, of course, indicating the great relationship he and Anna have with their neighbours. “And they’re all music freaks,” he adds. They might even make it into the Youtube videos he’s planning for each performance, a series you can follow at Jeff Woods Radio. After Mountain Head, The Honeyrunners will play, followed by a podcast interview and performance from both Shane Cloutier and Mattie Leon.

As for the sound, he’s almost got it exactly where he wants it. “We recorded some of it last night and…the only thing left to do is… take some of the hard edges away.” He cites the number of records and books that outfit the space as being good for bass. It’s also great for aesthetics. His record collection sits right in behind the drum kit and is full of 60s Stones and Beatles. But he’s into the whole gambit when it comes to his vinyl collection. “I love Massive Attack and the fuckin’ Byrds….if I see a record that’s in good shape that’s not a million dollars, I’ll buy it  – if I love the band.”

As amazing as the studio looks now, it wasn’t that long ago that Wild Woods Blue  was just a typical garage that would house his gorgeous Indian Motorcycle along with a ton of other belongings. “This room was like boats hanging from here, ski bench there… it was just filled with shit.” But something clicked for him one fall day in 2019.

“I was like ‘this could make a pretty cool studio.’” He suggested it to Anna and she told him to go for it. So he did; because having a successful radio show, podcast, book, and audio career wasn’t enough. But it seems like this is where he wants to be. And who wouldn’t want to be living here with Georgian Bay on one side and the mountain on the other? Not only is this area beautiful, it’s buzzing with gifted people.

“The talent in this area – it’s as good as anywhere,” he says with full conviction. And he would know. He’s been interviewing local musicians for years on his podcast, Records & Rockstars, artists such as Drew McIvor, Miranda Journey, Shane Cloutier, and Samantha Martin to name a few.

I first ran into Woods at the CROW Bar and Variety (RIP) where he was a fixture for the popular Crow Sessions. I was in attendance to see Erin Costelo and Woods sat on stage with her beforehand like he was in his own living room asking her questions that were on point and relaxed. He was a total pro. I’m sure he’s missing those regular events, but his podcast is ready to get started again after a few months’ hiatus due to this nasty virus thing that’s been going around.

During my visit, he catches me staring at a picture of him with Keith Richards and makes a casual comment about Keith. It’s moments like this that remind me I’m in a different world here. If you’re a big music fan – and I am – he’s the guy to talk to in this neck of the woods. It’s as close as I’m ever going to get to people like Vedder, Richards, and Bowie, and it’s really cool to hear what they’re really like off-stage.

When our conversation inevitably turns to getting older, he tells me that no one is growing if they think they’ve arrived, which reminds him of something Mr Ziggy Stardust himself told him.

“Bowie said something really cool. He said ‘when you’re young (and I think he meant until you’re 50), you’re always becoming. One day, you actually have become.’”

Woods seems like a guy who has already arrived, but I know he’d likely say he’s still growing. When I ask him when he realized he was a gifted interviewer, he deflects and says he still doesn’t think he’s there yet, that he’s still learning, or becoming as Bowie would put it. Either way, he seems very comfortable with where he’s at and very excited for the new brand he’s developed. His laid back attitude comes through in his new Wild Woods Blue logo with blue water below a pine tree landscape in front of a red sunset sky. It’s the kind of scene you can picture him riding alongside on his motorcycle.

There was one question I did want to ask before I left and that was whether he still gets nervous. I wanted to know if this interviewing thing ever gets easier.

“I think you want to get a little nervous,” he says. “In anything, a little bit of nerves isn’t bad. My view became, ‘this is another conversation with someone who I will see again, hopefully. So let’s have a conversation about what’s going in your head right now.’”

Well said. I think I came away with a good sense of what’s in Jeff Woods’ head right now – his new studio space is definitely front-of-mind for him. Not only for all the great bands he’s going to host and interview there when it’s safe to do so again, but equally as a place where he can kick back and teach his step-daughter to play drums. 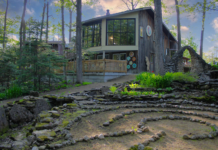 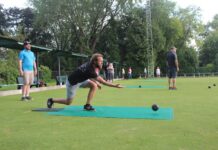