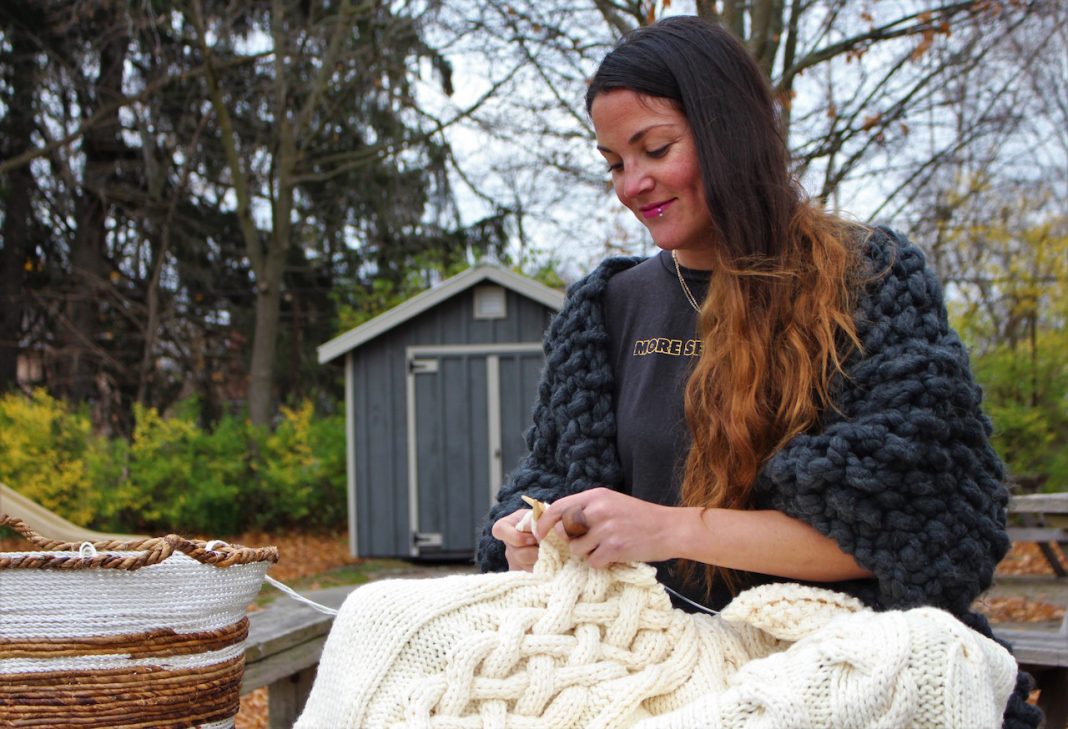 Once upon a time, the words knitting and crochet conjured images of serene grannies clacking their needles in rocking chairs. You still might get flashbacks of gaudy afghans with clashing colours or horribly itchy sweaters passed down through generations of unsuspecting children. Yarn crafts have obviously been around for ages, but they’ve mostly been considered practical, rather than trendy (I’m choosing to ignore the surge of crocheted fashion that got out of hand in the 70s, because… well, just Google it). Over the past few years, though, “handmade” has become a mark of value and outdated notions are now falling by the wayside as more young folks take up needles and hooks, and find new meaning in old artistry.

Everyone has their own story about how they got started with knitting or crochet in the first place. Many learned the skill in childhood or adolescence, and returned to it as adults, while others got into the habit out of sheer curiosity and with no prior experience. But what exactly is the appeal of returning to these traditions? For some, the repetitive movements are calming and therapeutic, and it’s a way to be productive even in the midst of a Netflix binge. A resounding sentiment, though, is the appreciation for the sense of connectedness found through knitting and crochet.

Fibre artist, Anne-Marie Hay, works in a multitude of media, but knitting remains close to her heart as a link to her heritage. “Many people learn to knit through familial connections, just as I did. The yarn I am holding feels like a string that is woven through my family tree, connecting me to the women in my ancestry.” Her partner, Cody Hawes, also notes that her own knitting skills didn’t really take off until she met Hay, who helped her with problem-solving snags and solidifying her technique.

Crochet artist, Shawna Katz, recognizes how important the inherent social components of crochet and knitting are, both for the learning process and for ongoing innovation. “When I first was crocheting…there wasn’t the community there, there weren’t other people creating what I wanted to make. So, I had to make up my own patterns if I wanted to make it at all.” Katz now owns a creative crochet business, Uniquely Handcrafted, and is an employee of Riverside Yarns, Owen Sound’s local yarn shop. Often finding inspiration through commissioned pieces, she enjoys the challenge of designing new items – especially obscure requests – and takes pride in sharing her patterns with other crafters.

There are also those who see an opportunity to redefine traditional ideals through the art of knitting and crochet. Rachel Paterson looks back on her first experiences with knitting when she was volunteering with a seniors’ program. In an effort to get her away from the men’s Euchre table and instil more ‘feminine’ tendencies in her, a group of women badgered Paterson into taking up the craft. “They kept teasing me that I wasn’t a real woman until I learned how to knit and said they learned by whittling their first knitting needles and insisted I did the same.” As tough an approach as it was, she discovered a knack for making and chose to embrace it on her own terms, even starting up her own knitting business and helping others to learn the craft.

As Paterson’s story demonstrates, knitting and crochet have traditionally fallen under the realm of women’s domestic work. We’re making progress in breaking down binary views on gender, but much of our society continues to perpetuate gender roles and stereotypes. So, for some, the act of knitting or crocheting has become a social and political statement, a way of reclaiming skills and pushing back against convention.

This movement to contemporize yarn work also extends to the push toward ecological and sustainable living. It’s in line with favouring handmade over mass-manufactured products and aiming to reduce carbon footprints through conscious use of materials. This pattern has been noticed by Cathy Den Tandt, who co-owns Riverside Yarns with Josette deBrouwer. “[Younger people] are much more aware of the larger picture of the product and where they fit in with the product,” explains Den Tandt. This means purchasing yarn for specific projects rather than building up a stash, and also seeking eco-friendly materials.

As the heart of the Owen Sound yarn community, Den Tandt and deBrouwer keep the shop filled to the brim with an ever-growing selection of luscious skeins – sheep, alpaca, acrylics, linens, and silks, plus an assortment of recycled and locally-produced fibres. It’s as much a feast for the senses as it is for the soul.

If you find yourself itching for connection and creativity, there’s no time like the present to join the maker movement. Check out Riverside’s Tuesday evening knitting and crochet Zoom group, which deBrouwer runs free of charge. Whether you tend toward practical or whimsical, inspiration is endless with yarn crafts, and you might just surprise yourself with a new-found love. These are definitely habits you want to get hooked on.