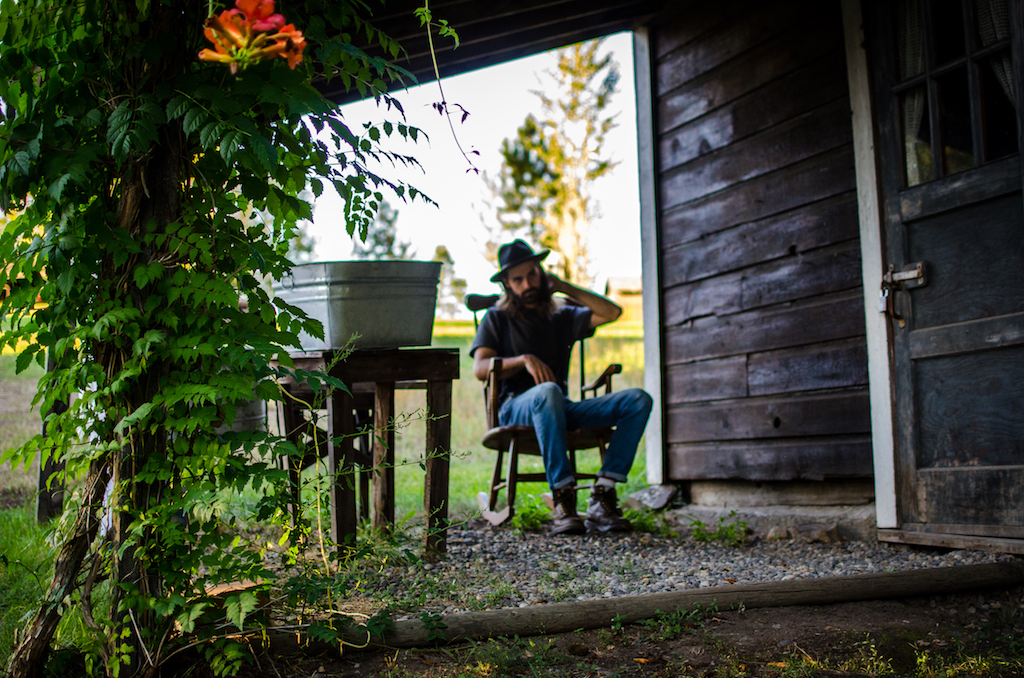 Like a true folk troubadour, Bran Sanders considers himself to be semi-nomadic, having wandered across Canada for years with a guitar on his back and a tune in his head. At least he did until Covid hit and he was forced to sit still for awhile. But in the time leading up to his recent album, This Old House, he often traveled between his home province of Ontario and British Columbia, where he now currently resides in the town of Westbank. Sanders grew up outside of Owen Sound and was originally planning to play Heartwood Hall in January to celebrate the new album (we’re hoping it gets rescheduled for a date in 2021).

It was this life that led Sanders down a path of old time folk music in the tradition of greats like Dave Van Ronk and Doc Watson. This world can always use a little more Van Ronk in my opinion, a vastly under-recognized musician of the 20th century, and one that has his fingerprint on this recent collection that is two thirds traditional folk songs and one third originals.

In his travels, Bran has garnered attention during his live performances with thoughtfully told stories backed by catchy, well delivered songs. This Old House was just released in November 2020 and signals the beginning of a talented folk artist’s career, one who not only breathes new life into traditional oldies, but writes captivating folk songs of his own. Sparrow is a standout on this album with strong imagery and a beautiful chorus backed by sparse guitar picking and haunting violin care of Charlotte Germaine. This is an example of how Sanders demonstrates the power that can come with simplicity and space.

It’s the folk classic Red Rocking Chair that Sanders opens the album with and sets the tone for the collection: traditional and true; timeless and captivating. Bran reimagines these old tunes by combining curiosity with experience, while the theme of his music remains constant: life can be ambiguous, complicated, and intimidating.

Let It Go is the first of three originals and in Van Ronk fashion, he describes these complicated realities of life as a musician in smooth deliveries like  “I’ll rest my head/ and I’ll rest my bones” and a chorus line that’s as close to Van Ronk’s growling voice as Sanders gets on this album: “Isn’t it the way that it goes /we hold on so long/ untie the knot and let it go.”

Hills of Mexico is another old banjo tune that Sanders breathes some life into by picking up the tempo and adding a relaxed strumming style and precise harmonica. With Little Maggie, Sanders goes in the opposite direction and slows it down to create a more sombre ode to the young enigmatic woman; he uses an evocative guitar riff to ensure a signature rendition.

Moonshiner is a traditional tune about well…moonshine and how it’ll take all your money if you’re not careful. A universal truth that could be applied to many vices. “If the moonshine don’t kill me/ I don’t know what will” is a throwback to the 1930s but is eerily relevant in 2020.

The B side kicks off with more of Sanders’ original tunes. Welcome Back opens with some upbeat whistling in traditional fashion and spells out his nomadic tendencies in its storied verses, explaining the effect his lifestyle can have on relationships. Alongside Sparrow, this is an example of talented songwriting his predecessors would be proud of.

Roving Gambler is classic folk song first recorded in the 1920s and since covered by artists such as Pete Seeger, Dylan, and Norah Jones. It’s had many incarnations over the last 100 years and finds a suitable place on this collection as does the well-known I’ve Been All Around This World, made popular by the Coen brothers’ Inside Llewyn Davis.

By the end of this effort it’s clear that Sanders has infused his view of life into the album, both through his own lyrics and the selection of songs. You get a sense that he’s found a home in the land of traditional folk music and he’s very comfortable here. He understands the roots and he’s planting his own tree in the forest where figures like Watson, Van Ronk, and Seeger tower.

Craig Smith had his hands on mixing and mastering this album, and even had time to play percussion on Hills of Mexico. Charlotte Germaine provides the violin on a couple tunes, but other than that, Sanders covers it all – vocals, guitar, harmonica and banjo.

This is a relaxing and fun album to listen to while you’re lying around the house this winter. It’s a good one for the whole family. If you’ve got kids, maybe it’s time they understood where much of today’s music comes from. Traditional folk has definitely had its impact on current popular music. I mean, have you listened to Taylor Swift’s last couple albums?