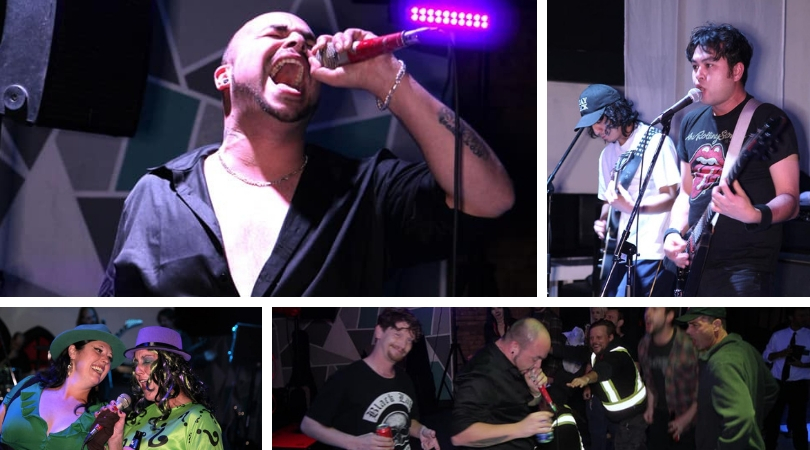 Considering we host one of Canadas’s premier folk festivals, and have one of the most beautiful live venues anywhere in Heartwood Hall, you might sound like a spoiled brat for noticing that most of the acts who grace our local stages have a tendency to be…weirdly lacking in volume?

Luckily, a group of local metalheads has quietly built an emerging community of heavy music that is giving fans an alternative to the indie-folk intensive, Blundstones-and-craft-beer atmosphere that local live music fans have grown accustomed to. At the centre of this scene is Killing Clarence.

Formed from the ashes of their former act, Shadows Bright, Killing Clarence is the creation of the three Webster brothers: Harley and Jake, who handle guitar duties, drummer Jeff, and rounded out by bassist Mike Bloomfield and Ray King on vocals.

Frontman King’s Banding Together Promotions – which started out with a charity concert in North Bay, and grew when he raised 12K for OS arson survivors (together with the United Way) – has worked to establish the H20 Lounge as a new venue for heavy acts that otherwise would not have a place to play. He was contacted by the bar’s new management to change its image from the dance club it started out as to a venue that would serve a market of music fan that had been neglected in town so far.

At the band’s annual ‘Heavy Halloween’ show, metalheads chugged $4 beers in Freddy Kruger masks while pro wrestling played on an enormous screen. A dude dressed as a giant shitter won the costume contest. Killing time between sets consisted of guessing what animals the collection of bones scattered in front of the stage (some of which still had flesh on them) came from. Better than the usual small-talk you have to endure at most shows. Oh yeah, and the music kicked ass.

Hometown openers Kill-Devil started the show, tearing through a short set that incorporated elements of 80s punk and a touch of 90s-era alternative into their nu-metal sound. It was easy to see how they will be the perfect opening act for punk rock legends the Dayglo Abortions when they come to town in a few weeks.

Next up was Toronto’s Nervcast. Their year-old 4-song EP ‘Locked and Loaded’ is full of classic rock riffery that has made the band regulars at Queen St. institution the Bovine Sex Club. These tunes translated perfectly to the band’s live act, with short, seconds-long breaks dividing their smooth-running set.

From the moment Killing Clarence took the stage, the night took on a party-ready turn. Well-oiled fans who had previously been playing pool or hanging around the horseshoe-shaped bar near the door gathered close to the stage. The band treated them to two sets of traditional and thrash metal, featuring double-time breaks a la Kill ‘Em All, and dual guitar solos that wouldn’t be out of place on an Iron Maiden album. King spent most of the set in front of the stage, circulating through the crowd with a tall boy in hand, while the rest of the band played with a near-telepathic tightness that only a literal band of brothers could pull off. With their proficient combination of metal styles, Killing Clarence has the strange distinction of being a band that sounds like other bands, but definitely not any other band around here.

Perhaps that’s exactly what the local scene needs – a band whose non-compromising approach to music speaks to metal fandom itself rather than any sort of self-serving notion of celebrity. In an era where making an Instagram profile often precedes a first band practice, Killing Clarence are an anomaly. Their social media presence is sparse, and they don’t have music on Spotify. Considering the hours and hours and hours of practice it takes to create music so technical, and to play it so effortlessly live, it’s amazing how the hunger for recognition seems lost on the band – and may explain why there were several fans in attendance who showed up solo, coming because it was a metal show rather than to support any band in particular.

It is easy to see how, with the gamut of softer music reaching levels of saturation, the pendulum of rock fandom may be swinging in the direction of Killing Clarence. In the midst of recording their debut album, and with a series of wintertime shows around the province taking shape, it’s going to be difficult for them to stay under the radar much longer.

11 Rooms is all about connection and creativity