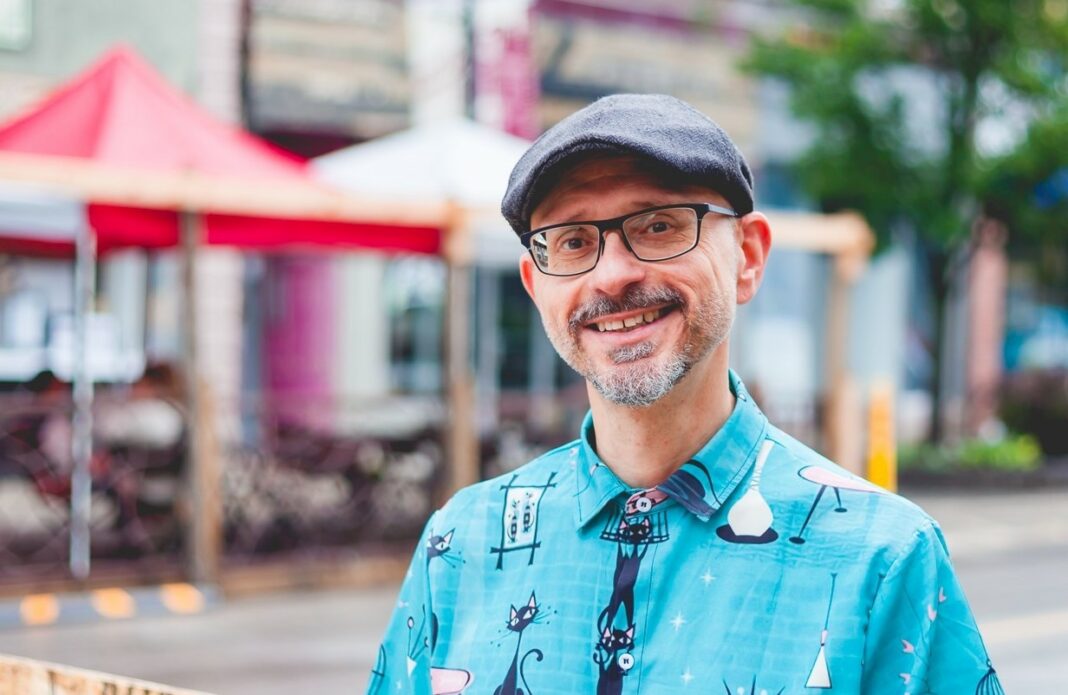 “Now, there are a couple of things that I would like you to know before we begin…”

I’m sitting across from Richard-Yves Sitoski, Poet Laureate of Owen Sound, at the Palette Café downtown, and we’re on the precipice of what is bound to be a whirlwind interview. I brace myself for his disclaimer.

“I’m human. /My ammo is live. /And I fall in love like it’s an ocean. Or a dumpster. /I make love according to packaged directions. /I make friends like left turns on red lights /and I lose them like guitar picks…”

He launches full-tilt into his poem Things You Should Know Before We Begin and I’m captive to the words spinning circles around us. He tends to have that effect when he performs. Sitoski is a born poet, so it’s surprising that he only began to dabble in the medium in 2010 after inspiration struck at a music and poetry coffee house. Not one to approach art with trepidation, Sitoski jumped head first into this newfound passion and has been making waves ever since.

Now, I could go into detail about his published works – which include three books of verse, a CD of spoken word poetry, and a heck of a lot of pieces in literary publications such as Barren Magazine and Bywords.ca – but you really should experience Sitoski’s writing for yourself to get the full impact. There’s good reason he won the 2015 Owen Sound Cultural Award for Emerging Artist, was selected as the city’s Poet Laureate for 2019-2022, and most recently, received the 2021 John Newlove Poetry Award. The prestigious national award also offered Sitoski an appearance at the Ottawa International Writers Festival and the opportunity to publish a chapbook. Keep your eyes peeled for unbrokenenglish, due out in late October, 2022!

“I sleep like there’s no tomorrow. /I eat as a form of entertainment. /I’m a migrant worker in the state of happiness. /Among the saved I shuffle cloven hooves…”

We sip our coffees as punctuation for the conversation, dark-roast respite between tangents running through everything from optimistic nihilism and the human condition to the secret language of underground fungal networks. Oh yes. Sitoski upholds the traditions that come with being an artist, and a public figure at that, but his style is entirely his own and he’s infused his Laureateship with an unexpected and evocative edge.

“Wherever the material takes me, that’s where I’ll go with it.” Sometimes it will lead to written pieces, other times to performance, spoken-word pieces. And it just so happened that one stroke of inspiration even led him to vermicomposting. If you’re having a hard time connecting poetry with the process of using worms to turn food scraps into soil, don’t worry, Sitoski lays it all out for you in his second Legacy Project as Poet Laureate, WormWords. It celebrates worms and vermicomposting by putting poems onto paper and then shredding the paper and adding it in with the worms.

“And the worms would take those poems, the poems that were shredded in the worm beds, and then digest them, turn them into mulch, and then [the digested poems would] be given to the plants. So, it’s actually turning my poetry into something useful for a change!” Cheeky as Sitoski is, the work also speaks to his fascination with “the brevity of human life and how quickly things can change, and how we’re all part of this cycle of transformation.” And with his Laureateship focused primarily on climate and environmental action, he hopes to highlight vermicomposting as an accessible and sustainable way to reduce the burden caused by soil depletion. The whole project was documented and compiled into a book by local artist, Kari Bronaugh, and is available for your exploration at the Owen Sound and North Grey Union Public Library.

“My smile is an audition for a bit part in your memoirs. /I go down in flames to give you light to read by…”

As if poetry for worms isn’t rad enough, Sitoski lets me in on another project he has on the go: an artist-proclaimed “garbage opera” entitled Wide Awake in Eden. It’s a follow-up to his first Legacy Project, No Sleep ‘til Eden, which is a book of poems that take the reader through climate issues, and interspersed with augmented reality visuals and audio by KP9 Interactive, to boot. (If you haven’t yet read No Sleep ‘til Eden, get yourself down to the Ginger Press and pick up a copy!) Inspired by the Owen Sound Waste Watchers and the United States’ Young People’s Poet Laureate, Naomi Shihab Nye, Wide Awake in Eden is a social-environmental commentary told through poetry, song, audio collage, and visuals.

What’s the secret to his growing success and ever-evolving innovation? In short, work. A lot of work. “Writing chose me, but if I was going to choose to follow writing, then I’d have to make up my mind about it and agree to let writing tell me what it needed from me.” This dedication to writing also comes with continuous research of poetry, because “you cannot – CANNOT – write this stuff unless you read this stuff. Unless you are aware of what other people are doing, of what’s possible and what’s not possible.”

While many artists struggle to find the balance between day jobs and their craft, Sitoski considers himself fortunate to receive ODSP, which allows him to pursue full-time writing and advocacy through art. “I don’t view it as a free handout – because it’s not. If anything, I look at it like it’s my permanent writer’s grant, my permanent arts grant.” And with those benefits, he in turn works to enact change through creativity.

“What I’ve forgotten would have made me wise. /My birth was an act of plagiarism. /I intend to fit my coffin perfectly…”

“As poets, we don’t have the same clout as a journalist would… But at the same time, somebody has to speak up for the issues – however you define the issues. They could be social, political, economic issues, they could be cultural issues… As an artist… especially as a public artist, as a Laureate, you are the type of artist who has to be very conscious about the society that you’re living in… From the broadest to the most local, like it or not, you are a nexus point for all these things.”

This mindset is exactly what makes Sitoski such a powerful Laureate. Despite countless pandemic curveballs, he’s kept people connected through his Oh!Sound Reading Series, a regular virtual event that features renowned poets and offers a spoken word open mic for attendees. He’s also an avid public performer and keynote speaker and is always looking for new opportunities to present – an integral role of the Owen Sound Poet Laureate.

“I’m a preamble longer than the joke, /backstory patter that telegraphs the punchline…”

Being attuned to society and the myriad issues at hand these days, Sitoski knows that he has his work cut out for him when it comes to shifting mindsets and inciting lasting change. So how to keep from falling into that pit of existential despair? Blind-faith optimism, the belief that, as dire as the state of the world seems now, things can and will get better. No effort is too small; picking up a few pieces of garbage won’t change global warming, but it does make the community more livable for others.

“Even if [the state of the world is] too bad and we fucked up too much and we can’t fix it, I would still rather die trying, just to make life better for maybe one or two more people if I can, than just give up entirely. I don’t think you need to be an optimist to do that. You just have to see that good still exists and that you can be a source of good… and that it’s not a naïve thing.”

“Which reminds me. Have I told you about the time I…?”

To stay up to date on all of Sitoski’s Poet Laureate happenings, follow him on Facebook @OSPoetLaureate2019to2022 or Twitter @r_sitoski. You can also find more of Sitoski’s work on his website, https://www.rsitoski.com , and his contact info if you’re interested in having him speak at a local event, whether for public or private ceremonies, AGMs, meetings, or get-togethers