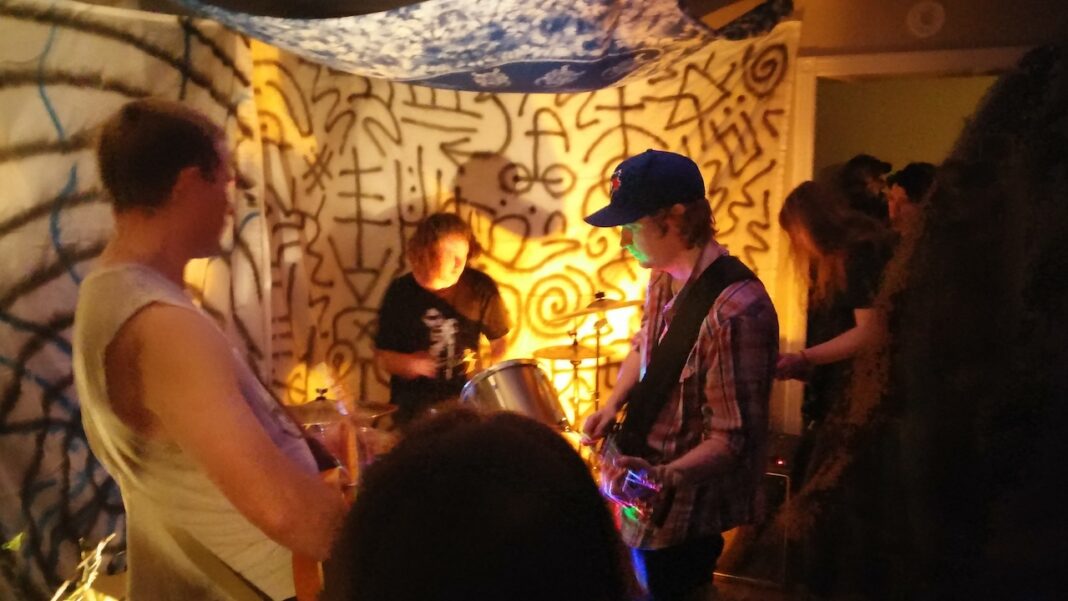 Dynamics in music can be tricky. Sure, cranking your amplifier to 10 and feeling your entire body quake can be pretty exhilarating, but when you play at 2 or even 0 for a while, 10 hits with an even heavier impact.

That’s exactly the case with Psychedelic Dirt, a quartet separated by a few provinces but who make a racket loud enough for everyone coast-to-coast (and beyond) to hear. After a few years of quiet, the group is back with their new album Set To Ride.

Kevin Griffin and Michael Snider reside in Owen Sound and have been playing music together for close to 20 years in bands such as Crops, where they smashed preconceived notions on how to play an instrument. The other half of the group, Jeremy Van Wyck and Isabel Ford, currently calls Nanaimo B.C. home. Formed in 2015, the band was most active from 2015-2017 touring around Canada and releasing multiple cassettes and CDs.

Side projects and personal lives put the band on hiatus for a few years, but they’re making some serious noise again with Set To Ride a completely improvised, live off the floor recording.

Right away the noisier tendencies of Psychedelic Dirt are on display. Everyday kicks off with some humming feedback and metallic cymbal scrapes, a feeling out process that converges somewhere between free-jazz and no-wave before finding its pace. Snider and Griffin mellow out their guitars, one playing a repetitive riff and the other dancing around the part using delay that switches between tasteful and chaotic, all driven by Ford’s bassline that’s as warm as it is hypnotic!

Van Wyck has sat out the last few minutes allowing some tension to build, sometimes it’s about what a musician isn’t playing. When he does join in it’s flawlessly executed and doesn’t derail his bandmates…if anything it gives the guitars a chance to cut loose into a beautiful hazy, stoner rock solo.

The album’s title track Set To Ride is almost too heavy to be contained, imagine listening to Dick Dale through a busted speaker on a turntable with a loose belt all while having a bad acid trip. The reverb-tinged guitars of Snider and Griffin duke it out between droning chords that dissolve into feedback and a harsh chromatic riff while the rhythm section maintains heavy hands throughout, making you wonder what their instruments did to piss them off! The whole band is dialed in and playing so loud you can almost hear the walls of their jam space shaking.

Solvents kicks off with some hallucinogenic delay-pedal trickery until the rhythm section wrangles it in like an expert rancher with a lasso, but this is a beast that won’t go down without a fight. One guitar continues strumming like a heartbeat during a panic attack while the other rides the line between music and noise. “Letting go, letting go, letting go” is repeated until the feedback seizes and we’re treated to a driving riff that completely changes the flow of the song. It builds and builds until it stumbles its way into metal territory with a short lived breakdown that has the tune splitting at the seams!

Set To Ride concludes with a slightly different look at Psychedelic Dirt. A bit more laid back than the rest of the album, The Whole, offers a looser take, a seemingly more straight-forward jam that still contains some of the elements we’ve heard so far. A mellow chord progression is prominent throughout the song, really setting the mood for the second guitar to incorporate some solos that don’t quite reach the intensity of previous songs…at least for now!

“The Whole” sees the rhythm section taking charge and picking up the pace, Ford furiously picking her bass while Van Wyck bullies the drums forcing Snider and Griffin to break from the main progression and try to keep up! After a few minutes of reckless abandon, the quartet find their way back to mellow riff to beautifully close out the album.

While we may not know how long it’ll be before Psychedelic Dirt is set to ride again, I’ve been told there’s enough jams locked away in the vault for future releases and we may even see some older material get the vinyl treatment. You can keep up with Kevin Griffin and Michael Snider through OwnSound Recordings, a DIY label that focuses on (mostly) improvised and experimental recordings available through a bandcamp page or the odd cassette release.

Jeremy Van Wyck and Isabel Ford have stayed busy operating Wyrd Wealth (check them out on Instagram), a specially curated shop that focuses on community, dealing in records, books, clothing, and whatever else is awesome in their current home base of Nanaimo.