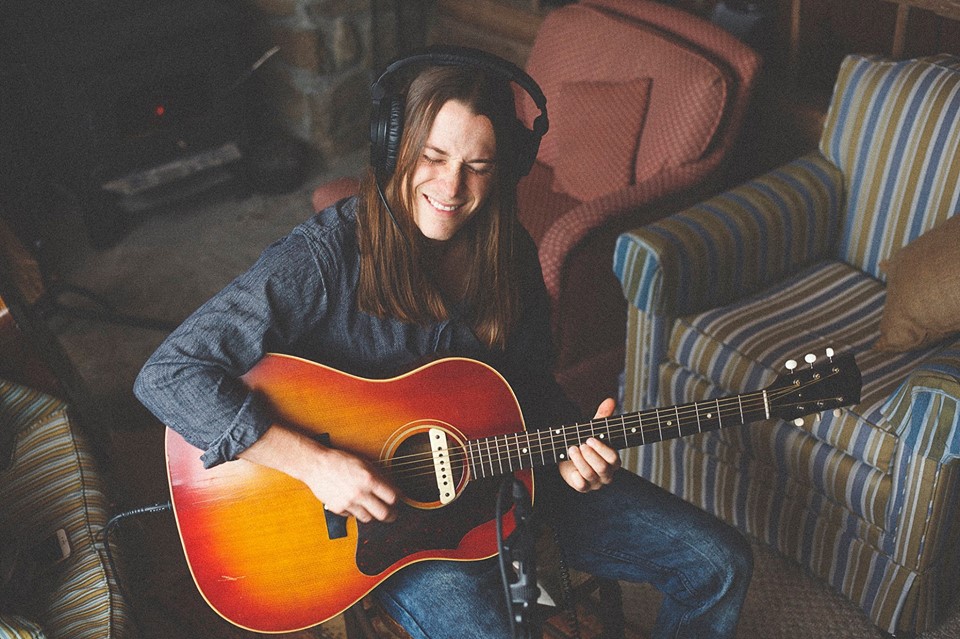 If you live in Grey/Bruce/Simcoe, and have left your house for a restaurant, bar, or open mic in the past few years, it is almost certain you’ve seen Jayden Grahlman play. He’s been gigging since he was fifteen, and difficult to miss with his long mane and wide smile, guitar wrapped around him like a comfortable piece of clothing.

And he makes reference to his contented countenance on his debut albumDiving In. “I’m grinning from ear to ear” he sings on I Can’t Wait to Kiss Your Face, one of the fun, funky grooves on his new record, which drops June 28 with a celebratory performance at Owen Sound’s Heartwood Hall.

It’s clear that playing music makes him happy, but it’s even more clear on this effort that his partner is a significant reason for his bliss, a woman for whom he croons later in the song: “Its been so long since I’ve felt your fingers/ running up and down my spine/ you got that red dress on and I let it linger/ in a picture in my mind”

Simply put, this is an album for lovers and Grahlman seems to have a wonderful muse, “An angel [who] fell from the highest cloud”, who inspired lines such as “your heart is an ocean and I’m diving in” and has the opening song dedicated to her ‘magnetic’ qualities.

If you’ve recently been through a break up and need the soothing sounds of minor chords, you’ll only find solace in the reflective, Give Thanks, an alt-country, folk number with a beautiful slide guitar and James Taylor lyrical tenderness about navigating the troubled times we live in.

Instead the album is overflowing with positivity in the figurative forms of water, the cosmos, heaven and highways. He professes his gratitude for life’s blessings in simple, yet convincing ways. You can’t help but get inspired when you realize you’re also smiling from ear to ear at the infectious grooves and cheerful vocals.

Grahlman’s lyrics might be full of playful platitudes about love and happiness, but his guitar chops are serious and uniquely his own. The guitar is especially noticeable on Stars, You Got the Power, and the title track, Diving In.

The central themes are love and gratitude, but the album is a melting pot of sounds that have influenced Grahlman over a lifetime of musicianship. He’s blended an early love of hip-hop with more recent passions for bluegrass, funk, blues and jam bands. The album kicks off with an enthusiastic ode to his muse with a bridge that would fit nicely on any post -2005 Dave Matthews Band album. Jayden’s jam band roots are evident right away, as is his blues background. “I can’t help myself/ You pull me like the tide/ When the moon is shining/ The water’s gonna rise” he sings on Magnet.

The title track extends the water metaphor into a conceit that imagines ripples, mermaids, and waves set to references of true companionship. He adds a few ingredients from G Love and Special Sauce on Soul Highway, a  song that asks his partner to “strike a match babe, we’ll drive into the flames”

The best he’s at lyrically is when he’s freestyling on the album moving swiftly between syllables and deftly between metaphors. It reveals his penchant for hip-hop, albeit a youthful penchant that was later replaced by other genres.

The blues shows up strongly on You Got the Power, a relaxed, guitar-driven tune on empowering yourself to make positive changes. “A young man looking for a shaman wants his wounds to heal/ but there ain’t nothing stopping you son if you want to know what’s real/ you got the power and you know what to do”. It reinforces David Foster Wallace’s message on This Is Water that you’ve got the power to choose how you think about things.

Stars crosses his penchant for funk with a Phish sound that shows up from time to time on this album. Fishbowl World is a playful bluegrass number where Grahlman’s “all alone in a bowl of dirty water.” The album closes on the slow, bluesy Angel that showcases his depth lyrically and vocally, and a fitting conclusion to an album that has you up in the clouds for most of it. There are a few that bring you down to earth and this is one of them.

Grahlman’s become an integral part of the music scene in the Georgian Bay area and you may have seen him play with Higher Funktion or lead the open mic series at The Barn Cooperative. He’s played the Huron Club, CROW Bar, Desboro Hall, The Bruce Wine Bar, and Ted’s Range Road Diner, to name a few, but to hear the debut of Diving In, you’ll have to go to Heartwood Hall on June 28 around 8pm . He’ll be there with a group of talented friends to test these songs out live.

So grab a Kilannan Kolsch from the bar, snag a table and settle in for the night – you might find yourself smiling as much as he does, but that’s not very likely. He’ll be doing what makes him happiest – playing his tunes in a supportive community of friends and music lovers . What’s not uplifting about that?