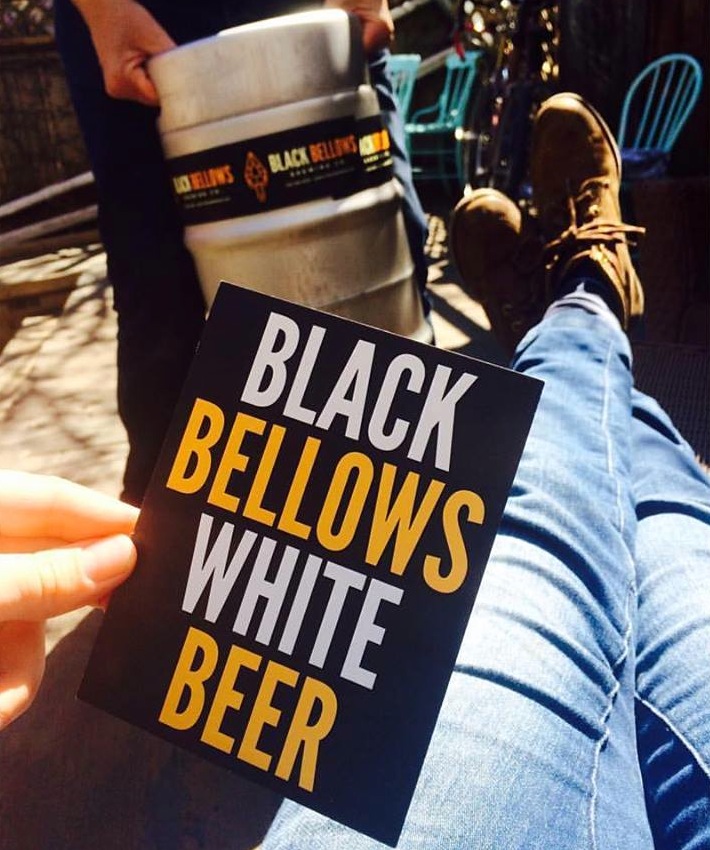 Halfway through my conversation with Peter Braul of Collingwood’s Black Bellows Brewing Company, a couple behind us overhears him mention Kincardine and asks if he knows Darrin Maki, to which a conversation spawns regarding university roommates and how long it’s been since they’ve seen him. It seems that wherever you go in Grey/Bruce/Simcoe and no matter how big some areas like Collingwood are growing, it is all still a web of connections. We are all only a few degrees away from each other and that’s what makes this area so cool and unique. Peter grew up in Kincardine, and like many of us, left the province for years before returning home to South Georgian Bay/Huron, where there are a lot of exciting things happening, and Black Bellows Brewing Company (BBBC) is one of them.

It seems that Peter and I are connected in much the same way he is to the couple behind us. His friend and business partner, Scott Brown, has a sister who I’d met over this past year and was the catalyst for setting up the interview. And making connections in this area is important to Black Bellows, and to Peter. “Being young and in a small town you just start to appreciate those places where people can come together” he says between sips of White, a beer his Brewing Company makes and is on tap at the Bent Taco where we’re meeting. It’s one of more than 50 places that carry the Belgian Witbier.

“We want to keep building momentum of this culture in this region in Ontario. It’s already a tourist destination…and I think there are enough people that are looking for unique experiences and we can offer that” he says about he and Scott’s plans to open a space that can offer more than just a factory setting – a place that can host events like the one they recently sponsored in Owen Sound, Rrampt’s very own Lebowskifest. I knew that anyone who was willing to take some time out of their busy schedules to dress up as the Dude and come bowling for a night was the kind of person we needed to sit down with.

So, I met with Peter for a sunny patio beer in Collingwood to discuss their adventures in starting a local craft brewery and about the culture they hope to create in this area.

So tell me about all these vans you guys are destroying? How many have you killed so far?
Two…officially. I just put that up there [on the website] because when we reflect on this past year, a disproportionate amount of time was spent looking for different vans, purchasing them, repairing, dealing with….when thing goes wrong. We actually stopped using our own van. We got this rental van from this place in Stayner. Shout out to Lafrienere Auto. And now I don’t have to worry about it breaking down.

I’ve really got an appreciation for professional delivery people at this point because I’ve been doing that. Scott was doing that before he had twins, but now it’s me because I only have one baby.

What was the first beer you remember drinking that you thought ‘shit this is good’?
I didn’t even drink beer when I was young. I remember being in Kincardine underage, and I always looked older so I’d be the one buying beer. I remember thinking ‘why would anyone drink this? All of the options aren’t good’

I used to tree plant on the west coast for awhile, so I would spend time in Vancouver drinking those West Coast IPAs, but I don’t even know if I liked them…they were extreme hoppy beers. They were like assaults. I really loved Belgian beers of all the ones I tried.

How did Black Bellows start? What was the catalyst?
Well, Scott and I have known each other for over 20 years. We grew up in Kincardine and…when we left, we made a tradition of getting together for a week in the summer to go on a canoe trip. We were on one of these trips and we were asking each other – ‘what’s going on with your life? You like what’s happening? You want to keep doing what you’re doing? Why don’t we do something together?’

I started thinking: well someone does this [brewing beer], and if you think it’s interesting, why don’t you do it. Start from the assumption that there’s always a way to do something and work backwards from that.

I started brewing out in B.C. with a friend of mine…and in Quebec where I was living, there’s a huge beer culture. Just a different appreciation for styles. Like the French influence is there and the Belgian influence. I learned to really love beer there. I mean you could go to the depp [corner store in Quebec] and each one has 4 or 5 pretty good Blanches. It’s a really tasty, chuggable kind of beer so it’s surprising that when you come to Ontario there isn’t one that anybody makes year round except for us. We’re still the only people who make a Belgian style wheat beer on a regular basis.

Another key ingredient was that in Collingwood we’ve got a number of other breweries who have started up. The Collingwood Brewery was here which made it possible for us. There’s a real culture right now that makes it possible to do something in craft brewing. There’s the belief that the more the merrier. I think it’s more a growth idea, a prolific sharing of ideas.

Ya, the more that Collingwood gets put on the map, the more that everyone benefits. And you guys collaborated with Northwinds for one beer. Is that something you’re going to do again?
The collab thing with Northwinds was really excellent. It felt good to be part of the Collingwood brewing community. Also, every brewery brings something. Even though we don’t have a brew space, we use special yeast so it’s something we can offer. We’ve got unique yeast that we use and we can offer to share with other breweries. So that’s how that collab came about; we were at Northwinds I was talking to Macleans about our hops and the brewer at Northwinds approached me and said why don’t we do something together.

What are some obstacles you guys have encountered or are still encountering?
With every new business, you have this complicated model of how it’s going to work. It’s always completely wrong, and I don’t think that’s special to us. But it’s wrong in good ways and it’s wrong in bad ways. I guess we didn’t understand that the LCBO is so can-oriented. It’s funny how Canada is with alcohol, how each province is very different. When you go to B.C…the dominant format is the 660 ml bottle, the bomber. People are trying, but you can’t sell a bomber here or even a 500 ml bottle. That won’t fly. The 473 ml can – that is off the charts here.

In terms of the actual beer, when we were making the actual test batches 20L at a time, we’d be upp-ing the spices because in this beer we’ve got key lime, Seville orange, elderflower and coriander so we toy with the ratios of those things and how much to put in. When we first went to order, we’re like ‘let’s make 6000 litres of this then’ and then it was just a shock to try to find where you can buy that much elderflower at once. How do get 18 kilos of elderflower? So we’ve had to find the sources for weird stuff, but that’s part of the fun.

So you guys sponsored Rrampt’s first annual Lebowskifest, is that something you want to do more of – sponsoring cultural events in the area? (and yes, Lebowskifest is a cultural event).
Definitely yes! Being a new business it’s hard for us to just start sponsoring things, and you have to be kind of careful. I get offers to sponsor things and we had a big company-wide talk with all four guys and we said ‘what should we do?’ And it came down to ‘if we want to be there, if it’s something you would go to anyway’…There are a lot of events and not all of them are fun, but this seemed like something that was a just a ‘yes’ – a little bit different..and costumes – that checked a box for us. Ya it was wonderful.

Ya, it was great to have you guys a part of that. If there was one character in The Big Lebowski you would want to love BBBC’s White, who would it be? Which is really just a lead in to who you created this beer for.
If you want me to come up with a Lebowski trivia answer here, I’m the worst at that….When I close my eyes I see every character drinking Black Bellow’s White out of a tall, tall glass, sort of ridiculously tall. I’m not exclusive to any one character.

But who I created this for honestly my common law wife, Shannon, who loved and still loves the Charlevoix Blanche which you could buy out of Quebec, and being a brewer I would try to make her happy basically, so that is the original person I was brewing it for.

But I guess as a company, we’re not trying to sell it to one person. We’re trying to hit a sweet spot in the beer market. To me [White] is a classic style that’s playing with modern trends. Everything is circular and coming around to these drinkable, fruity balanced profiles, so I wanted to offer something to those people who say ‘I hate hops’. 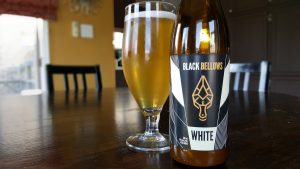 I was really happy to try the White because I think I’m that group who are getting tired of ‘the hoppier the more crafty’ and it gets to a point where it’s not as drinkable. So I think you guys are smart to stay away from being trendy.
You never know where things are going to head with hops…I’ve tasted beers that are just blowing my mind with flavour. And I get it, people want that ‘what’s going to blow my mind next’ and we just been a little more subtle in our approach…we’re not ever going to create the buzz that way just trying to be more extreme in our beer styles.

Where do you see Black Bellows in five years?
Well, we’ll have our own place. That’s in planning right now. It’s just a matter of how much fun stuff we can cram into one place. I think for some people, if they were starting a brewery they’d be focused on how little can it cost? And I think there are lots of industrial parks where you can locate something low cost, but what we really want is for people to want to be there. To host things like Lebowskifest or whatever kind of fest. We want it to be more than just a factory that makes beer. 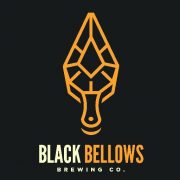