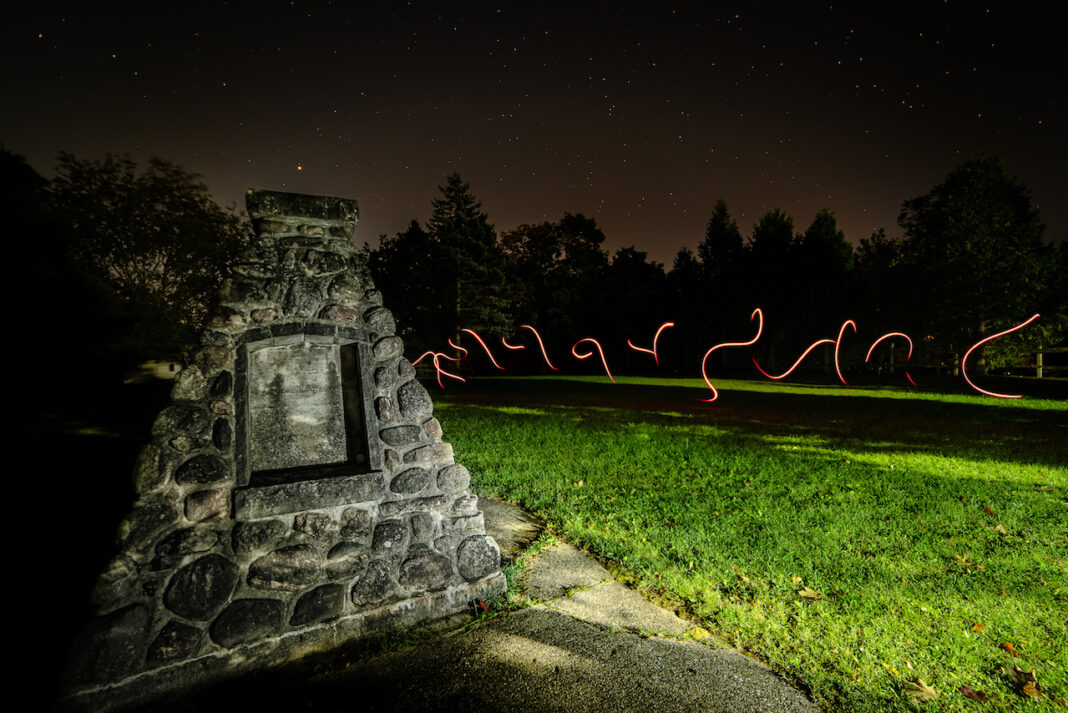 10,000 years ago, the land surrounding present day Owen Sound appeared very different. To the north lay the infinite mass of the Laurentide Ice Sheet. As the ice retreated, meltwater pooled in its wake, forming Lake Algonquin, which covered Lake Michigan, Lake Huron, and the entire Bruce Peninsula. And yet, the shores of Lake Algonquin were already inhabited. When a member of our First Nations peoples says that her ancestors have been here “since time immemorial”, this is what she means. As the ice rolled back across the land, her people watched it recede.

The ice disappeared, and Lake Algonquin drained, becoming our Great Lakes. The people remained. They hunted, grew crops, and traded. They passed stories down through millennia, blending history and myth while preserving both. They thrived.

Those who occupied the land surrounding Owen Sound became the Saugeen Ojibway Nation. Their name for themselves was, and is, “Anishinabek”, which means “original people”.

In the 1780s, following 9,700 years of unbroken habitation, European settlement in the area began in earnest. The Indian Department began brokering treaties with the original people. The intent of these treaties was to open up land for European settlement. This was achieved by having massive tracts ceded to English control, and relocating the original people to ever smaller, ever more remote, reserves.

In 1836, Treaty 451/2 was signed. In exchange for 1.5 million acres, the original people were directed to relocate to land to “the north of Owen Sound … which your Great Father engages for ever to protect for you from the encroachment of the whites”. This enormous stretch of land was traded for instructions to relocate, and a promise of protection against white encroachment.

The Saugeen relocated north of Owen Sound onto the peninsula, which at that time bore their name. Their lands were vastly diminished, but they had the assurance that they would be able to maintain their way of life, without fear of further trespass. White encroachment, however, would not be bound by treaties. Settlers squatted on the peninsula, and negotiators for the Crown followed soon after. They insisted that further concessions would be necessary to defend the Anishinabek and their land from the depredations of the settlers. Treaty 72 was signed 18 years after 451/2. The Saugeen were left with five diminutive reserves surrounded by their former territory.

One of the reserves left after the signing was the Nawash Reserve. This 11,000 acre strip began at the mouth of the Pottawatomi River and terminated at the foot of Kemble Mountain. The village of Nawash, peopled by Chippewa, existed at what is now Kelso Beach long before the founding of Sydenham, which became Owen Sound.

The Chippewa saw the Crown come for this land in 1857. When treaty 82 was signed one acre of the 11,000 was left unceded. This acre was to remain untouched and protected, as the land itself was sacred. The Anishinabek tradition holds that bones retain the souls of the departed, such that through burial, the soul remains forever in and of the land. And this one acre … was burial grounds.

In 1903, Chippewa elders met with a representative of the Department of Indian Affairs. They were asked to release their claim to the burial grounds. The elders refused. Despite this refusal, the Department proceeded to sell the land all the same. Land which the Government of Canada did not then, and never had, owned. The land was illegally sold and resold over the years. At one point a brickyard quarried the land for marl. Bricks were produced using minerals extracted from the site. Bricks which lined foundations and housed families. Bricks upon which the City of Owen Sound grew and prospered. Bricks which contained the remains of the original people interred at the site.

Years passed. Things which ought never to have been forgotten, were.

In the 1980’s, a developer contacted the City seeking a permit to build on a pair of adjacent lots on 6th Avenue West. A deal was struck, and construction began. By 1987 a pair of houses stood side by side. Beneath the manicured lawns, encasing the foundations, were Anishinabek bones. Both houses were sold. The proud owners moved in, laid out furniture, and began lives in their lovely homes. The Chippewas of Nawash were neither notified, nor consulted.

In the summer of 1992, Darlene Johnston, in her role as land claims researcher for the Chippewas of Nawash, discovered a primary source detailing the 1903 meeting between Chippewa elders and the Department of Indian Affairs – the very meeting at which the elders refused to give up the burial grounds. Darlene, herself a Nawash band member, continued tugging on this thread, and those things which had been forgotten resurfaced with urgency.

She was able to pinpoint the 6th Ave West location of the burial grounds. Following that, she wrangled from the Department of Indian Affairs another primary source. A letter, which proved the Department knew of the unceded land, knew it to be a burial ground, and failed to protect it.

Confronted with the undeniable evidence of their mishandling of the burial grounds, the Department entered into negotiations with the homeowners. Negotiations which did not include the Chippewa. The residents, having moved in just five years before, were profoundly unenthused about the notion of vacating their homes. Settlement offers were batted back and forth, quickly dwarfing market value – no settlement was reached. The First Nation made plain that they were willing to see the matter before a court – no settlement was reached.

Governmental promises of fair dealing and just action were made – no settlement was reached. Days turned to weeks, and weeks to months. A keening wind blew cold and stripped the trees. Dead leaves, glittering with frost, blanketed the ground. Snow blew across the lake, down the peninsula towards Owen Sound. No settlement was reached, and enough was enough.

Nawash band members, doubtless recalling what 200 years of negotiations and promises had achieved, took action. On December 3rd 1992, they lit the sacred fire, took the drum and began an occupation of their unceded land. A trespassing complaint was filed. When the police arrived, it was Darlene Johnston who informed them that the land beneath their feet was never surrendered – that rather than trespassing, the Chippewa had returned to their own land to defend it from trespass. Shelters were knocked together and a signpost stating “Indian Reserve” was hammered into the front yards. Drums beat late into the night. The six day vigil drew a significant amount of media attention and prompted a meeting between band officials, Johnston, and representatives from the Department. Following this meeting, a settlement was reached.

By summer of the following year the houses had each been removed. One was sold, loaded onto a huge flatbed, and repositioned some 20 kilometres to the north. The other, in a staggering statement of poetic justice, was loaded onto a barge near the site of the old Nawash village. The barge sailed north to Neyaashiinigamiing, one of the reserves created by Treaty 72. There the house was installed and began a new life as an office for land claims research. It stands there still.