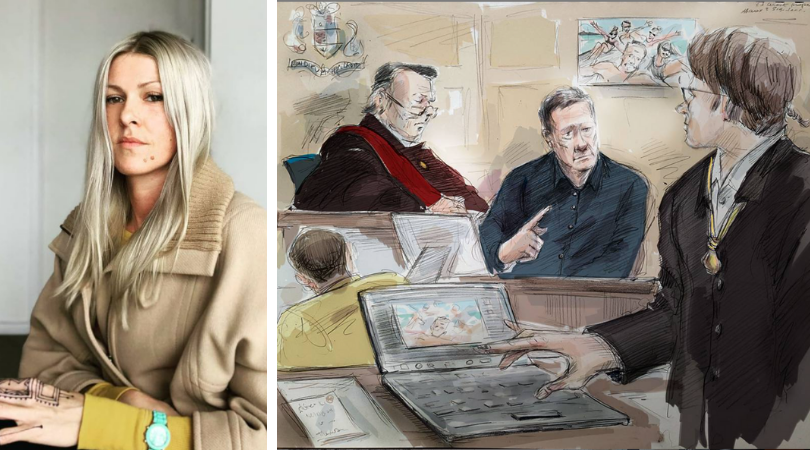 Artists have a tough go of ‘work’ in the traditional sense. Most people trade time for money and when the proverbial whistle blows, a unique state of duality comes into play. Most of us are able to leave our work behind and assume a life outside of work until we go back. Artists, not so much. Their work and their reputation carries forward, with or without their presence. They willingly craft evidence of themselves, and in some ways, create a new sense of presence they feel at all times. Their work lives independently of them.

Alexandra Newbould is one such artist – and her work takes this concept another step forward. A globally published courtroom illustrator hailing from Sauble Beach, Alexandra is in the public’s eye at a crucial time when it’s formulating charged opinions and having sometimes difficult conversations about humanity and morality. She sketches the moments that change lives forever, the accused, the convicted, and those we sometimes fear.

Alexandra began her art career as a painter and lived abroad. She came back to Canada and went to illustration school. “The academic art world doesn’t love figurative stuff,” she says. I went to Max the Mutt in Toronto, it’s renowned for video games and animation. I really learned to draw there. It was like medical school for art – a lot of anatomy. They encouraged us to sketch – it was hard because I didn’t know how.

Living in downtown Toronto, she started going to court for practice sketching the human form.

“I remember thinking as a child that court sketches were so cool. I didn’t think I would end up doing that, but Rob Ford was in appeal court, so I went there and drew this portrait of him and my brother was like ‘go talk to this journalist and this journalist.’ I just cold-called the Toronto Star and they picked up that drawing and that was my first published court sketch.”

From there, she kept drawing and cold-calling media outlets to pick up her sketches. She quickly added CTV News, the Canadian Press, Global News, the Globe and Mail, the National Post and NBC to her client list. Her work has also been featured in the London’s Daily Mail and the Al Jazeera Media Network. She’s drawn Rob Ford, Kathleen Wynn, Jian Ghomesi, Davonte Miller, as well as the highly-publicized cases of Richard Kachkar, Bruce McArthur, Mohammed Shamji, James Forcillo, and Dellen Millard.

So what’s it like drawing the accused in some of Canada’s most high profile court cases and the occasional convicted serial murderer?

“I have no problem,” says Newbould. “I’ve been extremely close to mass murderers. Dellen Millard – he knew who I was. He smiled and nodded at me. That doesn’t freak me out at all… Millard is a classic narcissistic mass murderer – he’s easy to hate. But some of them are skitzophrenic, or have serious mental health issues; they have families… I feel more guilty or impacted being near victims’ family members – that rattles me more… Sometimes the situation is so bloody sad that it’s just terrible. I’m a person that would be impacted by that emotion anyway. Being there doesn’t make it any worse – being a parent makes it worse.”

Rather than being provoked emotionally by the more evil connotations in court, Alexandra finds herself much more freaked out by the idea of people seeing her work all over the world and the ramifications her work may have on the outcome of a trial or the perceptions of the public.

London was a zoom court,” she says of the sketching the accused in the fatal truck attack of a Muslim family in London, ON in June. “I drew it in my car. I was more nervous because I had 5 min to do that sketch and that was in LIFE and they needed it immediately. That thing went fucking everywhere! I saw it after and thought I should have fixed this or that – I have these flashbacks from teachers in art school saying ‘this is terrible, what is that?’ Knowing it’s going to be published – the element of nervousness doesn’t stem from the person – it’s more my craft.”

As you’d expect, news outlets have an expectation these sketches will be as close to anatomically perfect as possible, and the pressure of a courtroom environment adds to the stress of perfecting your craft under the  intense pressure of knowing the world will see the work in as little as a couple of hours.

“It’s like meditation – you gotta be in the game,” Alexandra muses. “As a portrait artist, it’s all about the person in front of you. At my best, my mind is pretty blank.. Expression is key, the gestures of the people. Always start with the face. I know I got [accused London truck murder suspect Nathaniel Veltman’s] face right – sometimes I stare at the person and then draw it afterwards. I pick up their eyes.”

“I didn’t know it would happen to me, but it’s a labour of love. I love it. It’s fascinating. Endlessly fascinating.”