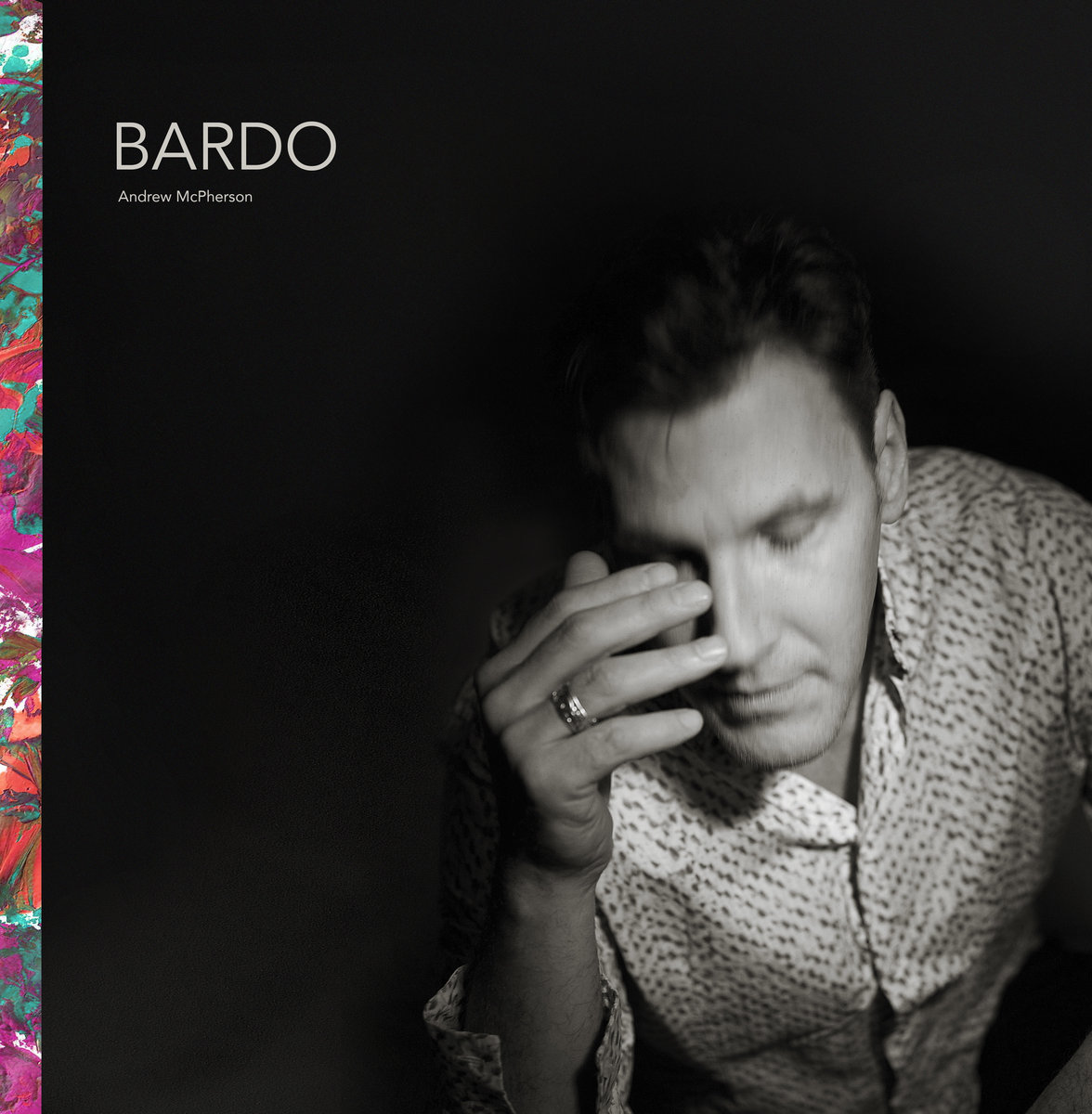 I used to work at a Nepalese restaurant called Rocky Raccoons in Owen Sound. The reason I bring that up is the owner and chef used to spend after-hours pursuing his penchant for DJ-ing and he loved to play the Buddha Bar CDs. This was my first introduction to Andrew McPherson, who is currently promoting his recent solo effort, Bardo, and who is the mastermind behind Eccodek featured on the Buddha Bar CDs. Eccodek has released 7 albums and received 2 Juno nominations, but McPherson has also had a very successful solo career, releasing 4 albums under his own name, and being labeled a “sonic architect” by the Boston Globe and “a master soundscaper” by the Ottawa Citizen.

Bardo is his most recent and one that has been described as “a sprawling mix of folk, prog, ambient, and rock” with “a lyrical narrative examining loss, war, [and] madness.”

We caught up with McPherson recently to ask him about his new album, but first have a listen to his first single Forest for the Trees.

Rrampt: You have had a very accomplished career to this point. What elements are you most proud of? What are some things you haven’t accomplished yet but plan to?

Andrew: Well I suppose the biggest achievement is that people continue to be curious about what I have to say. I’m trying more and more to remember that that’s a great honour and a privilege. Not to wax too philosophical right off the bat but a life in the creative arts is a real gift. I’m capable of forgetting that, like everyone, and get bogged down in petty complaints or short-sightedness. On a more grounded level, my project Eccodek being nominated for a second World Music Juno was pretty special. It meant that the first nomination wasn’t a fluke…haha. Somehow getting that acknowledgement for all that craft, time and inspiration is a real validation to stay at it. Don’t get me wrong, not much happens even after you win one – I’m under no illusion, but the fact that your peers are choosing to elevate your work above others to be noticed and celebrated is a wonderful feeling. I would also say that seeing my remix and production work show up on some influential labels I’ve loved for years has felt like a real feather in my cap. A kind of “I’m playing with the big boys now.” I think any artist finds themself sizing up their work against their heroes and/or peers. I think of it as that old notion of becoming a better tennis player by playing a bit above your ability. Humbling but you become a better player.

In terms of things I’ve yet to accomplish, the real elephant in the room would be a full length film score. I’ve had a taste of this work when Les Hartai (beats and samples in Eccodek) and I were hired to rescore and perform live, a soundtrack for Fritz Lang’s “Metropolis”, which we debuted at Toronto’s Yonge and Dundas Square. It was epic. We ended up releasing an album of the music but I’ve yet to create music for a new film and it’s a bucket list item for sure.

Rrampt: What kinds of things have you been able to explore in this solo effort that you weren’t able to with Eccodek?

Andrew: Eccodek is a fantastic project in so many ways. The collab’s, the inspired music of other cultures, the heavy bass and dub vibes and of course the live experience is so immersive. Audiences just bliss out and dance their asses off. My solo project is the inner Andrew McPherson, Eccodek is the outer Andrew.

With the solo work, I’m able to access an intimacy, vulnerability and empowerment that comes from putting things very vividly on the table and singing about them. I always feel a little bit like the Wizard of Oz in Eccodek,  pulling levers behind the curtain and creating all of these alternate worlds for the listener and viewer. It’s a wonderful mechanism for me to do some sonic space travel. The solo work is about coming back down to earth and staring all the ugliness, beauty and imperfections right in the eye and with little or no place to hide.

The other stark contrast is that i don’t sing in Eccodek and up until our last record, Singing in Tongues, there’d never been an English speaking vocalist. With all my solo albums, I’m the singer, the musical sherpa and I’m telling my story. That’s a very courageous thing for people to do I think. Ask most people what their greatest fear is and it’s likely either public speaking or singing in front of an audience. It’s ballsy.

I would also say another fundamental difference is that I write primarily on guitar with my solo work, whereas Eccodek is crafted more from the keyboard. It changes the way I develop material melodically, rhythmically and harmonically and brings distinctly different energies to the way the material is performed. That’s been really fun getting back into a different part of my body with a Gretsch hollow body electric on my chest when we perform. The last real distinction I’d offer is the recording process. A good chunk of Bardo was, at least from the standpoint of basic tracks, recorded live off the floor. That’s very different from Eccodek which is built up like a beautiful sculpture from all sorts of improvisations and experiments. Looking several players in the eye when recording keeps you sharp and viscerally connected to the endgame. 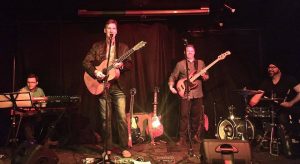 Rrampt: What are some of the influences for the album Bardo? What kind of music have you been listening to lately?

Andrew: The biggest influence on Bardo was probably the weekly Wednesday night hootenanny I hold in my studio with a small circle of close buddies for the last 14 years. Seriously. It’s a no egos affair, with every kind of playing level welcomed. It’s the most musically safe place I’ve ever been and I hope I never have to give it up. Since we play, almost exclusively, other people’s music we learn so many great songs. We’ve amassed quite a catalogue and, over the years, I’ve come to realize how the hootenanny was slowly educating me in the art of songcraft.

After a while you start to pick up on little tricks that guys like Beck, Neil Young, Nick Cave, PJ Harvey, Ed Harcourt, Bowie and on and on just do so beautifully. I would have to say that as a lyricist, storyteller and melodist, Aimee Mann has been the biggest influence in the last number of years. Not so much in her style but in the beautiful economy and weight of her words and melodies. I’ve been quite taken by Elbow’s records, epic, sprawling and romantic. Beachhouse has also become a wee addiction and of course Bowie’s Blackstar is a fucking masterpiece. The other primary influence on Bardo was a big shift in my personal life. I’ve experienced a real re-examination of my life’s choices, great periods of isolation and reflection, a more full commitment to fatherhood, ownership of the past, all of these things have shaped the type of album Bardo became.

The word ‘bardo’ is a Tibetan expression that essentially means, a state of existence between death and rebirth. Heavy stuff but inevitable I think on some level for all of us. At some point you’re going to be asking yourself some deeper questions about your commitment to this life and where it’s taking you.

Rrampt: I notice a lot of pastoral images/references on this album. How important is your connection to the outdoors and the elements?

Andrew: I moved from Toronto to Guelph because i just couldn’t take Toronto’s relentless urban-ness. Don’t get me wrong, I love that city and lived there twice over the years but I’m increasingly in need of more space, quieter surroundings and a greater reverence for nature, both personally and in my community. I foresee needing to get further into the wild than Guelph but, with a relatively new studio building on my property, I’ve invested in staying in Guelph for a while. I’ve always felt humbled by nature and I’m grateful for that humility. It’s good to feel small and in awe of this world, it forces you to learn and evolve. What we’re seeing in the US is, I believe, a direct correlation to the disconnect we’re experiencing in our culture and the world we inhabit. Mother Nature isn’t going to tolerate this cavalier attitude much longer, I’ll put money on it. Nature just feels like the perfect backdrop to creating or cultivating a creative mindset. I think I would write very differently if I had no access to rural or non-urban settings. Cities are too amped up, too self-possessed. The country and nature in general isn’t really interested in whether or not you catch its magnificence. It’ll just carry on with or without you. I find that to be quite comforting in our selfie, instagram’d universe where validation at the end of a social media feed is what drives our culture.

Rrampt: What do you want people to tell their friends after they leave one of your live shows?

Andrew: That they heard a passionate, poetic writer offering his audience a familiar but unusual take on pop songs, backed by an insanely musically literate band.

electHER Now is changing the political horizon in Grey Bruce