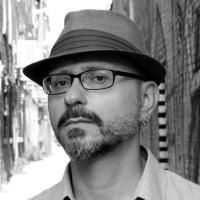 Because our mental state is North Korea and we’re elbow deep in the fondue in Kim Jong Un’s porn ‘stache rec-room while he erects another missile on the crash pad and it’s just another manic depressive Monday head to toe in self-absorption which is the new black because the ballock dropped at midnite upon us humans while 51% still suffer patriarchy which is the Y chromosome’s ace in the asshole in the good ol’ boys club where the first rule of the status quo is you don’t talk about the status quo but it’s another day another Weimar Reichsmark for daughters pink as Pepto Bismol shots as they evade the mink in the henhouse who’ll be played by Kevin Spacey in the biopic which will be titled Even Grief is Political Except for the Entitled and the air is erotic like a Republican lap dancer grinding in the face of people who don’t know you gotta take your shirt off to iron it while they miss the irony of exiling their own ancestors when they tell us to bootstrap ourselves in hobnailed boots nailed to the floor at the foot of the wall meant to keep out the future which was heralded by the dying rock star in one last black and silver song sung to keep us warm on our long journey while our breath turns to frost on our next-best-thing-to-a-ghost faces before we pitch forward face down onto the snow between the ties on the railroad tracks which we follow and that lead us all to somewhere and to nowhere and to everywhere and forever and for always, amen.