Home Lifestyle Blood, Sweat, and Beers Our guide to really tasting your craft beer with the new Rally... 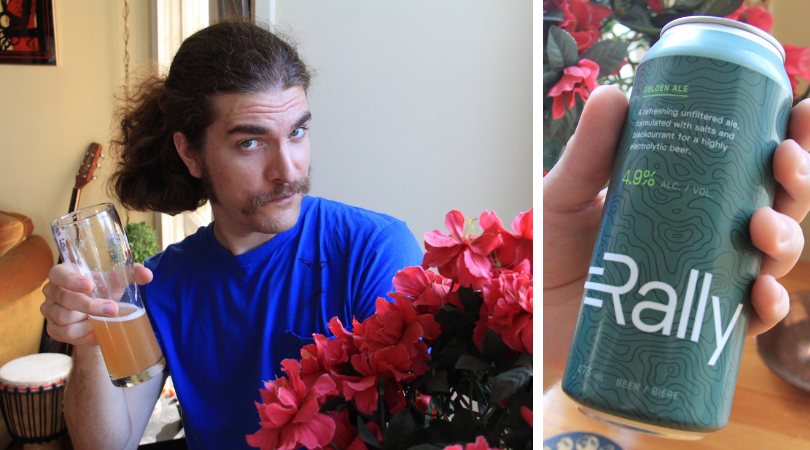 Hello! I’m Andy. I do beer review articles. You may or may not have read some of them in the past.

Today I’m going to go over my method for tasting a beer and show you how to get the most out of your craft beer experience.

The beer I’m using as an example is the golden ale from Rally Beer Company. It’s designed to be a highly electrolytic beer that can be enjoyed after engaging in your favourite sport! I’m not sure what to expect, but I know it’ll be interesting and worth dissecting! Because beer is good, but new and different craft beer is better.

“I get some pleasant bitterness from Rally. The blackcurrants are present in the initial taste, but not overwhelming.”

How to taste beer

You need to cleanse your palate in case you’ve had a flavourful meal. You don’t want the ghosts of lunches past interfering with your beer experience.

The next step is to pour your beer.

I’d like to mention that the type of glass you’re using does not matter. Different shaped glasses for different styles of beer exist, but the important thing is that you are able to smell the beer as you drink it. After all, smell is half of taste.

After pouring your beer, the first step is to look at it.

Make a note of its appearance – colour, how big its head is, etc.

You can often tell a lot about a beer from the colour. In general, lighter beers tend to be lighter bodied with fresher flavours such as fruit and grassiness. Darker beers are usually heavier with hearty flavours like smokiness, chocolate, and coffee.

Of course, there are exceptions to these rules. It’s possible to have a dark beer that’s surprisingly light bodied, but I’m generalizing here.Knowing the type of beer will also give you a good indication of what to expect out of a beer. Ales such as this one tend to have a crisp flavour with a fairly light body

Another thing you mustn’t overlook is the ingredient list.

It can prepare you for a few unexpected flavours. In every beer you will find a grain (usually barley) hops, and water. Sometimes you’ll see extra ingredients, such as fruit or cacao nibs or something else that’s tasty and delightful.

Rally has the basic beer ingredients plus blackcurrants and salt, so I’m already expecting some amount of fruitiness.

A quick aside: The oldest law still in force today was enacted in 1516, and it’s the german law limiting the ingredients of beer to barley, hops, and water. If you want to know why this was controversial, I can talk for days about it

The next thing to do is the smell test.

First, breathe most of the air out of your lungs. Then do a deep inhale with your nose just above the glass, and make a note of what you smell. Is it citrusy? Does it kind of smell like bread?

I’m getting the subtlest hint of fruit from Rally.

I know to expect more fruit once I taste it, but I know I’m not in for a totally fruit driven flavour experience.

The next part is a bit of a tricky thing to describe. Exhale, bring the glass to your mouth. As you’re taking a mouthful of beer, inhale through your mouth and nose.

Let the beer rest on your tongue for a few seconds. After swallowing your beer, exhale through your nose.

This allows for as much flavour and fragrance to hit your senses as possible, and you’ll get a really good sense of what your beer is all about. I get some pleasant bitterness from Rally. The blackcurrants are present in the initial taste, but not overwhelming. The aftertaste is very fruity, with the blackcurrant flavour lingering on the palate for quite some time.

The flavours in this beer are really nicely balanced. There’s a lot of depth to this one!
After you’ve taken notes on the flavour, the next thing to break down is the mouth fee
Is it heavy? Is it creamy? Light and airy? Somewhere in between?

Rally is light and creamy, and it almost disappears after you swallow it.
Compare that to a stout, where you’d feel it travel down your esophagus all the way into your stomach.

The last step, and this one is my personal touch, is to identify it with an experience.

I find that suggesting a situation in which to drink a beer really gets across a lot of information about said brew. If I was telling you about a beer to enjoy in the fall, you’d have images of harvest flavours dancing in your head, maybe something to warm up with by the fire after a nice fall hike.

Rally in particular feels like a beer to enjoy after an activity — And I’m not just saying that because it’s written on the can. I can picture myself cracking one of these after getting home from a bike trip out to Sauble. It’s refreshing, flavourful, and light. Plus the electrolytes it contains will help me recharge after sweating my brains out. Now, as you can see, I’ve taken all these notes and I’m only about a quarter way done my beer! So the rest of the beer can be used for reflection, contemplation, or recreation as you see fit.

I think that’s everything… So go out, get yourself a beer or two, and see if you can unlock its secrets!