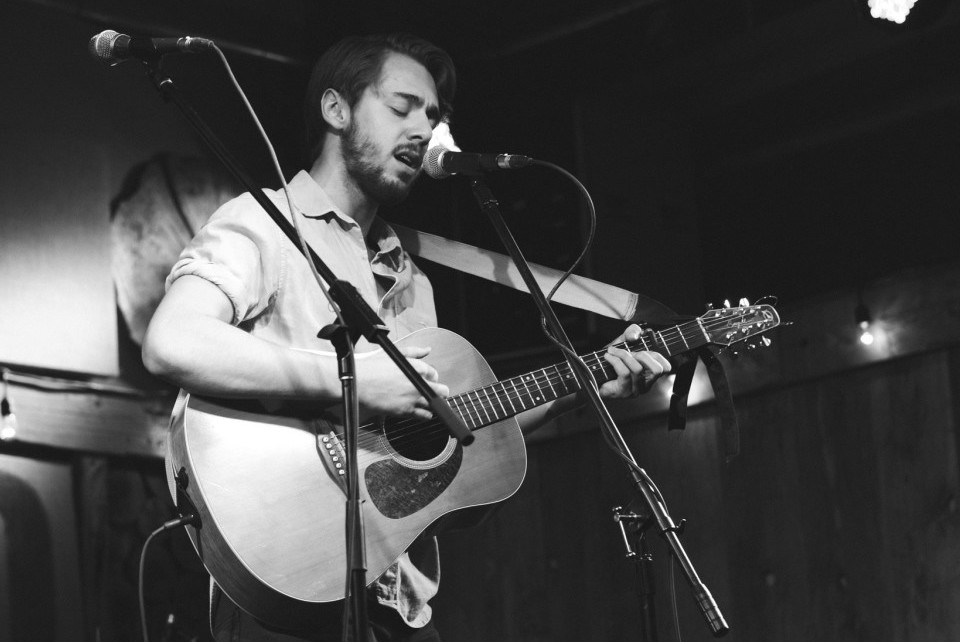 The first time I saw Marshall Veroni perform, it was at an elementary school. We were both there inspiring the youth to embrace music and writing. I was there to sell the life of a writer; I’m not sure I succeeded.

Veroni was much more effective in showing them what happens when you embrace music. He had them (and me) in the palm of his hands. I became one of those elementary school kids captivated by the calm talent he exudes. He’s a chill, genuine dude who writes extraordinarily good songs. The kids might not have understood how difficult it is to do what he does. But I know talent when I see it.

Since that day, I’ve seen Veroni perform at The Bleeding Carrot, Heartwood Hall, and intimate house concerts with Greg Smith and Pat Maloney. He’s sampled some of his new songs along the way, but on October 25 at Heartwood Hall, he’s officially launching In Fields, his first full length effort.

I caught up with Veroni to ask him Five Questions about his year, his new album, and what bottle of wine would go best with his music. 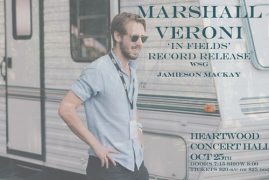 2018 has been crazy. I’ve spent the majority of it obsessing over this collection of 8 songs that I’ve been recording. I’ve recently left my job and moved into a new place in order to commit fully to this project and focus on the art. I’ve been able to get a ton of writing done for the next project as well and I’ve taken some time to get out into the woods a bunch, so I’m grateful. Feels like the year was maybe eight weeks long, tops.

2) You’ve just finished recording your new album In Fields. What was the best thing about that process? What was the worst?

The best part of the project was experiencing the songs coming from their initial roots (some were written over seven years ago) to this stage where it feels like they’ve grown up. It’s been incredible turning these daydream-like production ideas into solid structures for the music. The hardest part has been stepping away from the project to breathe here and there. It’s an investment. These songs mean a ton to me, so naturally I want to be there with them every step of the way, but I’ve found that it’s extremely important to step the hell back here and there. Not to hover over Mitch’s (my engineer) shoulder. Finding new musical trust in other people has made the process beautiful.

3) If you, Greg Smith, and Pat Maloney formed a cover band, who would you pay tribute to?

I think a Tom Petty and the Heartbreakers tribute would be dope for the three of us. Specifically the ‘Damn the Torpedos’ album. I’d love to force Greg into some electric guitar playing. Yeah. That or TLC. I feel like getting some three part harmonies on a slowed down version of ‘No Scrubs’ could be real good.

4) You’ve been working at Coffin Ridge Winery this past year while you’ve been making this record. What is the perfect bottle of wine to drink while listening to In Fields?

Hmm. Depends on the song, but There’s a tune called ‘Young Ugly and Angry’ on the record, that I finished writing while nursing a bottle of Steve Byfield’s Cadence last winter.

If you can get your hands on a bottle of that. That’s my recommendation

5) What would you like people to say after they leave your show on October 25?

I’m hoping people feel warm. That’s one of the main reasons I love playing. Sharing, not just my music with a group of people, but straight up sharing a room with a group of people who may be partial strangers, but have a shared experience for an hour or two. I hope people feel the way I do when I get to share my art. I also hope that they take the record home and have a chance to listen to it solo as well. Two totally different experiences.