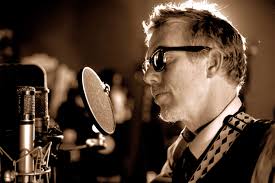 Whenever I see Drew McIvor play live around this area, whether it be at the Bruce Wine Bar in Thornbury on a Wednesday night, or at the odd Heartwood appearance in Owen Sound, I always leave wanting more.

So when I sat down to listen to his most recent effort, Through the Tangle of Trees, I heard something familiar. See, he had popped into the Heartwood one summer night to try out some new material, and got the crowd singing along to a chorus that went “flow river flow/once we were hollow/now we are whole” which is from a song called Flow that closes out the new album. I was really impressed by it, and when I heard it on my first listen of Through the Tangle of Trees, I instantly remembered it, because…well it’s a hell of song. And it embodies the main theme of the album quite well. The theme is love and the song’s chorus is crafted beautifully. 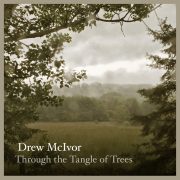 Because I was an English major for four years of my life, I appreciate lines like those – they use innate symbolism like water to remind us of the journey we’re on, and they refer to the wheel of fortune that rules our fate. Our lives are forever in spin. Sometimes we’re up, sometimes we’re down, but we always come full circle at some point. And that’s what this album has done well – illustrate the highs and lows of love.

McIvor covers both the ups and the downs, but even the heartbreak songs are fun. Take the opening, Heart in a Bag, a much safer start than 2014’s Porchlight (Boogaloo), and one that describes the feeling you get when you realize you’ve let something slip by; a sweet version of ‘you don’t know what you’ve got until it’s gone’. It sets the stage for the theme of the album, maybe not the tone. The next few tunes pick up where his last album left off – memorable guitar riffs, horns, and fat bass lines, which sets McIvor’s music apart from so many others in this area. When the ska/reggae sound kicks in, it brings a more optimistic take on love, and the heartbreak on the first track is quickly forgotten about. You can compare him Paul Simon and Jason Mraz, but I hear a little Bedouin Soundclash in there too.

He’s flying high on the potential for love on You and Me and You with lyrics like “If I had the choice between a million bucks or walking up to you and trying out my luck/ I’d take the latter of the two/ ’cause the first one just won’t do” and echoes McCartney by asserting “money can’t buy you love”. Then he gets sentimental on the funky Stars singing, “When we look up at the stars above/ that’s where we’ll find our love”.

This is where I really regret not seeing McIvor roll out his new album in September; these songs would be great in a live setting. I’ll be sure to put aside my other obligations and workload next time to catch him in Grey/Bruce/Simcoe for a full set.

Good Company is one of my favourites on this album – it’s poppy but with a little grit to it, just a little sprinkle of blues. It feels like this is McIvor at his best. The message reminds me of his music video for 45’s and 33’s where he had the good company of so many local musicians backing him up (you’ll see a Coco Love Alcorn in there, with a Tara Mackenzie, a Tyler Wagler, a Wayne Smythe, and a Mark Mariash). And it also speaks to what many of us are looking for in love – someone to ‘make the days move easy’ as Taylor Goldsmith puts it.

But just when I think this album is providing more answers than questions on the workings of those secret machines inside our chests, McIvor slows it down on the literal, Question Song, to clarify that he still needs clarity on some things. He gets help from Steenika Gilbert in singing “So many questions echo in my heart/ and who knows all the answers?” This is a poignant place in the album to remind us that know matter how much we discuss this thing called love, no one really has it figured out.

I’ve taken a few rounds in the long distance boxing ring of love and always seemed to come out beaten up more than usual. But there’s a girl up north, one that he met in Toronto (but that’s not where she’s from), who is the inspiration for Marmora Blue and I’ve got my fingers crossed it works out better for these two than it has for me. It’s a catchy one and sure to be a local favourite as it name drops Owen Sound and South Georgian Bay. I had to look up Marmora, and it seems like a nice little town, one where you might find a girl worth driving hours for.

The final four songs on this album are the ones that really grab my attention. It’s what I love about this album – the constant change in stylings. He keeps your attention by not letting you get too comfortable with one genre of music, but instead weaves the songs together using theme.

Who doesn’t understand the feeling of Intoxication when it comes to love? And the song speaks to McIvor’s range – he could play a darkly lit lounge or a bright dance hall with his arsenal of tunes. Porchlight has an Amos Lee meets fifties-doo wap sound and is one of my favourites. He impresses with his buttery vocals, which leads perfectly into Flow, where he brings it all together, and where we started this review.

“Truth, it’s hard to see/through the tangle of trees/but I’ll bet mine your love is kind” he sings and we get a clear sense of how McIvor views the world. It’s confusing; love is definitely confusing; truth exists but it’s hard to find unless you’re willing to really look; but most of all that love, with all it’s ups and downs, is what we all strive for regardless of where we’re at on this spinning wheel of fortune or the river we’re journeying down. At least he’s not done looking through the tangle of trees for the promise of it. And neither should we.

“This body’s old/but this heart’s still young” he says. I feel you Drew. I couldn’t agree more.