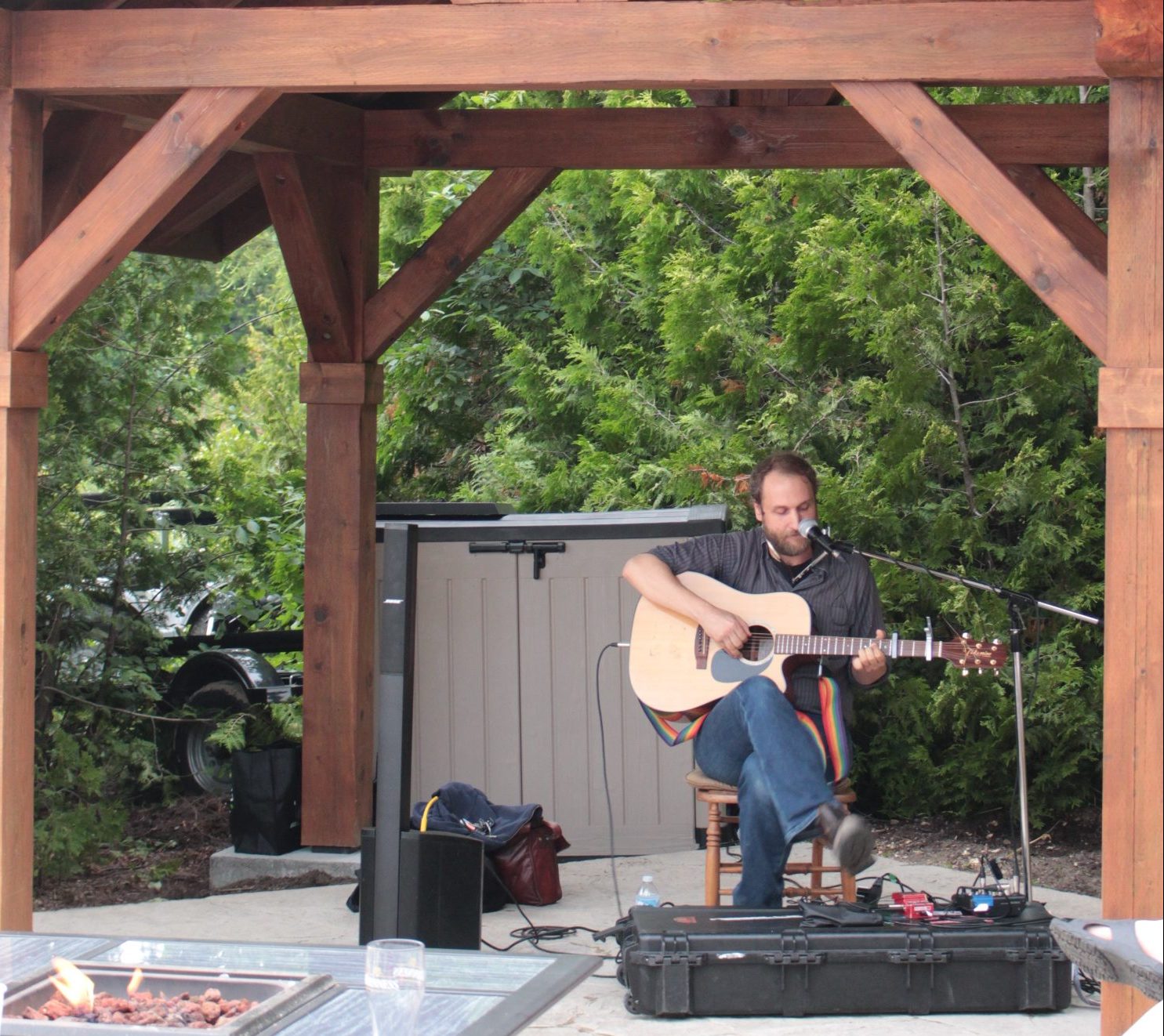 On Friday night I had a good problem. I had the choice between two great house concerts. And when I say house concert, I really mean backyard concert. I use the term loosely. But it’s a concept that seems to be gaining momentum the last few years whether it’s within the four walls of someone’s residence or on their lawn.

I recently received an email from Dan Mangan (not personally) asking to fill out a survey on the whole ‘house concert’ thing. He is trying to start a movement to connect Canadian artists with homeowners who would be willing to host them. This way, an artist gets a venue where they get an intimate connection with their audience and the audience gets a comfortable place to gather where they can bring their own drinks and food. Mangan is trying to start a movement, but here in Grey/Bruce/Simcoe, this movement has already begun.

I have a friend who has been hosting house concerts in Owen Sound for years. She’s invited Jeremy Fisher, Matt Epp, Coco Love Alcorn, and Craig Cardiff to name a few. I missed Cardiff when he played her house years ago, so when he announced a backyard show last night in Wiarton, I was in.

I had also contemplated a backyard show in Meaford with Bry Webb, but Wiarton was closer to my Sauble cottage. So I drove twenty minutes with my lawn chair in the back and arrived at the backyard of someone I didn’t know, but who had a picturesque view of Colpoy’s Bay and Cardiff playing under a gorgeous timber frame gazebo.

As the sun set in the background, Cardiff did more than play a selection of his Canadiana-style folk songs, he inspired a sing-along and a dance-along. He even convinced a couple audience members to get up and act out his lyrics as he sang. He wanted us to do more than just listen. He wanted us to get invested in the evening. I think that’s why he also passed around a notebook and pen with instructions to write something true and make it anonymous. Maybe it was light reading for him on the drive home, or maybe it was for songwriting ideas, but regardless it was a cool way to connect. I wrote a full page of truth about this past year and it felt great.

He did, after all, tell us about all the conversations he’s had that inspired the songs he played for us. I think he is genuinely interested in the lives of other people. I mean, he did write a spontaneous song on the spot about a couple in the crowd after asking how they met. It’s something he’s been doing lately and admits that it doesn’t always work. But on this night, it worked. It was hilarious and touching. It was impressive.

Cardiff’s discography is intimidating – it’s difficult to know where to start if you’re just getting into him, but his live performance gives you some guidance. He played his most popular, Dirty Old Town, off Goodnight (Go Home), which is my most listened to of his, but his newer stuff gave me some new entry points.

Lenny Bruce Lee, Father Daughter Dance, and Love is Louder (Than All This Noise) were all from the most recent album, and stood as highlights, especially with their introductory stories and requests for people to dance.  First the host couple slow danced to Dirty Old Town and then the host danced with her dad to Father Daughter Dance.

One of the best things about a house concert is meeting new people, and I was able to meet some great ones last night. The hosts were amazing and generous, offering shots of tequila and scotch to anyone who was interested after Cardiff had packed up and hit the road.

I had a good problem last night. I had to choose between two intimate live shows at someone’s house. I chose Craig Cardiff on Colpoy’s Bay. I would have loved to be at both, but that’s the whole reason it was a problem, and one I hope to continue having. If Dan Mangan has his way, these problems with continue to present themselves to music lovers like me.

If anyone is interested in hosting a house concert, it can be as easy as contacting the artist and asking them directly. Just make sure you invite me too.