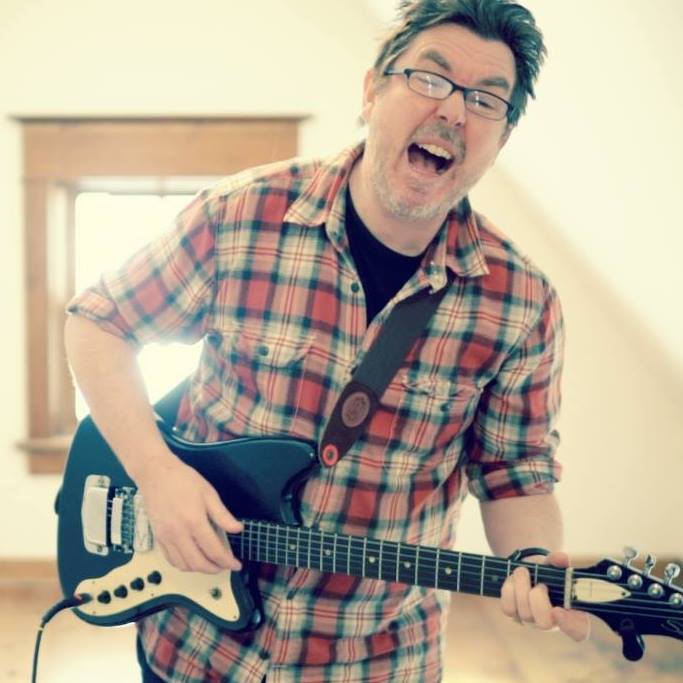 Based on the title of his new double album, you’d think John Brownlow had some insight into the September weather we’ve be experiencing. Summertime, a double album of extraordinary talent and scope, is actually in reference to the summer days in which Brownlow recorded it – his front door wide open to the  beautiful Beaver Valley.

I knew John Brownlow was from the Beaver Valley because I’ve heard about his Epping Sessions. His name keeps popping up in circles I frequent, first in conversation with musician Greg Smith, and then with others. I’ve seen his name attached to Songwriter’s Nights at places like the Red Door Restaurant in Meaford and I’d been meaning to get out to see him play; and I knew he was linked to the band Sportswriters, who I’d kept missing through the years, as well. I really have no excuse other than life’s got in the way.

But I was determined to see him at the Summerfolk Showcase at Heartwood on Sunday, Sept 24. And when it was cancelled (to pay respects to cherished community member who passed), I thought that maybe all I will know of John Brownlow for the next while is his album. And I’m okay with that because it’s a really f-cking good batch of tunes.

I haven’t had this much fun listening to double album in a long time. The songs all work together in a kind of Brit-pop meets pop-cult fashion.  Let me explain – John’s sound is influenced by the likes of Elvis Costello, Pulp, Squeeze, Wire, and even a little Oasis. And he’s a professional screenwriter, so his lyrics are often painted (yes, I just said words are painted) with the brush of popular culture. His imagination as a writer comes through in his lyrics, and his musical influences create “a focused, finely crafted collection of hook-driven songs that share a distinctive Britpop DNA” as he describes it.

Take the first song, Burn Hollywood Burn, which details a couple who become fed up with the Californication and burn the Hollywood sign down. It’s a catchy tune, a radio hit possibly, but for me, the album really gets going with Live Forever. It’s one of the best on the album, and one you’ll be singing long after Disc 1 is over. It’s the sign of a fine songwriter, and this album has many.

Asteroids follows and is an airy tune that slows things down after the first two burners. While songs like Asteroids are testaments to his imagination, there are many more seemingly personal glimpses, ones like Already Gone, and Pink Raincoat. “You left my head up in the clouds and my heart down in the gutter and nothing much in between” he sings on Already Gone, a song that, if you weren’t yet convinced of his talents midway through Album 1, will place him on your radar for sure. Simply put, you’ll want to go see him play these songs live.

Other highlights on the first album are Don’t Walk Away with it’s super catchy chorus and sexy bass lines. It ventures into the eerie sound the Sadies have mastered, which might be one of the only Canadian influences I can discern. Mostly, he’s drawing from “[b]ands that had the rawness and energy of punk but brought it to bear on these earworm pop songs” he says.

Government Work is where you’ll hear the Costello influence, but And the Creek Don’t Rise is more of a standout for its great tempo changes and fun piano chords. It seems like a good culmination of his influences and a peak of his talents as a songwriter and lyricist. “If wishes were horses, beggars would ride/ One day I’ll be with you/ God willing and the creek don’t rise” he sings melodically.

When he cries out he’s getting old on this one, we know he’s not that old, but hitting an age when his wisdom and experience are really paying off. He’s got a lot of stories to tell, and the wisdom to tell them properly. He’s not pretentious in his writing, which can victimize younger songwriters sometimes. And this isn’t an accident. He says he gravitated to songs “without an ounce of pretension to them” growing up.

The ‘bouncy’ feel to the album (I actually hate the word ‘bouncy’ to describe music, but I think it actually applies to this one and I’m gonna use it a few more times) is at its most effective on Don’t Walk Away – I dare you to not sing along. But the ‘bounciness’ (see there it is again) doesn’t quite work as well on Get Your Groove On. I have my favourites on this adventurous album, and you’ll have yours. He narrowed down hundreds of song ideas to just 70 and then picked 32 that hooked him in the first few bars. The result is a collection that, while you’ll like some more than others, all have a catchy opening.

For instance, Gonna Have to Let you Down starts with a bass line that could have been off Nirvana’s Bleach and moves into a fast paced song about the evils of ego. With lines like “Send me down to Hell, and turn the heat up to eleven”, it’ll grab your attention, especially if your able to pick up the pop-culture references (did you get that one about turning it up to eleven?). And he’ll keep your attention with some kick ass guitar solos.

And speaking of guitar, Let the Feeling Go has some groovy guitar riffs matched with cool lyrics like “You say you hate the sinner, but you’re longing for the sin.”  He returns to his theme of Summertime to close out Disc 1. “My love is the sound of the rain in the morning” he begins the sultry Kingdom Come with. “My love is the scent of a warm summer breeze”.

Disc 2 kicks off with a synth beat and rocking cadence in Occupy My Heart that describes the angst of an empty house. It’s in the same kind of tradition as Wilco’s Hate it Here off Sky Blue Sky. He’s able to do what Tweedy does so well – put us there by using the unsexiness of daily routine and the vulnerability of longing.

Rip it Up‘s reggae beat walks us through the struggles of small town living and how it’s up to us to make our own fun sometimes. Sure, he enjoys the view of the beautiful Beaver Valley through his front door, but life in a more rural area can have it’s drawbacks – not as many places to go and “rip it up, and shake it up and tear it up” so you’ve got to make an effort sometimes.

There are images of snow melting on hands and some beautiful organ sections on You Slipped Through My Fingers.  Shame the Devil is the most aggressive song on Disc 2 and the sexiest. He understands the nuances of relationships well. I was hoping he kept going in that vein, but Sunshine on the Radio doesn’t quite live up to the rest of the songs on the second effort.

Maybe I’m just a sucker for the melancholic, but I really dig it when he unloads a darker, reflective number like Where My Mind Goes. His vocals are at the forefront with only minimal instrumentation behind.

The same goes for Pink Raincoat, one of my favourites, which is a kind of anti-love song. He admits “I can’t claim this is a love song.” I’d describe it as more of a ‘hey, we weren’t cut out for each other in the end, but damn did you look good in that raincoat’ song.  Leonard Cohen would be impressed.

He writes a lot about the places that love resides and hides and might return, but he’s more literal about it on “Where Does Love Go?“. He was looking for it on Occupy My Heart and kind of had a handle on it on Pink Raincoat, but admits here plainly that “I don’t know” in response to his title question. I hear you John, I have no clue either. I’ve often wondered where love goes sometimes. I mean, it’s gotta go somewhere right?

Storm Coming is a groovy tune that’s a throwback to late sixties soul; it’s got a different message than most of the other tunes on the album but is represented on the album cover as the ominous backdrop to the beautiful things in life. Brownlow injects a lot of hope into his lyrics, but here he tells us “There’s a storm coming and there ain’t nothing we can do”. Ominous indeed.

And no matter how ‘bouncy’ (one last time) this album is, there are many dark images hovering in the background. There is realism here; there is the voice of a man who has accumulated a lot of experiences and understands that life brings storms sometimes. I know the older I get, the more my sense of hope is peppered with the realism of unpredictability. We learn to enjoy the summer days and weather the storms.

And we learn to appreciate good music and let the pretentious stuff fall away. So, what I’m saying is that this is a record we should raise up high. Summertime is an album of immense vision and it’s a signal there’s a lot more to come from Brownlow no matter what season he’s recording in. Maybe we’ll have a Wintertime album come Spring.