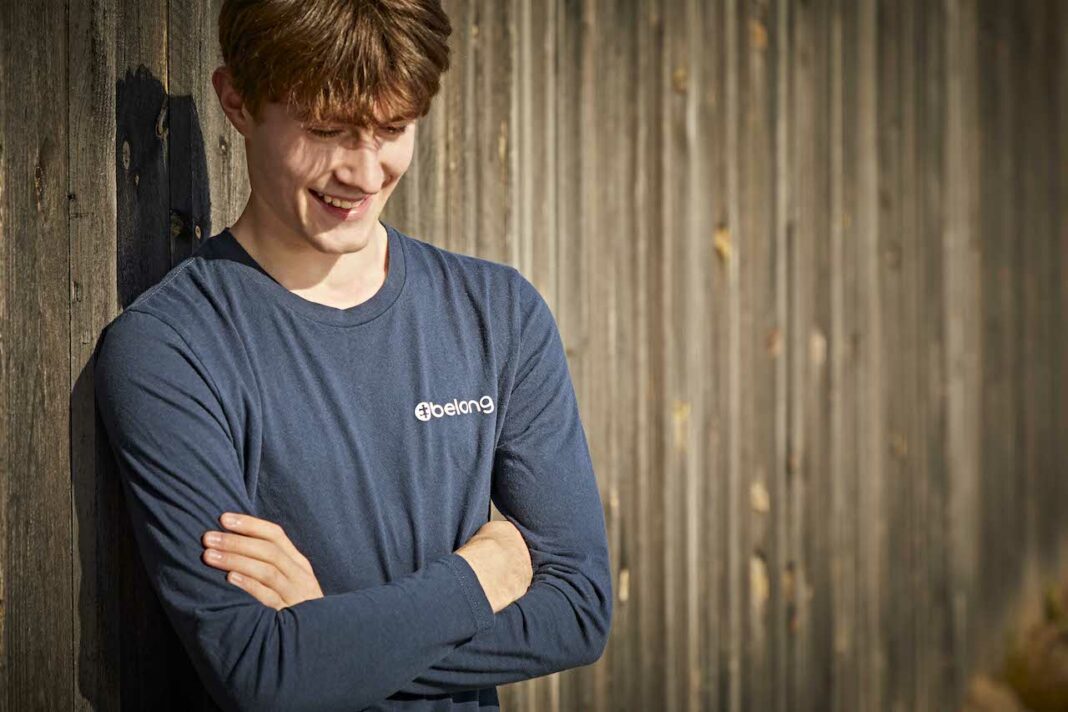 When I think back to what I was like at 17, I have to just shake my head. I wasn’t thinking big picture stuff, starting my own business, or trying to solve any of the world’s problems. I was just a typical punk teen doing typical punk things to fill my days. Thank god for self-assured 17 year olds like Gabe Rossitter who fill their days making differences instead of trouble. He’s one of the coolest kids I’ve spoken to in a long time, one who’s got his head on straight setting out to make positive changes.

Having just finished grade 11 from OSDSS in Owen Sound, he’s already started his own apparel business that is making a significant impact in the area of mental health. Belong is a slick new clothing brand that brings awareness to mental health.

“I’ve met a lot of kids and seen a lot of things in the halls, and I wanted to raise awareness to that,” says Rossitter. “I want people to understand that it’s not always a good experience in high school and it’s okay to have ups and downs…everyone has bad days and it’s completely normal.”

He aims to shed more light on the highs and lows young people go through. “It’s completely human,” he says, and emphasizes that we shouldn’t stigmatize people when they are going through a low point. Instead, we should be there to listen and provide help.

Belong donates 10% of each purchase to the Canadian Mental Health Association Grey Bruce – Mental Health and Addiction Services. He built his company on the four pillars of Inclusivity, Hope, Health and Awareness. Each pillar is close to Rossitter, as is his logo.

“When I was choosing a logo, [the puzzle piece] really stuck out to me,” he says. He loves when people ask him about its meaning. It’s a symbol that there are many pieces to life that need to fit. Every piece belongs to the overall picture. It looks great on his tees, hoodies, long sleeves, hats and masks.

“First thing was to find the ‘why’” he says. This is where he was able to pair his desire for social change with his passion for entrepreneurship. “I’ve always wanted to start my own business. I wanted to start something that would pair up with an important cause…I wanted to bring some meaning to it.”

His idea was born out of a brainstorming session with his uncle before the pandemic hit, but Belong wasn’t up and running until summer of 2020, when mental health numbers were hitting record highs. “The stats for mental health have just gone through the roof during this pandemic, and it just makes me feel sad,” he says. “I feel for all the families and people who are struggling.”

His uncle, Chris Sinclair, an entrepreneur himself, provided guidance along the way. They devised the concept while on a trip to Cuba, and shortly thereafter Rossitter put together a fifteen page business plan for a grant application. Collingwood’s Small Business Enterprise Centre stepped up with funding and mentorship. From there he developed his website and Shopify account and Belong was officially launched.

“It took so long,” he remarks about the business plan and laughs (this makes me feel a little better, seeing as I still can’t put together a dang business plan, let alone a proper grant application). Gabe Rossitter is equipping himself to be the kind of person we need in this world: a young adult with ambition and a strong moral compass.

“I gotta say, it’s been one of the most amazing experiences of my life,” he says. His passion is infectious and you can’t help but want to spread his positive message.

He was nervous in the beginning, as every business owner is, but once he got rolling and began spreading his message and gaining experience, he became more confident. “It’s so great to have your own business and the experiences that come with it.”

He is happy with the sales, but he’s quick to note that this passion project belongs to something higher. “When you have people reaching out to thank you for what you’re doing, that’s more than money,” he says. “I’m doing this for the experience, not because I want to make some money.”

And what’s clear from talking to Rossitter is that he is only getting started. He’s getting a taste of what it feels like to make a positive social change and it’s exciting to see what he’ll do next. But for now, he’s focused on working his job as a front desk agent at Cobble Beach. I’m sure that during his lunch breaks, he’s brainstorming his next big business idea.

Check out his website at Belong to find his mission, vision, and most importantly, his clothing line.