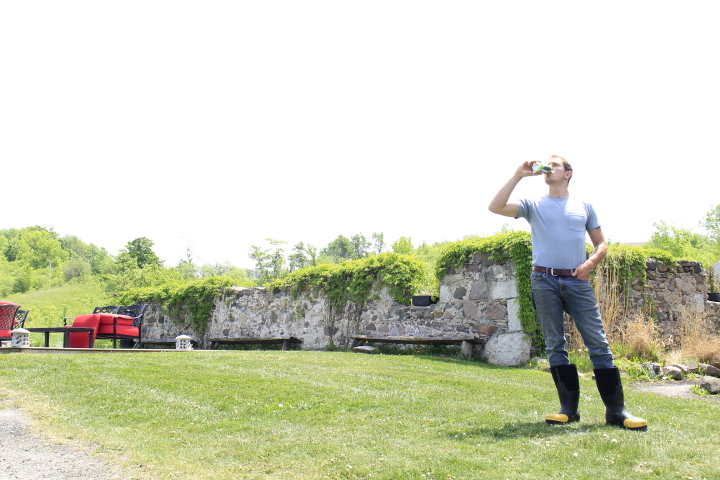 Joel Loughead strolls out to greet me wearing big rubber boots and a beaming smile. He’s carrying two cans of his Hopped Cider, the second ‘child’ in his Forbidden Family. It’s a Family he’s been raising at the Coffin Ridge winery for a few years now, and the resemblance between each sibling is their “clean, crisp qualities and a tart, bright edge,” he explains.

The third edition of the Family, a raspberry infused cider called Forbidden Pink, is being introduced Saturday, June 9 at the Three Pigs One Chef event at the vineyard grounds and he’s excited for people to try it. “I wanted to make a cider that was home in the Forbidden brand, which is…really colourful, playful to look at in the glass,” he says. “Just fun. One that you want to grab another one or two of.”

It’s clear that Loughead loves talking about his Family. And after a brief exchange about what landed him as the cider maker at Coffin Ridge, it’s also clear he’s not your average cider maker.

We continue our conversation on the stunning patio that faces the sloping hills to Georgian Bay, and as we cheers our chilled cans to a warm, sunny afternoon, we both get lost in the view for a second. “I genuinely think this is one of the nicest patios in the province,” he says. “How could you have a nicer patio than this?”

I agree. It’s easily one of the best. And while we’re on the topic of best’s, their restroom is right up there too. When I came out for a glass of the Maple Rosemary small batch a few weeks ago, I was tempted to spend a few hours watching Ghostbusters in the spacious lavatory until I remembered that my girlfriend was waiting for me outside.

It’s no longer a secret that this region is producing great wine – according to Wine Country Ontario, the Georgian Bay area is now considered an emerging region in the wine industry and Coffin Ridge was the first to plant vines in 2001. They’ve since expanded from 5 acres to 25. And others have followed suit.

Joel Loughead has seen the writing on the wall for the cider industry, and he’ll happily tell you his vision for this area. “I was so confident that cider was going to take off, I knew that Georgian Bay would be to cider what Prince Edward County is to wine,” he says. “What’s really holding us back now is that no one is growing cider variety apples. We’re 15 – 20 years away, but when it happens, things are going to change.”

Right now, Coffin Ridge is shipping their cider all across Ontario and to Winnipeg of all places (Jets fans are cider fans I guess) and Lougheed is trying to keep up with demand. “Appetite for cider is doubling annually in this country,” he says. “We can’t keep up.”

“Even though we’re the most impoverished generation, we’re also willing to pay top dollar for good things”

It’s a good problem to have and one he believes is being driven by Millenials (who apparently haven’t ruined everything after all). He believes they’re the reason behind the surging craft beer and cider trend in North America.  “Even though we’re the most impoverished generation, we’re also willing to pay top dollar for good things – for local, handmade things,” he argues.

But Loughead never set out to become a cider producer. He doesn’t even have a formal education in the industry. He has a degree in philosophy and English Lit, but through his love for cider, lots of research, and a few years of experience, he’s worked hard to become the leading cider maker in this area.

As someone with an English degree myself, I can relate to the struggles of finding your way in a world that devalues a Liberal Arts education, but he tells me there are actually many winemakers in the world with such degrees.  “There’s a long history of philosophy and philosophizing throughout the history of wine making going back to the Symposium, which literally means ‘to get drunk together and think about things,” he says. Sounds like a lot like my twenties – I would’ve fit right in at the Symposiums.

“The apples are the canvas and you can paint them as you please.”

He’s also a guy who likes to connect with other young entrepreneurs in the area. He’s taking part in the Apple Pie Trail with other regional partners to promote the ‘apple’ business in the area. And when Coffin Ridge needed a caterer for the cider launch three years ago, Loughead knew that the Mexican restaurant Casero was the perfect fit. “Its a great partnership,” he says. “Mexican food, especially their style of Mexican food really compliments cider well.” And both organizations are injecting a youthful, cosmopolitan vibe into the area. “I like to think that we’re doing a similar thing as them out here.”

Our lunch hour was winding down, and it came time for my final question: the culmination of the two major elements of Joel Loughead. I had to know what his philosophy of cider making was. Was he a rationalist or an empiricist? Did he borrow from the Kantian school, or possibly apply Plato’s theory of forms to the essence of the apple?

“[Cider] can be anything you want it to be” he says after thinking for a second. “Cider is brand new. Some treat it like wine, some treat it like craft beer. As a cider maker what I love to do is navigate that space and take the best elements of both of those worlds”

Aha! I sense a bit of Hegel’s Dialectics in there! Wine is the thesis; beer is the antithesis; and Georgian Bay cider is the synthesis. Or maybe I’m full of crap, because I only took one or two philosophy courses in school.

Either way, I think Loughead says it best when he declares poetically that “the door’s wide open. The apples are the canvas and you can paint them as you please.”

And with that being said, we both realize we’ve finished off a can of the Forbidden Hopped and we both have work to get done. I could have sat there looking over Georgian Bay for the whole afternoon on one of the best patios in the province. Instead, I decided to use one of the finest restrooms in the province before heading out, and maybe catch the last half of Ghostbusters playing on the big screen.