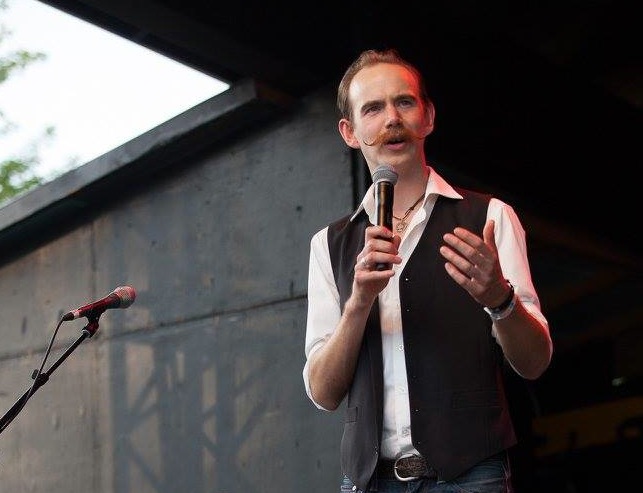 Summerfolk volunteer Jon Farmer is headed to Kansas City Missouri after being awarded the inaugural Gene Shay Scholarship from Folk Alliance International. The award – named after legendary Philadelphia DJ Gene Shay – recognizes a DJ with between one and five years of experience who is programming folk and world formats. The prize includes registration and travel to the annual Folk Alliance International Conference taking place this month. Farmer is the founding host of Summerfolk’s one-hour radio show Georgian Bay Roots, heard weekly on 560AM CFOS in Grey and Bruce counties and available as a podcast.

Summerfolk launched Georgian Bay Roots in September of 2016 to share the music being made and played in Grey and Bruce counties as well as folk and roots music from across Canada and around the world. The episodes often feature interviews with acclaimed performers and local musicians as well. Farmer hosted the show for its first year but last fall three additional hosts joined the team and all four now take turns hosting.

Farmer began volunteering at the Summerfolk Music and Crafts Festival in Owen Sound while he was still in middle school and has been a regular face at the festival since. Summerfolk patrons will recognize him from his role as a mainstage emcee in recent years, introducing the Youth Discoveries Winners and hosting the main Amphitheatre stage on Sunday night. Although Farmer has attended Folk Music Ontario conferences as a volunteer in the past, this will be his first trip to an international conference.

“I didn’t think I’d win” Farmer said, “but I’m beyond excited to be going to Folk Alliance; I’ve listened jealously plenty of times while other people talked about it”.

Like any other DJ, he’s most excited about the music. “There are a number of acts showcasing officially that I’m a big fan of but I’m more excited knowing that I’m going to stumble on entirely new acts and musicians that will blow me away,” Farmer added.

Folk Alliance International was founded in 1989 and is one of the five largest music industry conferences in North America. More than 2,700 musicians, managers, artistic directors, producers, and members of the media attend for the four-day event each year. The days are packed full of musical showcases at official stages and in unofficial venues like hotel rooms, stairwells, and the hallways of the conference centre.

Farmer expects to come back with new music and interviews for Georgian Bay Roots. That new material will be on display when he takes his turn behind the microphone in March.