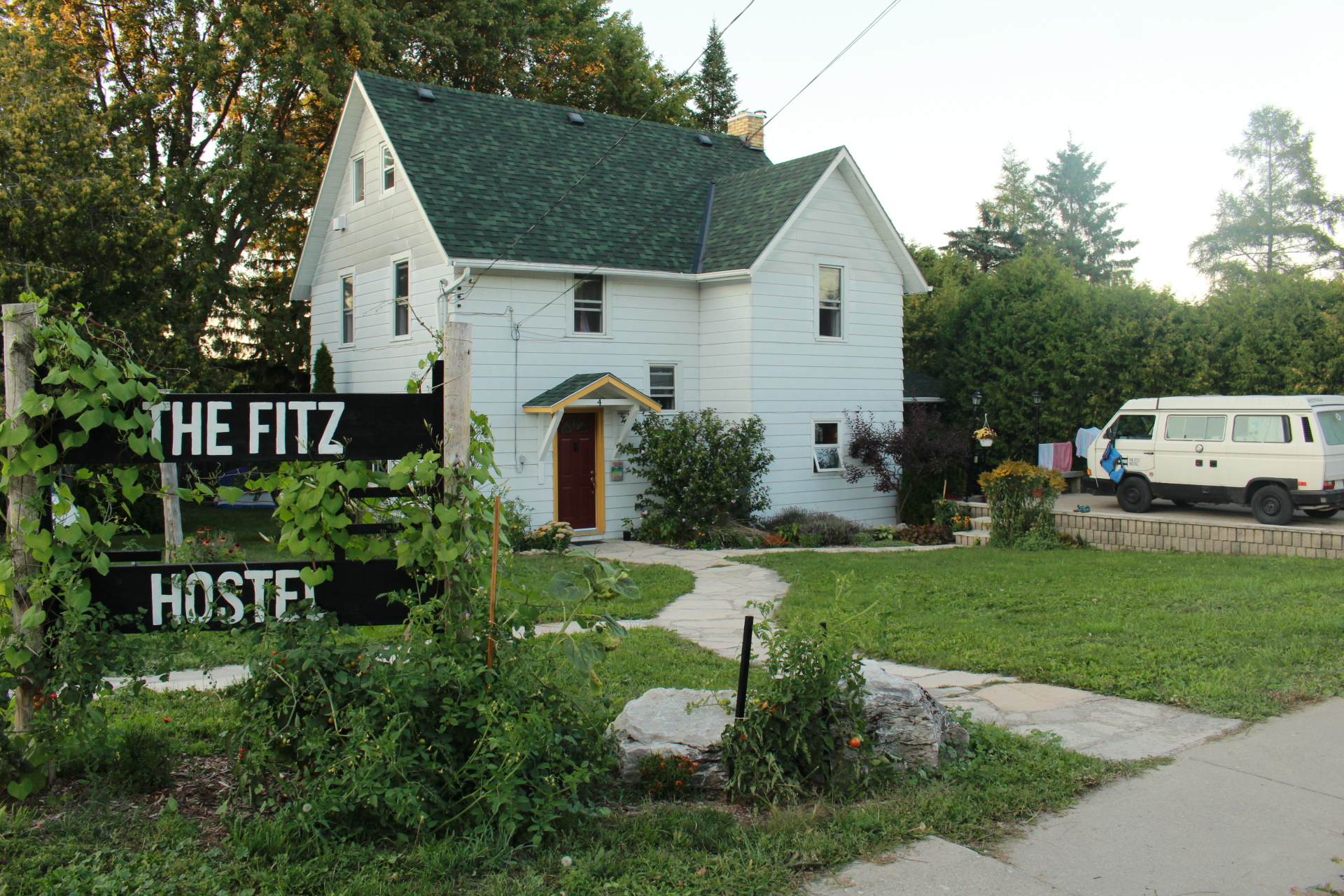 “Are you making millions of dollars yet?” Richard asks as he enters the kitchen. He belongs to a group of twelve hikers from Hamilton staying at the Fitz Hostel in Lion’s Head for the weekend.

The Fitz is a cool, three bedroom hostel in the heart of the tourist mecca halfway up the Bruce Peninsula. It’s positioned only steps away from the main beach in Lion’s Head and the gorgeous cliffsides that elevate the Bruce Trail and attract heaps of mountain climbers, and all types of paddlers. Megan Myles, a young entrepreneur, who is a fourth generation Lion’s Head–ian, has traveled the world the past few years to experience hostels in other countries and has returned to her picturesque home town with new energy and a focus to bring more young people to the area.

Richard is standing in the kitchen waiting for an answer, probably one that the typical person would give, something like ‘not yet’ or ‘I wish’. But one thing I have learned from getting to know Megan is that she’s not your average person.

From getting to know Megan, it is clear she is not driven by money, but by social and environmental change.

Then she pauses for second from cutting up the fresh tomatoes she picked from her garden and offers me a beer. It’s a home brew from her outdoor fridge that sits beside the pool table. She shows me around the hostel, the first and only one in Bruce County, and from what I can discern, the first and only in Grey/Bruce/South Georgian Bay.

I’ve spent many hours of my life inside hostels; they hold a special place in my heart. They’re a place I’ve made long-time friends, fallen in love, jammed with strangers, played drinking games, won pool tournaments, read classic novels, and taken many naps. The Fitz reminded me of the hostels I’d stayed in over the years in countries all across the world. I felt right at home.

The space was welcoming, with an open concept that spilled down into the main hangout area with a long kitchen table ready for lively dinner conversation. Both the front patio and the backyard offer chill spots to hang out and relax after a day exploring the Bruce.

As for me, I couldn’t come up to Lion’s Head and not explore its coastline a little on a such a beautiful day, so we threw our paddle boards into her VW Westy and headed out on the bay. The waters were busy with all sorts of paddlers, the cliffs were crawling with climbers, and the trails above were spotted with hikers overlooking the bay.

We returned to the Fitz, and while we listened to KC and the Sunshine Band on the Megan’s amazing, old Hi-Fi record player, I asked her about her recent adventure doing what many people, including myself, have dreamed about: opening a hostel.

The following interview has been shortened from it’s original length.

What makes a good hostel?

(Megan) I think it’s actually pretty simple….clean and friendly and…a good vibe. And I don’t really know how you create vibe. It’s in part architecture but then also little details as well. And to be honest, this (The Fitz) has all turned out better than I expected…definitely lots of love, lots of community support. During the reno phase it was anywhere from 5 to 10 people here gathered around the harvest table everyday having lunch, helping out. So I think with that much community support and love going into something, then of course there’s gonna be good vibes.

Why should people come to the Bruce Peninsula?

(Megan) They probably shouldn’t in the weekends in July and August (laughs). They should come in the winter-time because of the amazing skiing…the scenery doesn’t go away. It’s here 365 days a year. In this day and age, we all battle with our phone and internet addictions this fast paced lifestyle, we’re working more hours than ever, there’s this huge need for people to reconnect with nature and slow down. Not only do you have the Bruce Trail and Niagara Escarpment or UNESCO biosphere reserve, stunning Georgian Bay as well as Lake Huron on the other side [there are] unlimited opportunities in terms of hiking and paddling and climbing and skiing.

You’ve named your hostel after a pivotal, historic figure in this area, Captain Fiztwilliam Owens. Why is it important for you to include a historical aspect?

(Megan) I was worried about the legacy of old white guys dying out so I needed to reinstate that. (laughs).   I actually got some people giving me shit for that, saying ‘you’re naming it after another dead white guy?’  Someone suggested the ‘Myles End’ because my last name is Myles, but I don’t know – I just felt like that was too self involved and egotistical – this isn’t about me, it’s about whatever evolves within these walls.  In the end I decided on the Fitz because it’s short and sweet.

What types of difficulties have you encountered in your first year?

(Megan) There were definitely obstacles…initially in the start up phase, the bureaucratic process was not as clear as it could have been.  You’re quickly reminded that…. hostels aren’t that popular in Canada. The municipality and building inspector were really trying to help me figure out what’s necessary but they just didn’t know. There’s no hostel category in the building code….I basically followed the path of least resistance and saw the BnB provisions so at the end of the day, that’s where I kind of sit now. That works for now.

Amidst all the community support there is a certain degree of uncertainty…when something new comes about that people don’t know what it is. I’ve been trying to do as much as I can to get local community members into the space and to come by. Always the invitation has been open to drop by. First and foremost, I’m passionate about bringing people together and creating a positive social space.

Where do your guests seem to be coming from?

(Megan) I was expecting mostly GTA and actually in my first couple months of being open it’s been way more international than I expected. The UK, Germany, France. Quite a few Europeans and in the fall I expect that to continue.  Lots of new Canadians for sure. It’s pretty neat to have this constant flow of people coming through in a small town that doesn’t traditionally have much diversity. In the morning, if you feel like there’s someone interesting to talk to you can just sit down with someone and chat to them for 20 mins and get their perspective.

What are some things you’ve seen at other hostels that you have wanted to try at The Fitz?

(Megan)   Morrocan hostels are very interesting but one thing that they did have down was the hospitality piece. You’d go into anywhere and their gesture of hospitality is asking if you want a mint tea. The one guy I worked for…just hammered that away: “Don’t start the check in process right away. Let them sit down and have a cup of tea.” You just have to gauge each person and what their agenda is. The events board behind reception with a bunch of events, not only does that give visitors things to do….but it also showcases the community. It represents how diverse the community is. People who go to hostels tend to want to immerse themselves in the local area.

What’s the best hostel you’ve ever stayed at?

(Megan) I remember staying at this cool boutique hostel, this trendy, hipster places in Madrid.  definitely very clean, everything was brand new. In the dorm rooms themselves they had a bathroom which was really nice. They had a rooftop bar. There were definitely artistic touches. There was one in Denmark, which was self-check-in. That was a neat concept. I liked that you were treated like an adult. It’s the concept of trust.  I’m sharing my house with people, so if I didn’t trust people I’d be paranoid and anxious all the time.

I think it’s a neat kind of experiment because it’s the direction we need to be going in. If we want to protect what’s here, we have to be low impact. We’re a UNESCO biosphere reserve, we want to protect this area for future generations. So far we’re in the early phase (at the Fitz) so I haven’t implemented everything I’d like to. Trying to encourage people to car pool or…. [possibly] giving a discount to car-free travelers, so either cyclists or hikers. A friend of mine has just built a net zero home in town with high fast charging station for electric cars and he has opened that up to any hostel guests who come with electric cars – they are welcome to charge their cars for free. I‘m also renting bikes….and trying to make the peninsula an easier car-free place to be.

I say ‘Please keep our Great Lakes great, please reuse your towel” Sometimes people just don’t think of it. I’m thinking we should probably eliminate plastic water bottles so I might get some cool reusable Fitz water bottles designed just tell people when they check in. Not only do I tour them around the hostel but also that education piece or stewardship piece. Say ‘hey if you brought plastic water bottles, keep ‘em in your car.’

Where do you see the culture of hosteling in Grey/Bruce/South Georgian Bay in ten years?

(Megan) I made the comment….about the idea of the hostel hop or the hostel trail: in general I think a collaboration would be beneficial. Already I’m working with the other hostels, there’s one on Manitoulin Island and we’ve sending people back and forth and they even stopped in here to visit and check it out…there are two hostels in Algonquin and they sent my info out to all the outdoor hiking groups and that was incredible.

Using the Camino de Santiago as a model, there’s auberges every five or ten kilometres so you walk a day and there’s a place for you to sleep that night you basically bring your sleeping bag, so that could be a model for the Bruce Trail as well. Hopefully, it plants the seed for alternative accommodations and a different way to travel and I think every good tourist destination has a variety of accommodations. I look forward to working with people who want to start something up to make sure we all move in the same direction in creating positive spaces.

To book a room at The Fitz, click on the following link:  The Fitz