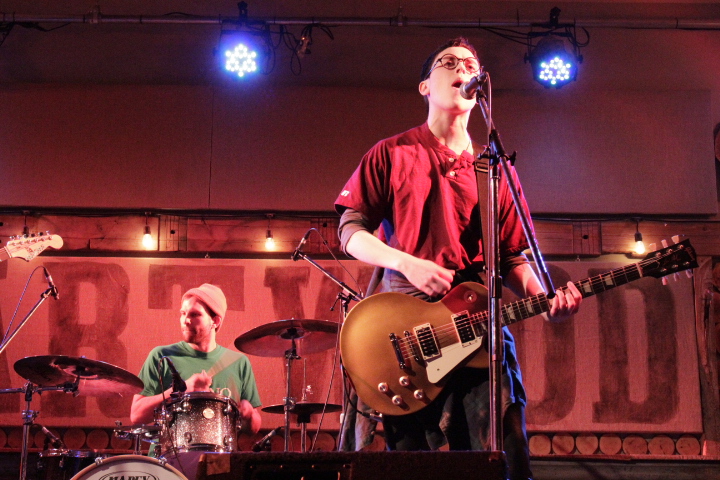 I go into Lupercalia every year with two things: ignorance and an open mind.

I didn’t know any of the acts on the bill, and that’s just the way I wanted it. It was the same last year and I walked away a big fan of WHOOP-Szo, Woodshed Orchestra, and L-Con.

I did the same on Friday night and ended up listening to Witch Prophet all day Saturday while preparing for another night of getting Lupie. I tried to avoid learning too much about Partner before their show, but it was hard. They’re getting some serious buzz across Canada right now.

Even during the Roundtable Discussion I attended in the afternoon, one of the four facilitators, Becky Dier-McComb, mentioned how cool it was that while no one could get tickets to their sold out shows in Toronto, she was able to see them play in her home town.

She mentioned this while discussing the focus for this year’s festival – women and children – and all the amazing and talented female artists that had graced, or would grace, the stage. But the discussion was intended to address the barriers, pressures, and sexualization of women in art. I’d like to say I took part in this discussion, but that would be a lie. I listened. And there were some important things to be said, especially by the four facilitators of the conversation Lauren Best, Becky Dier-McComb, Jenna MacLellan, and Charlie Petch, who all had unique perspectives on being female or trans in the arts.

The next event was held in the store below Heartwood Hall, a warm home-decor environment, where Joyful Joyful left audience in awe (seriously) with a sound I would call ‘Irish sea chanty meets synthesizer and reverb’. This was a real nice surprise. When Cormac Culkeen launched into Jubilation in a voice that would stop Sinead O’Connor in her tracks, you could hear a pin drop in the store. Dave Grenon’s pedals hovered beautifully behind every track and added field sounds to the bucolic imagery of Oh Valley and waves splashing behind the nautical tale of Three Boats.

After refuelling with some tacos and beer at Casero’s, who graciously gave us a table for 3o minutes (thanks Beth!), we arrived at the Hall in time to watch 15 young people take the stage in what is called Girls Rock Camp. They met at the library on Friday under the guidance of Kritty Uranowski to rock out and ‘camp’ out, and were a perfect alignment of the Women and Children theme. This is the next generation of women claiming space in art. It was impressive to see how talented and brave they were to get up and rock the house after only a short time to prepare. There were many proud parents in the audience.

And speaking of proud parents, the three young’ens in Kingdom of Birds are making it clear that age has nothing to do with rock. Between the ages of 10-15, these three have already played Field Trip, opened for Sarah Harmer, and been featured on Spotify’s Fresh Finds. Their 90s infused pop-rock made me longing for the days of Weezer and Hole again.

The most entertaining band of the weekend had to be the much anticipated Partner. I was expecting something big, and what they delivered was a wall of sound and a loveable stage presence. With their three guitars, they kicked things off with the classic AC/DC It’s a Long Way to the Top (If You Wanna Rock n Roll) and followed with a series of songs about smoking hash, snooping through a girlfriend’s room, the Canadian actress Ellen Page, who does, in fact, look a lot like the lead singer, Josee Caron.

They have a self-desribed sound that is “genre-defying and terrifying; part musical act, part teenage diary, and 100% queer.” Caron is not shy to divulge her personal life in her writing and in her stage banter. She tells us she had a nightmare where she was being sued by JK Rowling for looking like Harry Potter. “It’s not my fault” she says and smiles her Ellen Page-like smile and launches into “Everybody Knows [you’re high]”

“We’ve never played for a sitting down audience,” Lucy Niles says early on, and when they launch into a Melissa Etheridge song, the audience maintains their track record and starts dancing. Caron later comes out into the crowd with guitar in hand and provides one of her killer solos that proves their mantra: “We’re funny, but we’re no joke.” Partner may be goofy, but they know how to rock.

They tell us Gross Secret is the first song they ever wrote and their best, but I disagree. I fell in love with the Adam Sandler-esque Long and MacQuades. It was a fun song to end the night, albeit a little early, at 11pm but there was the after party. Oh yes, night Jesse f—ed over morning Jesse yet again. The Saturday night Jesse doesn’t win as much these days, but he did last night.

Unfortunately, it was past most of the musicians’ bedtimes, so we didn’t see many performers there, and Partner wasn’t there, so I couldn’t tell Caron how much I think she does in fact look like Harry Potter. And reassure her that it isn’t her fault. But I did make sure to thank Philly Markowitz for putting together a kick-ass lineup this year, her first as a Creative Director. She enabled my philosophy of ‘ignorance and open-mindedness’ to live on.